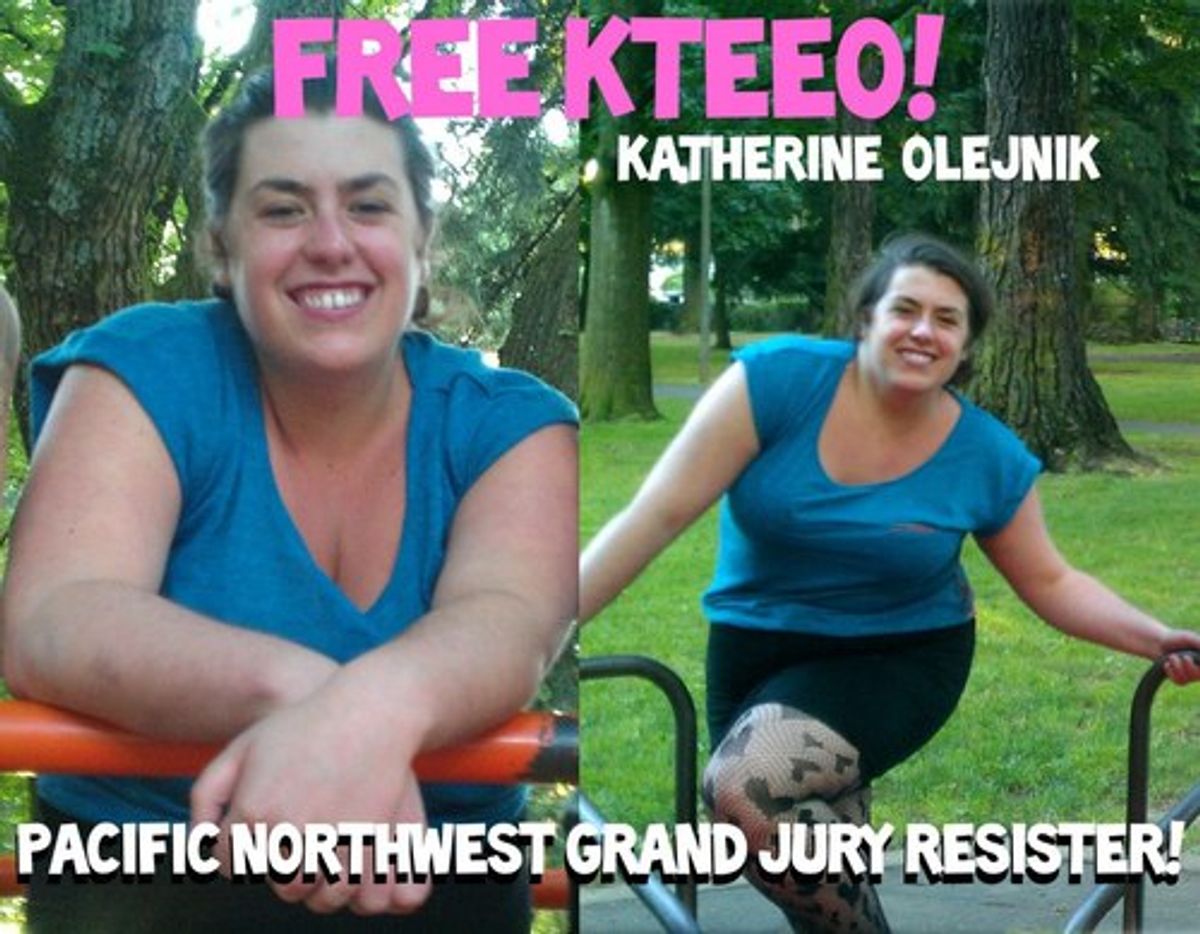 A support poster for Kteeo Olejnik (Committee Against Political Repression)
--

Two anarchists from the Pacific Northwest endured five months in federal custody, often in solitary confinement, without conviction or charges, for simply staying silent. As we noted last year, Kteeo Olejnik and Matthew Duran were among activists subpoenaed by a Seattle grand jury understood to be investigating property damage exacted on the city during May 1 demonstrations last year. Olejnik and Duran, following a tradition of activist and anarchist solidarity, publicly announced their refusal to cooperate with the grand jury. For their silence, they were sent to SeaTac detention center. On Thursday afternoon the two grand jury resisters were freed.

Another young woman, 24-year-old Leah Lynn Plante, was also taken into federal custody last year when she refused to talk. Unlike Olejnik and Duran, however, Plante was released after one week. Anarchist networks following the case feared that Plante's resolve broke and that she had agreed to cooperate when faced with the reality of a potential 18 months or more in prison -- the details of Plante's case remain unknown. Both Olejnik and Duran maintained their resistance and walked free Thursday without having shared information with the authorities on other Northwest activists. Their release came after a federal judge agreed to a request for release issued by Olejnik and Duran's attorneys.

The judge's comments explicitly note the physical and psychological toll of federal custody and the extensive solitary confinement to which the two detainees were subjected. The ruling reads as an unexpected testament to the activists' resilience and the prosecutors' punitive overreach:

Their physical health has deteriorated sharply and their mental health has also suffered from the effects of solitary confinement. Their confinement has cost them; they have suffered the loss of jobs, income, and important personal relationships. They face the possibility of criminal convictions for contempt... both she and Mr. Duran have nonetheless refused to testify.

"After both are released, though, they still could be convicted of contempt of court," the Seattle Times reported. As I explained last year, the imprisonment without charge of grand jury resisters is legally permitted by the peculiar structure of grand juries:

As was the case with the Northwest grand juries resistors, the grand jury can grant a subpoenaed individual personal immunity; Fifth Amendment rights against self-incrimination are therefore protected, but silence is not. In these instances, refusal to speak can be considered civil contempt. Non-cooperators can be jailed for the 18-month length of the grand jury.

A fourth resister, Maddy Pfeiffer, who was taken into custody late last year, remains at SeaTac detention center and continues to refuse to talk. As the resister dictum goes, "No one talks, everyone walks."