Hannity accuses Keith Ellison of "a host of radical connections"

After a dust-up on Fox News, Sean Hannity attacked the Muslim Democrat 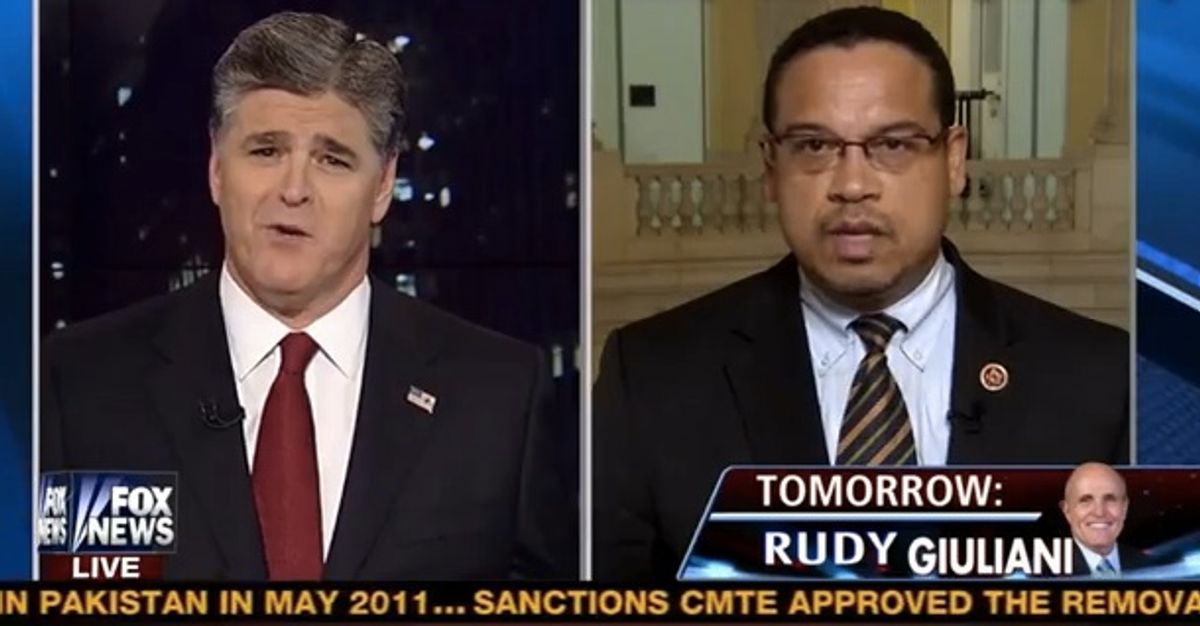 Sean Hannity attempted to tie Muslim Rep. Keith Ellison, D-Minn., to controversial Nation of Islam pastor Louis Farrakhan and his national assistant Khalid Mohammed, following an explosive interview on Fox News earlier this week in which Ellison accused Hannity of being "the worst excuse for a journalist I’ve ever seen" and a "shill for the Republican Party."

In a segment on his show Thursday, Hannity accused Ellison of having "a host of radical connections," and revived attacks made during Ellison's 2006 campaign about ties to Farrakhan and the Million Man March. "The reality is, the congressman not only associated with these radicals – but he spent years spewing their hateful rhetoric,” Hannity said.

He continued: “What is the difference, I mean, do we have somebody then in Congress that is the equivalent of one side of what the Klan is? Because I view the rabid ranting of Khalid Mohammed as frightening in terms of racism, anti-Semitism.”

As ThinkProgress reports, Ellison addressed his work with the Million Man March and Farrakhan several years ago:

In the late 1990s, Ellison worked with the group to organize the Million Man March, but apologized for failing to “adequately scrutinize the positions and statements” of the Nation of Islam and Farrakhan six years ago in a letter to the Jewish Community Relations Council of Minnesota and the Dakotas.

“I wrongly dismissed concerns that they were anti-Semitic,” he wrote, adding, “They were and are anti-Semitic and I should have come to that conclusion earlier than I did.” “I have long since distanced myself from and rejected the Nation of Islam due to its propagation of bigoted and anti-Semitic ideas and statements, as well as other issues.”

MediaMatters points out that this is not the first time Hannity has attacked Ellison for reasons related to his religion. In 2006, when Ellison was sworn into office and took his oath on a Quran, Hannity compared it to using "Hitler's 'Mein Kampf,' which is the Nazi bible."

In advance of the segment, Ellison's office sent out a statement calling Hannity's attacks a "smear."

"Tonight on Fox News, Sean Hannity will be airing a segment designed to smear Rep. Keith Ellison’s record," wrote Ellison's communications director Jeremy Slevin. "We need as many of our friends as possible supporting Rep. Ellison and helping him stand up against right-wing hate."