Mohsin Hamid discusses his new "self-help" novel, illuminating the beauty of a land we see only as a danger zone 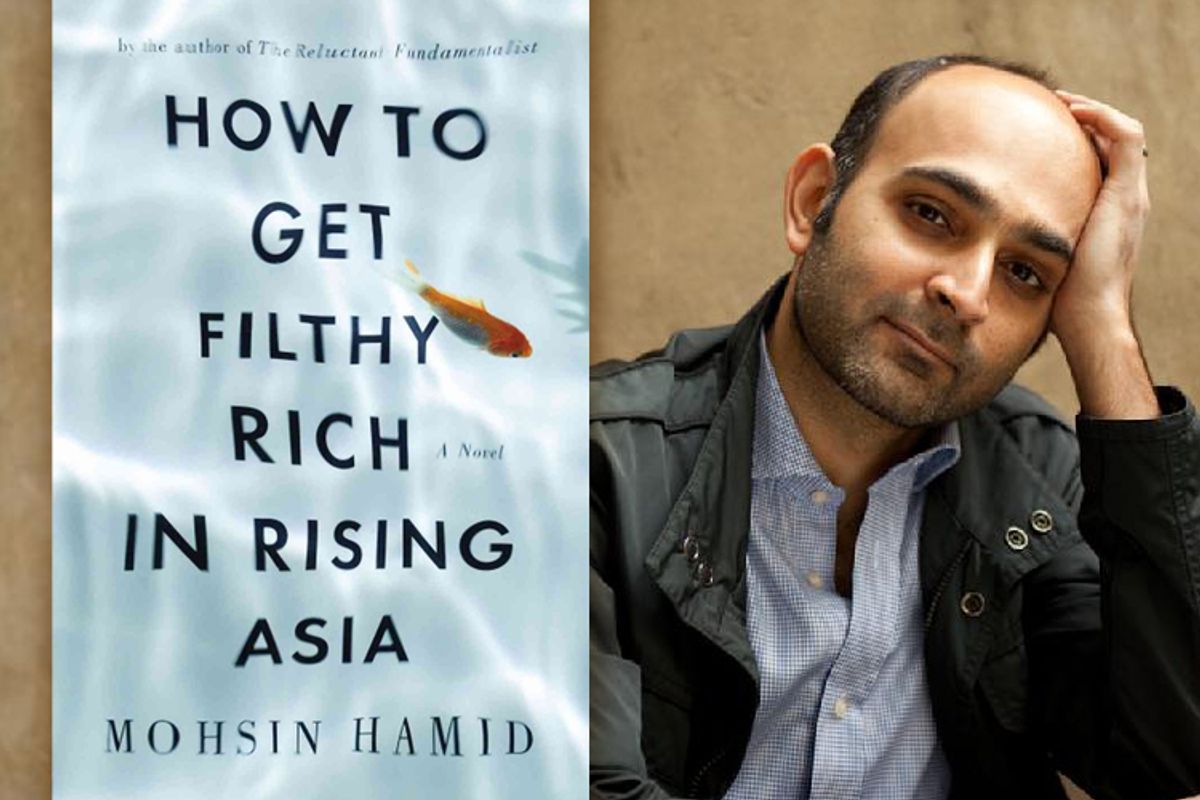 You Think You Know Pakistan

When you think of Pakistan, acclaimed literary fiction is not your first thought. You’re thinking of the ubiquitous nation of 180 million that bleeds daily and leads sensationalist headlines declaring it the world’s “most dangerous place,” a title often  accompanied by encouraging descriptions such as “terrorist haven,” “chaos,” “explosive,” “nightmare,” and “failed state.”

You know Pakistan as the moody, unhinged sister of India, which hennas itself with ghastly violence seeped in extremism and sectarianism.

However, if you look beyond the increasingly grim and sordid headlines and peer deeper into history, you will discover a Pakistan of brilliant, artistic richness as heard in the Qawwalis mastered by the late, great Nusrat Fateh Ali Khan or the philosophical meditations of Urdu poets Iqbal and Faiz.

Turn to the present. You are now witnessing the rise of a new wave of Pakistani authors writing fiction in English. They are informed and influenced by the unique challenges and cultural specifics of modern Pakistan, but they are grounding them for international audiences in universal themes of identity, love, religion, politics, class and family.

You will now be reading a conversation conducted with one of their most acclaimed peers, Mohsin Hamid.

Figuring Out How to Get Filthy Rich in Rising Asia

“I don’t know how to write the books I’m writing. I’m trying to figure them out as I go, which of course is based on Pakistan,” confesses Mohsin Hamid, the author of "How to Get Filthy Rich in Rising Asia," his third novel. But he deliberately avoids all references to Pakistan, or any country, as its specific setting.

Judging from the worldwide success of his previous two books, Hamid has been fortuitous with his literary experiments: "Moth Smoke" (1998) was a finalist for the PEN/Hemingway Award and "The Reluctant Fundamentalist" (2007) was shortlisted for the Man Booker Prize; its film adaptation, directed by Mira Nair and starring Riz Ahmed, premieres in the spring. His latest work is a taut, exceptionally well-written, lightning-paced satirical dissection and examination of a young man’s lifelong journey from poverty to economic success in modern South Asia that surprisingly evolves into a profound and moving meditation on love and mortality.

The Writer’s Dance With “You”

Written entirely in the second person, the book is structured as a self-help book — with titles like “Befriending a Bureaucrat” and “Be Prepared to Use Violence” — similar to those found in Karachi, Lahore or Delhi devoured by young students and professionals seeking the instant-millionaire elixir.

“A jokey premise became the heart and soul of the project,” says Hamid.  Like his previous novel, "The Reluctant Fundamentalist," where the protagonist relates the entire story to a silent, unnamed American, Hamid is committed to continuing his novelistic “dance” — his attempt at removing veils to achieve greater intimacy between writer and reader.

“I allowed there to be a ‘you’ – the ‘you’ of the reader – and the ‘I’ of the writer, who is me speaking to you,” explains Hamid. “So 'How to Get Filthy Rich in Rising Asia' functions as a story but also [as] a direct conversation between two people: the reader and the writer. I think that’s the one thing fiction can do. It’s important for me to exploit the form to its fullest and do what can’t be done in other forms.”

For Hamid, this self-help book became a “self-help exercise” and spiritual activity allowing him to deal and reflect on pressing personal issues, such as the cycle of life, death, mortality and family. Like Sufi poetry, which Hamid considers an “attempt to address spiritual themes through the poetic form,” this novel for him “became a way to address spiritual concerns without using the notion of a spirit or using religion, but still using art and literature as a way to do that.”

The novel is also acutely informed by modern life in Pakistan. The deliberate vagueness of the setting and the characters’ names – for example, the protagonist’s lifelong love interest is simply known as “the pretty girl” – frees Hamid to “write about Pakistan without being constrained by the stereotypes and assumptions that I’ve absorbed from reading other people writing about Pakistan.”

One stereotype of South Asia concerns itself with a romanticized vision of exotic escapism, a land of Bhangra, mangoes, spices, outsourcing, Kama Sutra and Bollywood dreams. The other paints it as a cesspool of human misery and crushing poverty. Hamid’s novel reveals the nuances and layers behind the extreme depictions while also commenting on the significant stratification of a society where A.C. is a luxury and the English language is worn like a Prada bag.

“This time, I wanted to take a bigger canvas in a way that sliced society into almost 12 different socioeconomic levels,” explains Hamid. “From ‘dirt poor’  to ‘village boy’ to ‘quite poor city dweller’ to ‘relatively poor’ to ‘middle class entrepreneur’ to ‘middle class guy with his own business’  to ‘well off guy.’ I also wanted to chart a life to old age. I thought if I could chart Pakistani society up in terms of a life and socioeconomic categories, I could try to capture a bigger canvas of what a society looks like.”

Pushing “Us vs. Them” Religion

Another popular topic in the mainstream media revolves around Pakistan’s ongoing dysfunctional relationship with religion. In addition to frequent, disruptive terrorist attacks of Taliban and al-Qaida, Pakistan reels from Sunni-Shia sectarianism, which recently added 89 Shia civilians in Quetta to the ever-growing list of victims.

The tragedy endures that Pakistan was “founded” in 1947 by Muhammad Ali Jinnah, ironically a Shia, as a secular, democratic, Muslim majority state, but in 1956 was aesthetically branded an “Islamic Republic,” and subsequently written as such in Pakistan’s 1973 constitution by the government of Zulfikar Ali Bhutto, also a Shia, who further attempted to appease right-wing fundamentalists by declaring the minority Ahmadiyya Muslim community as “non-Muslims.” Under the religio-fascist boot heel of dictator Gen. Zia ul Haq, Pakistan survived the forced, suffocating “Islamization” period of the 1980s, whose progeny includes the Taliban and other extremist, fringe visions of Islam that now dominate the landscape.

“When you think about Pakistan and religion, my concern is this attempt by the state or various private actors to push the first type of religion — the differentiating ‘us versus them’ program of ‘I’m right and you’re wrong, you’re my group and he’s not!’ — which has many negative aspects that are often talked about, such as terrorism, violence and extremism,” says Hamid, who has no interest in that aspect of religion nor is “inclined or sympathetic towards that type of group identification – whether it’s religion, racial, nationalistic or about what passport you hold.”

Hamid says the second side of religion, the spiritual side, suffers in Pakistan as a direct consequence of such forced religiosity and compartmentalization. He remembers a better time when his grandparents, who prayed five times a day and fasted, whose Islam was a “deeply personal thing for them,” never felt compelled to even have one conversation about religion with him. In the near future, the writer hopes to see a “Pakistan that allows religion to be at the mercy of its own people.”

An Unofficial Cultural Representative of 200 Million

Speaking of Pakistani people, Hamid’s fame has cast the spotlight on him and his fellow novelists as unofficial cultural ambassadors of nearly 200 million people, a burden he rejects but admits, “It’s something I try not to feel but probably do feel.”

He acknowledges there are “very troubling crisis in Pakistan,” but also praises the country as a “vibrant and functioning society that is evolving and developing and changing in many ways.” His challenge, which he accepts, is to “keep wearing down these overly simplified notions of what Pakistan is without being trying to be a Pakistani apologist or Pakistani propagandist.”

In this quest for nuance, he must navigate some of his most vocal and fierce critics: fellow Pakistanis who demand a more positive vision of Pakistan they rarely see reflected in Hamid’s troubled characters.

Pakistani Artists Are a Sign of a Healthy Society

“That’s a sign of a healthy society and not a sick one,” says Hamid.

However, don’t tell or ask Hamid what Pakistani artists “should” currently be doing with their talents and resources: “In a country which has such a powerful set of often oppressive ‘shoulds’ shoved down the throat 180 million people, a part of what artists do is reject the idea of ‘should’ and create the art they want to create … In a place (like Pakistan) where many are fond of limiting self-expression, just the attempt at self-expression is invaluable.”

Hope For a Happy Ending

You are nearing the conclusion of this interview and, like most narratives concerning Pakistan, are probably expecting our end to be dour, unpleasant and flammable. However, unlike Hamid’s previous novels, which were coated with despair and unease, "How to Get Filthy Rich in Rising Asia" has fulfillment and hope, even a relatively “happy ending” – within limitations – that is believable and well-earned.

“There’s too much negativity and cynicism when talking about Pakistan,” says Hamid.  “I didn’t want to ignore the very real problems in Pakistani society, and this novel talks about that, but I wanted to combine it with some element of hope, redemption, and it’s important for me to inject that into the world, into my own life and into my own art.”

With that, we hope you have enjoyed our dance.