Portrait of a powerless man

There's only one way for Boehner to save Republicans from themselves on the sequester. And it's going to be ugly 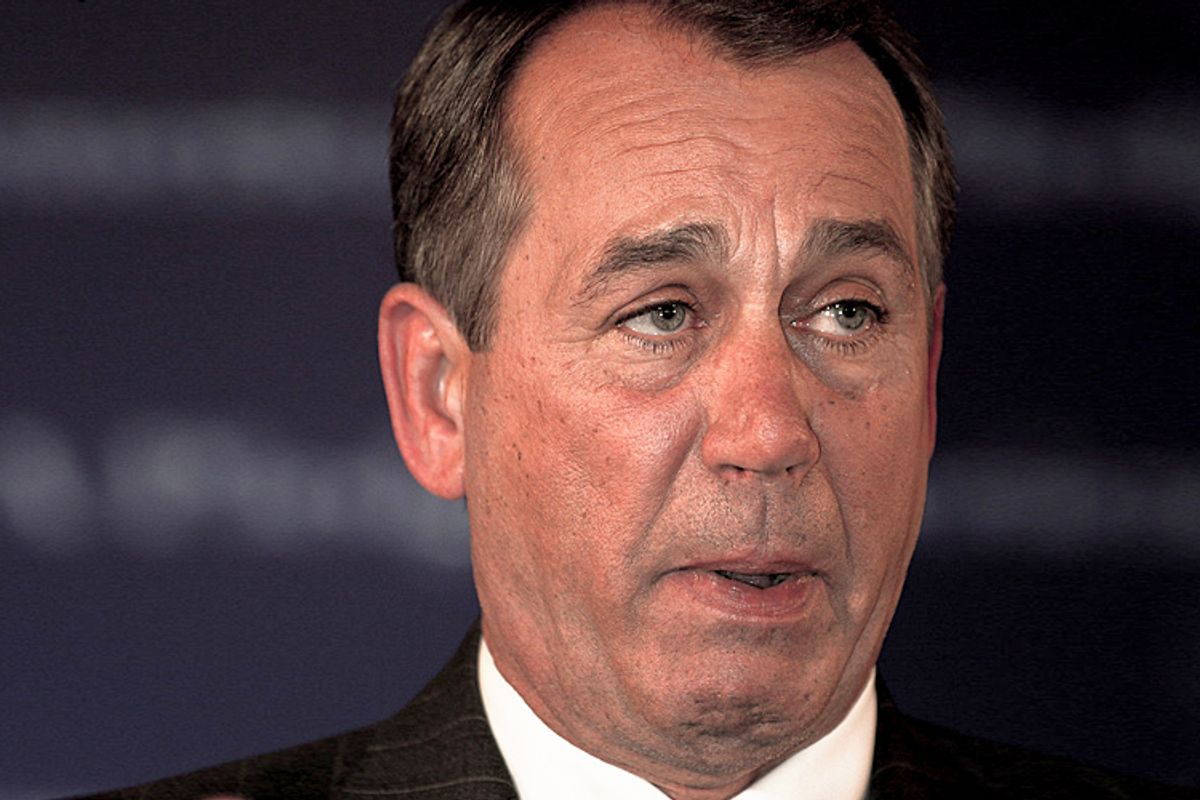 Why does John Boehner subject himself to this?

Not for the first time this year, and probably not for the last, the speaker allowed to the floor on Thursday a major piece of legislation that a solid majority of the Republican Conference voted against, that passed mainly on the strength of Democratic votes, and that the Obama White House will now trumpet as a major achievement. The bill at hand was the Violence Against Women Act, which had easily passed the Senate only to meet with fierce resistance from conservatives in the House. In the end, 138 House Republicans went on the record against it, while 87 backed it. Among Democrats, meanwhile, there wasn’t a single “no” vote.

We saw this same dynamic at the start of the year, when the fiscal cliff deal passed with just 85 Republicans voting “yes” – and 151 voting “no.”  And we saw it a few weeks after that, when a $50.5 billion Sandy aid package cleared the chamber with only 49 Republicans supporting it, and 179 opposing it.

The common thread in all of these instances is that true-believer conservatives imposed politically toxic positions on the GOP conference and Boehner had embarrassingly little ability to put a stop to the madness. It was only when the power of public outrage, poll numbers and pressure from members in marginal districts grew just strong enough that Boehner had the ability to allow floor votes and resolve the issues without losing his speakership to a coup of angry conservatives.

Really, this has been the story of Boehner’s entire tenure as speaker. In the 112thCongress, Boehner famously negotiated to the brink of a deficit reduction “grand bargain” with President Obama, one that would have exchanged modest revenue increases for serious cuts to safety net programs. But even that was giving away too much in the eyes of the Tea Party crowd, forcing Boehner to walk away from the table. Back then, Boehner could mostly settle for not striking deals with the administration and leaving most issues to fester. In the minds of most Republicans, the lousy economy would knock Obama out of office in 2012 and deliver the Senate to the GOP too, empowering the party to impose a true-believer agenda in 2013.

But then Obama won a resounding reelection victory, Democrats added to their Senate majority, and the GOP lost seats in the House. This has created a new dynamic in the 113thCongress, with an emboldened second-term president more confidently pushing his agenda and ratcheting up public pressure on Republicans to meet him halfway.  It’s also helped that Obama has had public opinion on his side, and that in the case of the fiscal cliff, Republicans were facing the prospect of being blamed for automatic across-the-board tax hikes if they failed to compromise. So in this Congress, unlike the last one, there is serious pressure on Boehner, for the overall good of his party, to make some deals.

But he’s hamstrung by the fact that what’s good for the GOP’s overall image isn’t necessarily good politics for individual Republican members. Many of them represent deeply Republican districts, where there’s no such thing as a serious general election challenge. That moves all of the action to the GOP primary, which has two effects: 1) It increases the likelihood that a Tea Party-type will win the seat; 2) it forces Republicans who aren’t truly Tea Party-types to behave like Tea Party-types so that they can win primaries. This pressure exists in non-safe districts too, but there’s a little more tension for these Republican members, who have to worry about potential primary challenges along with the general election. And then there’s Boehner, who is deeply distrusted by the conservative movement, thus forcing him to consider the possibility of a revolt by restive conservatives before making any major decisions.

Thus, the only real option for Boehner is what we keep seeing this year. When there’s a major piece of legislation where public opinion is on the Democrats’ side, Boehner has to wait until enough pressure and outrage has built that a healthy number of Republicans from marginal districts who value their seats and Republicans from safe districts who value having the majority decide it’s in their interests to resolve the issue. Only then can Boehner move the bill to the floor. And even then, the majority of Republicans will feel compelled – either by their genuine ideological views or by fear of a primary challenge – to vote against it.

Which brings us to the sequester that’s now kicking in. This is hardly a surprising development. Obama has made his negotiating position clear: He wants to get rid of it and enact a “balanced” fix that includes entitlement cuts and increased revenue from tax deductions and loopholes. There is absolutely no way that Boehner could sell anything along these lines to his conference right now. Conservatives in the House and across the country are still smarting from the fiscal cliff deal, so anything involving more revenue – even if it’s not actually from tax rate increases – is a non-starter. For now.

But what happens as the sequester is implemented and Americans begin to see the impact? And as the defense industry, which still has real clout within the GOP, even if it’s not nearly as much as it once did, begins to feel the impact? And what happens as the prospect of an ever worse situation – a government shutdown triggered by the March 27 expiration of the continuing resolution that now funds the government – approaches? What if polls show voters breaking hard against the GOP?

That’s the kind of political toxicity that Boehner needs to sell any kind of a deal to his fellow Republicans – one that would give some ground on revenue, incur the wrath of the right, pass mainly with Democratic votes and (ideally for Boehner) allow the speaker to hold onto his title. In fact, as best anyone can tell, this basically is Boehner’s strategy right now. As Politico reported earlier this week, he seems to be “aiming for a hefty dose of spending cuts and reforms like a change to calculating government benefits called chained CPI and closing a few tax loopholes.”

Chained CPI or some other serious cut to the safety net could prompt anger on the left that could complicate the new Boehner strategy of passing big bills with Democratic support. But that’s not his worry right now. For whatever reason, he likes being speaker, even though he’s an unusually powerless one, and he wants to keep the job. So he’ll take the sequester and wait.