I'm not here to make friends

At my "Survivor" audition, alliances were formed. Hearts were broken. But would I make the cut? 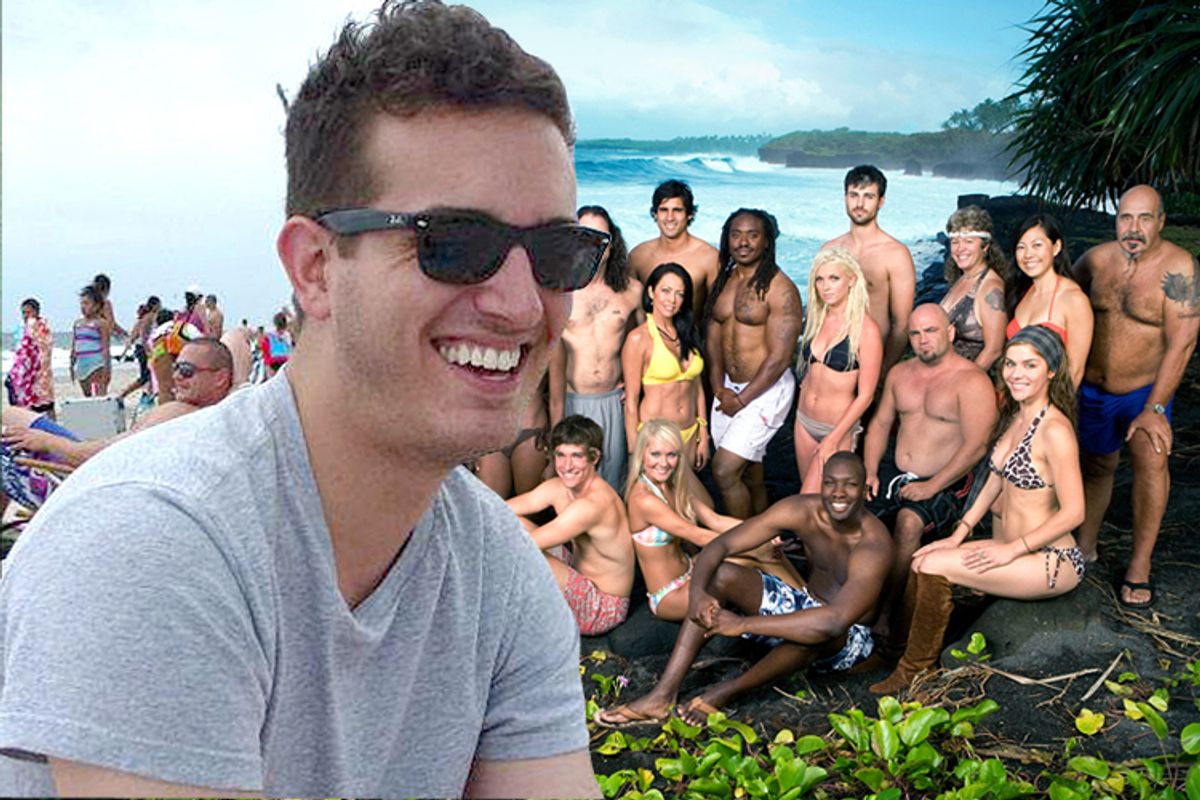 A photo of the author with the cast of "Survivor"
--

I formed my first alliance with Desiree. She was a 40-ish Piloxing (Pilates plus boxing, she explained) instructor, in much silver butterfly jewelry and a Polartek fleece. I was a recent college graduate feeling antsy about my future. I had all the clichéd ideas about “moving to Austin.” But some days I just wanted to talk into a camera on a beach, and make enough money that I wouldn’t have to work for at least a few months.

Desiree and I didn’t have much in common. I tried to engage her in conversation, but her attention retreated whenever I strayed from her preferred subjects, like Piloxing. But one thing upon which we agreed was that when the game started, we'd be allies. "Because we'll both get on, right?" I joked.

"The energy in this part of the line is very cosmic," she said.

“Survivor” has been around for so long that mentioning it among the reality shows that are, after decades, still degrading our standards for entertainment almost seems redundant. And yet the show, now airing its 26th season in 13 years, still has its core audience – a group of 8 to 10 million people who tune in season after season. Inside that number is a smaller subset who dream of getting cast and starving on a beach somewhere in Southeast Asia or Latin America for seven to eight weeks.

I am among them.

Last year, when the show was entering its 24th season, there were two open calls listed on the CBS site: one in Normal, Ill., and one in Atlantic City, so I went for the first time in my life to Atlantic City. After a bus to Philadelphia and a train to Atlantic City, I got to the noon open call at a casino at 10:30. There I found a roomful of about 50 people, many of whom were folding up sleeping bags. I figured this represented the show's core constituency after more than a decade on the air, and was relieved I wouldn't have to wait long. Maybe I could play craps afterward! I took my place behind the 50th or so person, and this individual promptly told me, "The line goes outside."

"You know now," they replied.

The game had begun!

Outside, down the Atlantic City boardwalk, the line extended into infinity. The first person waiting outside was in a black fedora, black duster and tufty brown goatee. Later, people in line would comment he'd been to "American Idol" auditions. "He just wants to be on TV" was the general, scornful consensus radiating off those around him.

I made my way past a crowd whose median age was 45 and whose mode of garment was a Philadelphia Eagles jersey. About 600 people down, I found my spot -- by this point, the line had curved into an alley leading to a parking lot. The people in front of me were a mother who looked like a Talbots model, accompanied with her daughter and her daughter's best friend. The girls, about 19, were extremely sporty and seemed as confused by my outfit (a denim short-sleeved American Apparel button-down, red khaki shorts and no jacket – I wanted to convey that I was “woodsy” but “hip”) as I was by theirs (souvenir tees from soccer tournaments).

I met Desiree when she began the slow and deliberate process of cutting me in line, which she finally managed around the hour mark. I let her have the win; her butterfly necklace was her immunity idol.

There were three cousins from Staten Island behind us. One of them, very short, talked at length about how he was "going for that Jersey Shore shit." An Asian dealer exited a side door of the casino -- this was around 12:30, and we were out of the alley, inching along the peeling Trump Taj Mahal wall. "Yo, dude, you should be on Survivor!" said the short one.

"You eaten cat. You eaten dog. Shit, you can survive on the island!" said the short fellow to his friends.

The mother, who had taken off her Aerosoles, inched forward slowly. She dispatched her daughter to gather shells from the beach to make an "Immunity Necklace" to stick out in the auditions. The string would be Twizzlers, among the many foodstuffs the mother had brought in her bag. I was hankering after her animal crackers, but under the impression that the CBS employees walking the length of the line were checking out our camera-readiness, I wanted to seem rugged and survivalist. This is why I was shivering while those smart enough to actually survive huddled in their coats. Even the Staten Island boys, all of whom bought cheesesteaks, agreed with me that the people renting rickshaws to stay out of the wind in line were too weak for island life, though Desiree thought it was a ballsy strategy.

A contestant from the first season walked down the line. Desiree said she didn't respect him because he was very lazy in his first season. "You have to contribute to camp life," she said. One of the Staten Island kids asked him how to get on the show. "Just be yourself, man!" the contestant said. After he left, the Staten Island kids and I agreed he probably didn't know how to get on the show; that was 2000 when he was on, anyhow.

We very slowly arrived at the front of the casino. There was a large banner with a “Survivor” logo on it, and the older and more excitable applicants took group photos in front of it. These were the folks who were generally wearing the "buff" bandannas you buy from CBS.com; they're different colors every season.

"None of you are going to make it!" said the tallest of the Staten Island boys. The medium-height one got kind of embarrassed and talked to Desiree about how weight loss and body sculpting is contingent on diet.

We inched forward. The Staten Island boys stepped out of line to smoke, so now I was immediately in front of a married couple from Princeton Junction. They were both very fit and had been watching the current season on an iPad. I asked them if they'd be mad if their spouse got on instead of them. The husband said the show was really his wife's thing. The wife smiled in a steely fashion. Desiree told me she was angry at the Staten Island boys for making fun of the older contestants, but she was "saving it all for the confessional on the island."

It got windier in the immediate entryway to the casino. I eyed my sweat shirt, safely packed away, and my goosebumpy arms, and then the CBS employee approaching. I stayed ungarbed. I noncommittally asked the CBS employee, like, what it would be like. He was red of face and started shouting at me that that tone of voice would never get me to Samoa, or wherever, and said I needed to say: " I'M GOOD AS SHIT WITH TOOLS, AWWW, MAN!"

I entered the casino with Desiree still ahead of me. "I love our alliance," she said. Jokingly, I replied, "I'm not here to make friends. I'm here to win,” a famous line from just about every reality show in existence.

"Knock me over with a feather," she said to the married couple, who maybe got my joke, maybe didn't, but were not here to make waves. "I cannot believe you said that. I just ... I am not going to start a fight with you, OK? I'm just not."

I walked up to the sign-in table. It was when the second pen ran out of ink that I realized my hand was very shaky. Like, I wanted to do this for reasons other than ennui. I got a number and had to hold it under my face while I said my name and age and city, which was obviously "Brooklyn" not "New York" ("2 Broke Girls" was, then, a hit, and the first wave of “Girls” press was breaking.)

I was asked two questions in about 25 seconds. The first was the reason I wanted to go on “Survivor.” Unsure anymore why – these people seemed to fulfill Sartre’s idea of hell and I couldn’t imagine sitting in the rain with them for more than the three hours that had already elapsed – I decided to go deeper into character. “You know, I’m young and some people say I’m hip,” I lied, “and I want to find out if I’d get along with people from the middle of the country. I’m not sure I would, but it’ll be so interesting!”

It didn’t work – I never got a callback. And these days, “Survivor” contestants are more often either recycled from past seasons or drawn from professional sports and the world of beauty pageants. There were few spots available, though I’m hoping I’ll see Desirée on-air. She wanted it bad.

As for my choking on my words and my lack of meaningful preparation and my out-of-place outfit and my ability to destroy an alliance through presumption and ironic references, I realized that had I somehow been cast, I’d have been out first. The trip back to Brooklyn was long, but the bus was warm and I got a big sandwich near the bus station in Philadelphia, knowing no one would be watching me.