I have waxed and bleached and scorched myself with goo. If I can't get rid of my facial hair -- can I accept it? 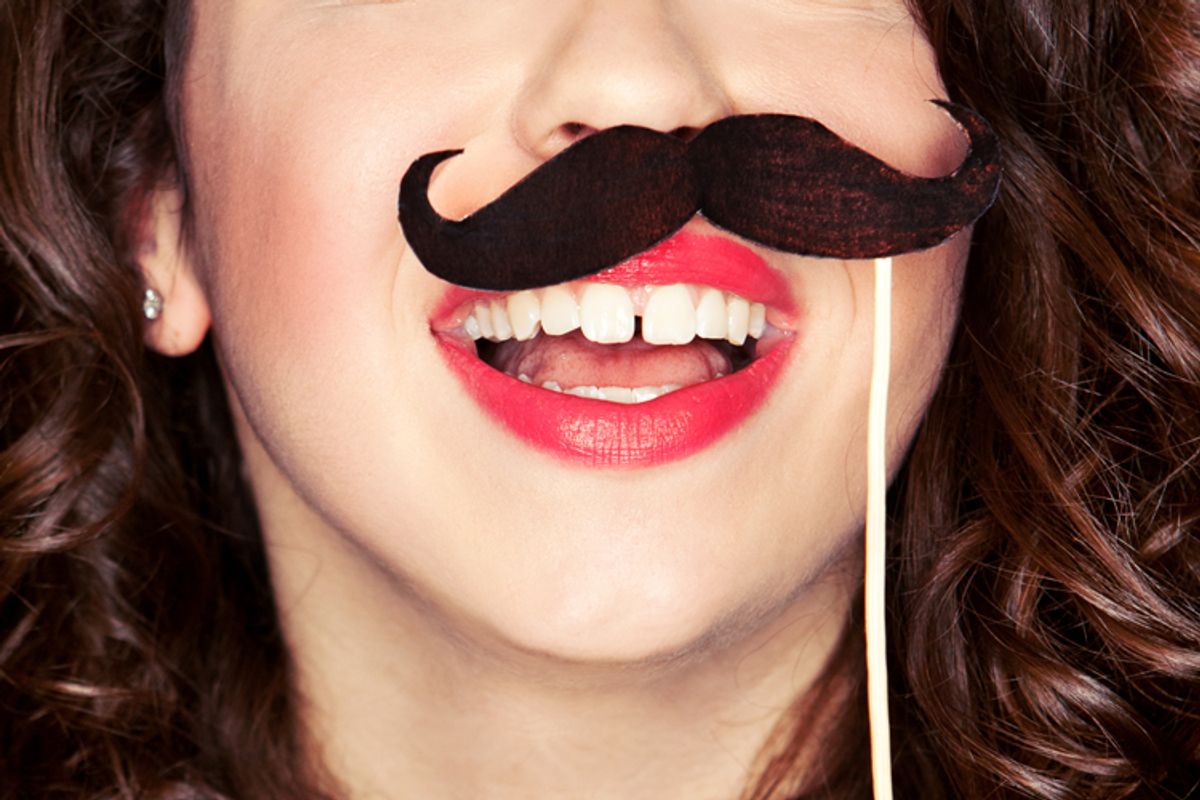 One morning last December, I called into work and said I “needed to work from home” because I thought I was “coming down with something.” This was not exactly true. The real problem was that I had woken up with a huge red welt spreading across the middle of my face and simply could not muster up the emotional resources needed to appear with it in public. I didn’t want anyone thinking anything was wrong with me, but I also didn’t want anyone knowing the ridiculous truth: The night before, I had fully scorched myself while attempting to chemically remove the mustache that has been trying to take up permanent residence on my upper lip since I hit puberty.

This is all my mother’s fault. She comes from a long line of dark, wiry-haired people and suffers from the same furry burden — although, now that I think about it, my father could also be to blame. He’s had some form of facial hair since the early 70s; he’s been married to my mom for more than three decades now, and there are whole swaths of his face she’s never seen. Maybe after a while that shit just morphs your DNA. Maybe I was doomed from the start. Who knows what kind of sumptuous beards the world could’ve been blessed with had my parents produced a son. But they didn’t. And so here here I am, a lady with a mustache.

Like my over-reliance on fossil fuels and the knowledge of my own inevitable death, my mustache is a source of constant, low-grade anxiety. Sometimes I look in the mirror and my mustache is all I can see. For the sake of context, I should say that I have a less contentious relationship with the rest of my body hair: I only half-assedly shave my legs and armpits; after years of tweezing, my eyebrows mostly seem to have gotten the hint; I go to the salon only when I look in the mirror and see not my own reflection but James Taylor on the cover of "Sweet Baby James." I actually feel pretty great about the rest of my body — probably because I’ve subconsciously transferred the weight of all possible insecurities onto my mid-face region.

I don’t love how the thing looks — in full bloom, it reminds me of the facial hair favored by all the older boys who rode my bus in ninth grade, guys who wished they could be rolling up to school in some sick El Camino but couldn’t get enough shifts at Movie Gallery to swing the insurance. But even more than my own aesthetic concerns, I fret about the social stigma. I worry about whether anyone has noticed that I have a mustache — and then, after I’ve gotten rid of it, I worry about whether anyone has noticed that I suddenly don’t have a mustache.

On bad days, the simple fact that someone is looking in the general direction of my face is proof enough that they’ve espied my mustache and are sitting in silent judgement of my attractiveness or my hygiene or my general worth as a person. At these times, I remind myself that looking at someone’s face is a fundamental part of interpersonal communication and not indicative of anything other than the fact that I am conversing with a well-socialized human being.

This anxiety persists despite the fact that no one (aside from my mother, who I figure is entitled to it) has ever said anything to me about my mustache. No adults, at least. Children, on the other hand, just love to point out a ladystache. Especially little girls. When I was 19, I worked as a counselor at the Girl Scouts camp I’d gone to as a kid. One day a camper approached me, stood at my feet and just stared up at me, seemingly enraptured, just as I had been by my own counselors when I was 11. She smiled up at me, and I smiled down at her, and then she smiled wider said, “You have a mustache.” And not in a friendly way, like a friend tipping you off about lettuce in your teeth. It was like she knew that I knew I had a mustache, but she just wanted me to know that she knew, too. Her voice dripped with all the sniveling sanctimony of a child on the near side of puberty. I had been living in the woods for a month at that point so it’s possible that I forgot my manners, but if there is a God, that little girl is only just now emerging from the gnarliest, greasiest adolescence I could bring myself to pray for.

Speaking of prayer! Petitioning all the major deities is just one of the many objectively insane ways I have attempted to rid myself of this mustache. For a while I went to a woman named Miss Amy who did waxing in the back of her nail salon and who never spoke to me directly except to say “come here” and “lie down” and would then laugh quietly to herself while she administered her services. It took me a while to realize that it actually was pretty hilarious how she was charging me $20 to smear hot wax on my face and rip out hairs that seemed to sprout back immediately upon exposure to sunlight. After that, I got more into the DIY approach. Over the years, I’ve become a beleaguered connoisseur of painful and ultimately ineffective at-home hair-removal methods: Nair, razors, tweezers, very carefully wielded scissors, prepackaged wax strips warmed up with a hair dryer. Then there’s this stuff that’s a powder and a paste you have to mix together with a tiny spatula on a tiny mortarboard into a slightly thicker paste, though that doesn’t remove the hair, just “lightens” it, which means instead of a dark mustache I get a blonde one.

The stuff that scorched me into calling out sick was a white goo that came in a little jar with a brush attached to the lid, like rubber cement. I either left it on for too long or slathered on too much. I’m not sure what went wrong, but that night I hit my breaking point. Since then I’ve felt my mustache anxiety morphing into something more like mustache rage. I know there are worse things that could happen to a person — the brain cancer I’ll likely develop from all these hair bleach fumes will probably put this all in perspective. But for now, there’s anger and shame aplenty, and this truth that I’m only just now allowing myself to articulate: Being a lady with facial hair is just so deeply infuriating.

When it comes to my mustache, I know what I’m worried about, but I also don’t have any idea what I’m worried about. It’s hardly as if this thing has crippled me, professionally or socially or romantically. I’m married, for one, to a wonderful man who doesn’t seem to mind that he will have to deal with me and my facial hair until it and I are old and gray. And my female friends are somehow almost all brunettes and I think they all know how I feel, even though we’ve never discussed this openly before.

So maybe that’s the real problem: We’re all bleaching and ripping and scorching ourselves in private and never speaking a word of it. Perhaps we need a new vocabulary, some gentle way to telegraph recognition of most-likely-unwanted facial hair between friends, just like we have “barn door’s open” (for unzipped flies) or “bat in the cave” (for boogers hanging out of noses) and the less known but still effective “booger in the cave” (for bats hanging out of noses). Like “Burt Reynolds alert” maybe? Or “yo, Hitler” if you’re feeling crass? The word itself hardly matters, though; what’s important, I think, is to sweep aside this veil of silence, this tapestry we’ve woven from all of our unacknowledged facial hair.

When I told one friend that I was writing this piece, that I had this mustache and all this anxiety about it, she just squinted at me and said, “Honestly, I’ve never even noticed it before,” then launched into a tale about her own adolescent adventures in electrolysis. My heart grew three sizes that day. My mustache probably did too, what with the increased blood flow. But it was totally worth it, just to feel less alone.