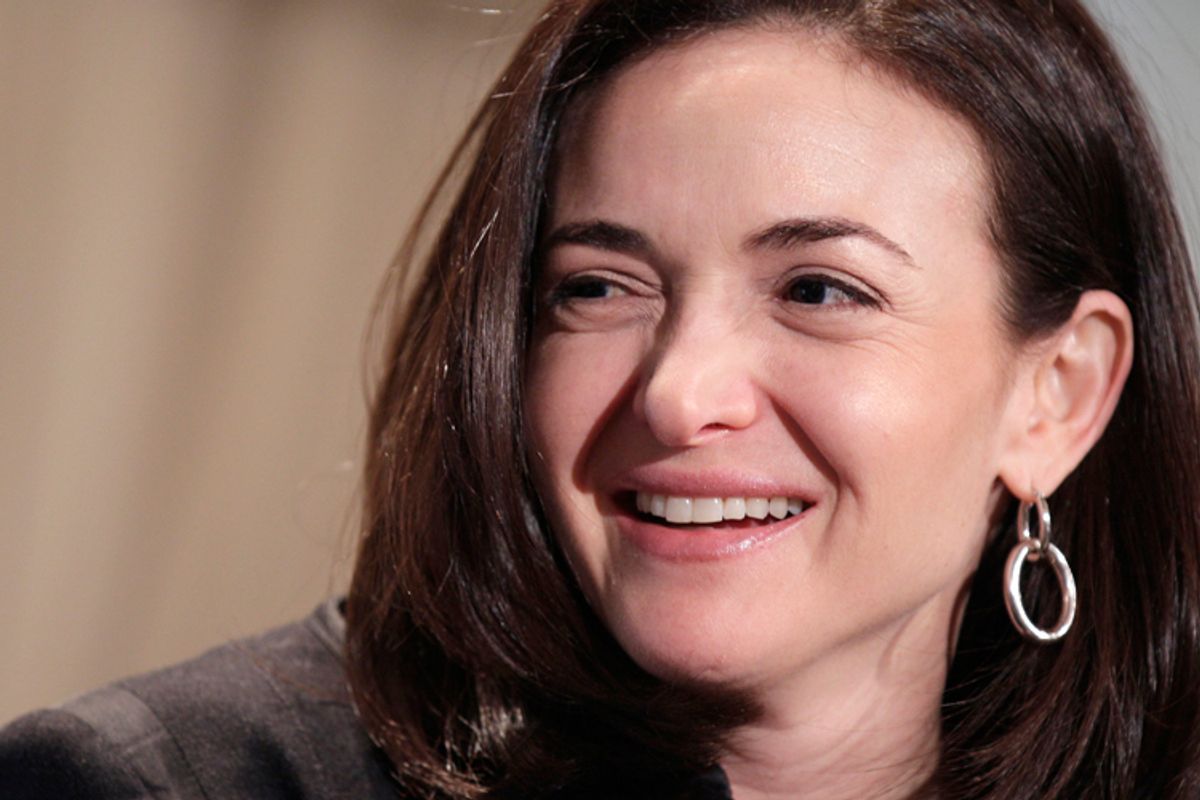 That Sheryl Sandberg is one crafty lady. The shockingly negative early reaction to her book “Lean In: Women, Work and the Will to Lead” only proves one of its central points: Boy, do we hate uppity women! Well played, Madam!

Except the famous Facebook COO is the opposite of uppity, personality-wise (look away from her wealth and privilege for just a moment, if you can. It’s hard, but try.) In fact, the only thing I didn’t like about “Lean In” is the way she constantly reassured us that she knows our objections to her argument, and they bother her. If you took out her caveats and provisos -- that she respects stay-at-home mothers and knows she writes from the pinnacle of privilege and is aware her advice might not help a single mother in a minimum wage job and understands that many women don’t aspire to climb the corporate ladder and she doesn’t judge anyone, except probably Hitler -- the book would be at least a quarter shorter, and a better read.

Sandberg needs someone to write a book that says: No matter how you layer in apologies for not writing an entirely different book, a book that will help every single person on the planet, people will savage you for it, anyway. Maybe she’ll do that next.

Sadly, despite her pleasant, sometimes placating tone, Sandberg has unleashed the anger, resentment and envy she tried so hard to duck – and the book isn’t even out until March 12. Michelle Goldberg does a great job cataloguing the Sandberg backlash here, and Jessica Valenti does it here, and Jill Filipovic here. I’ll send you to Goldberg and Valenti and Filipovic, not the haters; you can follow up from there. Maybe most amazingly, she is being pilloried for a book many of her critics admit they haven't read -- I can't see so many people doing that to a man, I really can't -- and for a seemingly self-congratulatory quote that the New York Times took wildly out of context. The paper quickly issued a correction, but it was too late. Sandberg is now the Chief Narcissism Officer for the League of Extraordinary Elitist Women.

I’m stunned by the venom directed at a powerful woman who declares herself a feminist when so many of her peers don’t dare to, and who writes a book to try to help other women identify the social, political and, yes, psychological factors that keep them down. You don’t have to like the book, but I don’t get the hate.

Of course, I write from the perspective of an upper middle class white woman who’s spent most of my career (when I wasn’t working for myself) in management, so my perspective is limited, too. But Sandberg’s description of the way even ambitious women thwart themselves rings disturbingly true to me, and her candor is bracing.

I was handed a perfect case study of gender and wages in one of my early management jobs. I supervised four people, two men and two women, all talented 20-somethings, and when I came into the position, I found that the men made about 20 percent more than the women. When I consulted the people who hired them, I was told that the men asked for more money than the women. I couldn't be insinuating that anyone was sexist, could I?

Since then, I’ve hired many dozens of people. And virtually every man I hired asked for more money than we offered; virtually no women did (I can think of only one). Men also asked for raises far more often. An ambitious young feminist writer shocked me by asking for a third less than her male peers made  – and I told her. She asked for more on the spot and I gave it to her, and I know she’s passed the advice along.

So if the only thing anyone gets from Sandberg’s book is that women need to ask for more money when they’re hired, and ask for raises along the way, it would help a hell of a lot of women – and not just those at the pinnacle of corporate America. It wouldn’t close the wage gap between men and women, but it would narrow it. Of course there are many women – and men – who lack the power to ask for more money. Poor, undocumented, desperate, a paycheck away from homelessness, they’re forced to take whatever they’re offered, and we should all work for a world in which that’s no longer so common. But in the meantime, should women work for less money than men because of that? People are starving right this minute: should those of us who care about the issue of hunger give up eating?

Anyone who says Sandberg ignores the social barriers to women’s advancement either hasn’t read the book – hello, Michael Kazin, I love your work, except for this piece -- or is flat-out lying. She devotes page after page to discrimination and pay inequity and antiquated public policy that leads not only to lower wages, but to women holding just 14 percent of executive officer positions, 16 percent of corporate board seats, and only 18 percent of Congress. She brings reams of research showing how men – and women – underestimate women’s capacities, silence their voices and judge the ones who become successful far more harshly than they do successful men. In one well-known study, participants are presented with the story of a hard-charging venture capitalist, but in one group, he’s named Howard and in the other Heidi. The results are the same among women as men: Howard is admired, Heidi is a bitch.

Forget about Howard and Heidi: Steven Sandberg would never face this kind of rage for writing a how-to-get-ahead book.

For all her apologies, Sandberg is clear that while she’s paying attention to social and political barriers, she’s focused on what women can do to advance themselves. And she gives lots of examples, in addition to the way women fail to ask for more money. Men apply for jobs when they meet roughly 60 percent of the stated requirements; women when they meet 100 percent of them. Men volunteer for new positions and promotions, women wait to be asked.  In business meetings, women routinely take seats away from the meeting leader, or at chairs to the side, or in the back. She tells them to lean in, literally and figuratively. She even gives advice about asking for a raise, advice that made me cringe, because it involved saying “we” and not “I” – men don’t have to do that – and being pleasant and unthreatening. Sandberg seemed to cringe at it too, but she’s trying to change the world while nonetheless starting where she finds it.

If my generation felt like we didn’t get enough warning about how hard it would be to balance work and family, Sandberg argues that this generation of young women may have been warned too much. She meets young women who confide they’re taking jobs with less travel and fewer demands before they even have a partner, let alone children, and she gives the simple advice “don’t leave before you leave” – meaning don’t put yourself on a less-demanding mommy track before you’re even a mommy.

She doesn’t let men off the hook, either, even at home, arguing that the single most important career choice a woman makes (if she marries) is her choice of a spouse. He’s got to be someone who believes in being a full partner in family life – which means putting in the time packing lunches and changing diapers, not just being a jolly paterfamilias proud of his superhero wife who works double time managing a career and a household.

So let’s see: Reforming laws and public policy? Check. Changing attitudes and ending stereotyping? Check. Getting men to do more at home to support their partners and at work to support female employees? Check. Suggesting there are measures women can take, along with pushing for change, to improve their own odds of success? That’s there too – but I don’t get where the hate comes from.

There’s a manic cruelty to some of the criticism – pretty much all of it coming from women, by the way – that feels like misogyny. I hate that cliché about the members of traditionally oppressed groups as crabs in a barrel, but it kept coming back to me. Yes, her book has the most relevance to women near the top of the world of work. Yet we know that poor girls, black girls, and immigrant Dream girls will find themselves in the workplace, and some will even reach the ranks of middle and upper management -- shouldn’t they know these things Sandberg has learned, too? Or maybe she should have saved these secrets for her daughter, to make sure the rich get richer?

I’m glad she didn’t. I pre-ordered "Lean In" for my daughter.