My sober conversion to atheism

Four years ago, I scaled a Pacific Northwest peak and felt the spiritual wind of no-God. I've been sober since 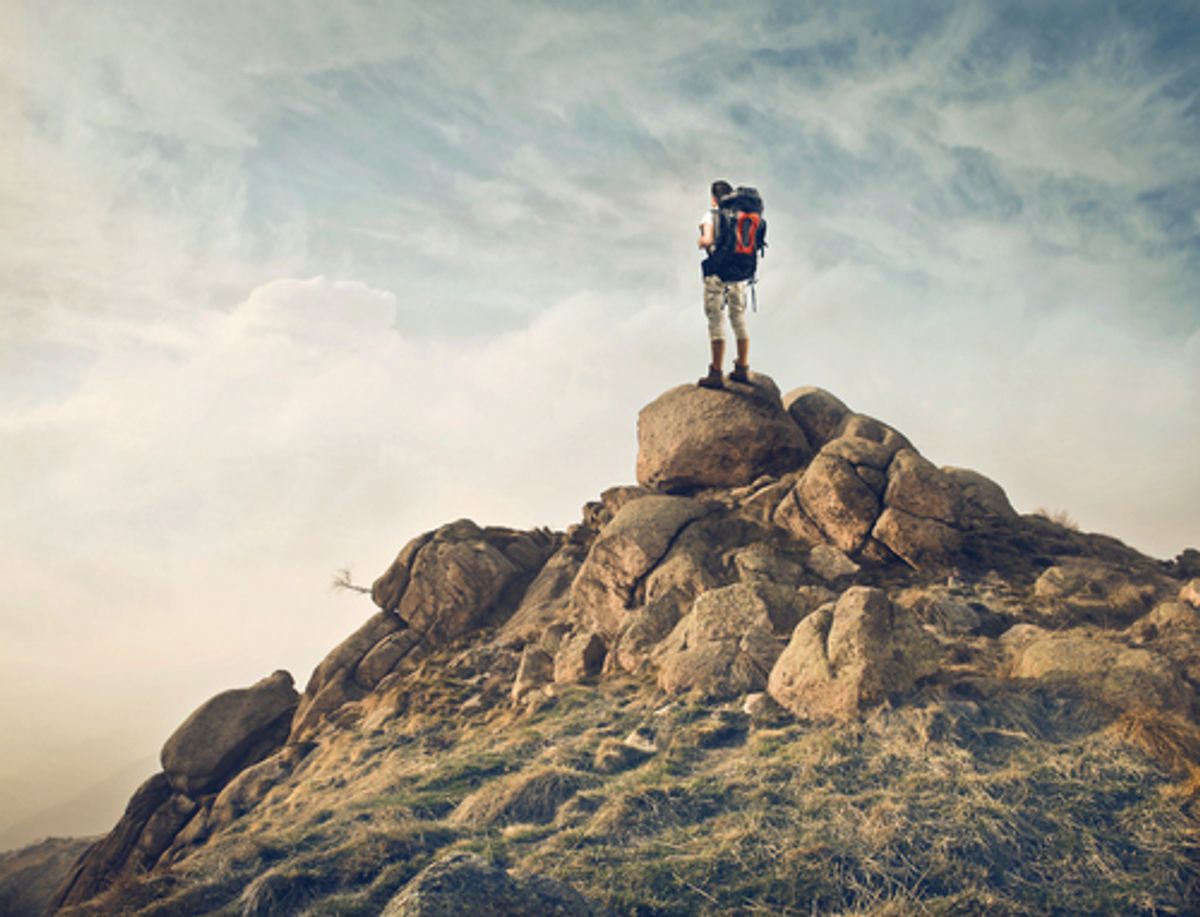 I stood on a mountaintop and looked out over the sea. A thousand feet below me, eagles soared on thermals. Wind blew through my hair and I felt dizzy. I fell to my knees and cried. I didn't realize it at the time, but this “white-light” experience was the moment I realized there was no God — I had been struck atheist.

To be accurate and appropriately less dramatic, my atheist conversion was far from immediate. It was a process that began when I got sober about five years earlier.

I finally stopped drinking and drugging at age 30, in the summer of 2004, after about 15 years of relatively high-functioning abuse. I took to 12-step recovery like a fish to water and was especially drawn to Alcoholics Anonymous’ message of a spiritual solution.

I was perfectly comfortable with spirituality. I had been exposed from an early age to a hodge-podge of spiritual ideas by Goldwater Republican parents who had baptized me Episcopalian but referenced Joseph Campbell and the Buddha in casual conversation and sent me to an astrologer in lieu of a child psychologist.

Not that I had an entirely rosy view of religion — far from it. I was raised in the Bible Belt and had plenty of run-ins with all manner of unpleasant kooks throughout my life. My parents also saw fit to send me to a Catholic school for my primary education, where I experienced first-hand how religion could be used to repress individuality and creativity, and it filled me with loathing and terror. At least I can times stuff and write good in cursive.

But instead of turning me off entirely to religion, these negative experiences instilled in me the idea that there was a right way and wrong way to do spirituality. And that was an idea I was willing to go to the mat for.

In my drinking days, I was known to get in passionate religious conversations with anyone unlucky enough to sit next to me at the bar, beseeching “GOD IS LOVE!” through a haze of whiskey and cheap cocaine as my quarry gingerly backed away.

By the time I’d reached my bottom in the winter of 2003–2004, I’d become intrigued by the Christian writings of C.S. Lewis and would often put myself to sleep reading "The Screwtape Letters" or "Mere Christianity" with one eye closed to correct for double vision. I listened to Louvin Brothers songs of loss and redemption late at night and felt a hair’s breadth away from divine intervention.

I made it to my first AA meetings in the spring of 2004, and at that point I had no problem whatsoever reading the word “God” in the literature. I remember thinking I understood my relationship with God so well that I didn’t need a second or third step. I pitied people who had problems with “the God thing.” Not that I couldn’t relate to their disdain for religion in general — but, I thought, “Can’t they just get over it?” The goalposts seemed so wide!

After a couple years in AA, a man who is a well-known Buddhist teacher became my sponsor. He spoke of a faith in AA born of experience as opposed to the blind faith demanded in most religions. As he explained it, first we hear the experience of those who got sober before us, and then, through our own practice, we develop a faith in the fellowship, the steps and ultimately ourselves. He encouraged investigation. He taught me the healing power of the 11th Step and told me that when I prayed it wasn’t important that God hear my prayers, so long as I did. These ideas felt powerful and practical and attractive, and they heavily inform my thinking about recovery and spirituality to this day.

Still, I held onto the idea of some divine force. Concepts like universal intelligence, pantheism and synchronicity still held weight with me. I believed in — or wanted to — a creator or universe that was actively looking out for me.

Meanwhile I was doing the 12 Steps, which are often described as a way to find God. But my experience with the steps was more mechanical than magical. The process of inventory, amends, meditation and service simply gave me insight and a sense of purpose and connectedness and helped quiet my self-obsession. Neat stuff, but hardly divine intervention.

So, I was lead to the mountaintop — a real one, on a map: Constitution Mountain, the highest point on Puget Sound’s Orcas Island. It was the last day of a three-week solo road trip up the West Coast. The trip itself felt blessed. Beauty, adventure — I saw old friends and new sights and even managed to sow the seeds of a profound romance.

I decided to spend the last day seeking solitude in the San Juan Islands. But instead, I found loneliness. A sense of despair set in as the fraudulence of my existence stared me in the face. Ah, Mother Nature … I trudged, directionless, through dense woods up a steep path. I wanted to turn around and go home. I kept going.

Two hours in, I was exhausted and hungry, like a Manson Family member primed for a brush with the psychedelic. I turned one last bend and the trees broke. I stood on a sheer cliff, stunned, looking out over the Sound into Canada. In an instant, my self-obsession washed away. I felt connected to everything I saw: the water, the trees, the eagles, the clouds. I felt our shared atoms and immortal energy flowing in time and space. My eyes filled with tears and my legs collapsed from under me. I understood that there was nothing greater — nor did I need anything greater — than this moment. And though I may not have had the words to describe it then, I see now that that was the moment in which any vestiges of a supernatural god, for me, died off. Double-rainbow all the way, man.

Nearly four years have passed. Since then, I relocated to Portland, Oregon, for three years and then came back to New York. My time in Portland was humbling, as being The New Guy often is. But beyond unfamiliar surroundings, I just wasn’t picking up what they were laying down in terms of AA. Don’t get me wrong — Portland is doing fine without me, blessed with a large and vital AA community, but it really can feel a little like a "Portlandia" sketch.

Portland’s famous DIY locavore ethos is both its greatest asset and biggest liability. Its militant inclusiveness seems to inadvertently create an atmosphere where you’re either with us or against us. People were happy to tell me I was being “too smart for AA” for trying to invent my own program. Another one I got was the old-timer who “used to feel like you do,” insinuating that I would some day find God. This points up the dirty little secret of AA: People say you don’t need to believe in God and point to the Big Book chapter “We Agnostics,” saying, look what a large door we have to pass through!

It doesn’t take much to see that the Big Book writers are speaking of former agnostics. These ideas and interactions left me feeling like a door was being held open for me to leave AA. It was a pretty lonely period.

After some time, I did find a few other like-minded sobers who started a meeting we named “We Agnostics” — in part an ironic nod to the very chapter most of us found so philosophically irksome. The express purpose of the meeting was to share our experience of working the 12 Steps without a supernatural god. We wanted to open the door wider to those who we knew needed recovery but simply couldn’t get past “the God thing.”

The backlash was swift. Mostly, it was behind our backs or in the form of a derisive guffaw when trying to make an announcement to drum up attendance at the meeting. More forthcoming members told me explicitly that what we were doing was simply not AA. (Incidentally, I’ve heard the same critique leveled at meetings that allow discussion of drugs, as well as special-interest meetings catering to queer people and specific genders.) One particularly helpful young upstart with a handful of months sober insisted we were killing newcomers with our message. Drunks do have a flair for the dramatic.

Keep in mind these were not Jesus freaks. Some of them would probably even self-identify as atheists. Their problem seemed to stem from the fact that I was breaking ranks, eschewing tradition and thinking for myself.

I understand the problems associated with a narcissistic alcoholic trying to run the show. It’s a potential path back to the self-obsession that was our problem to begin with. This concept is at the core of AA. But also at the core of AA are what I believe to be many bad ideas. One of the worst is that we must find God or die. I am living proof that this is utterly false.

My current sponsor often reminds me of the difference between an elder statesman and a bleeding deacon, the latter vociferously fighting for what is right while the former quietly lives what is right. We all want to be Yodas, but most of us are just young Sywalkers. I still find it difficult to pass up a good fight. Today, I try simply to walk the walk and be the example of my experience. And when I pray — and I do still pray — I remind myself that if there is no God, I am certainly not him, so let me stop acting like it.