Can dachshunds teach us about international diplomacy? 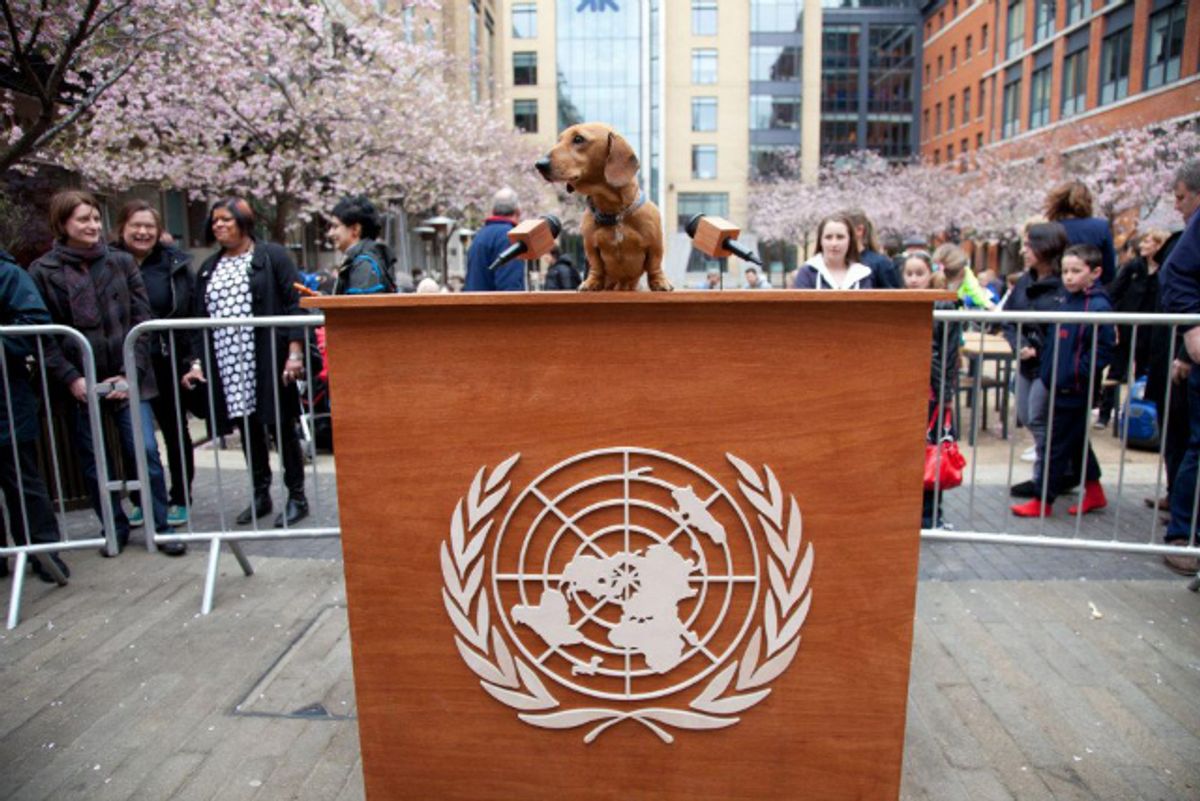 If you can possibly get over the adorable thing that is happening in this photo, let’s think about why exactly a bunch of cute dachshunds acting as 36 dog delegates in a replica United Nations assembly on Human Rights might be successful as a sort of experimental theatre. Australian artist Bennett Miller’s “Dachshund UN“ opened yesterday in Toronto as part of the Harbourfront Centre’s 2013 World Stage performances, with a replica of the forum in Geneva as a stage for the organic chaos of the canine crowd. There is barking and biting and sometimes lunging attempts at small fights (don’t worry, the dogs are leashed and the owners hidden away nearby to keep things from getting too feral).

Miller, who frequently involves animals in his art, such as his multimedia installations on greyhounds and his reconstructions of the modernist monkey enclosures at the Berlin Zoo, has presented “Dachshund UN” elsewhere, but this is its North American debut and the first time for it to be indoors in a theatre. As World Stage artistic director Tina Rasmussen said in a video interview, that move brings the audience to think beyond the sheer spectacle and more about why it is happening, and how it impacts them:

The raison d’être is a serious proposal to the audience, it’s not just a gimmick  [...] it’s really an attempt to propose the idea of chaos and the utopian world, and also the idea of what active viewership means when there is no control over what is necessarily happening on stage [...] how does an audience fill in the blanks as it were.

Perhaps somewhere in watching the dogs for nearly an hour, which allows you to get beyond the complete silliness of it all, some contemplation about the workings of the real UN comes about.

Each of the dogs seated behind its country sign, from France to Argentina to the United States, was cast from an open call for volunteers, although Miller has worked with local dachshund clubs in the past. Miller, in an interview with World Stage, noted that he chose the dachshund for the piece as it has “this restricted form” with its tiny legs, but that they’re “still very proud and determined and quite beautiful animals.” He says that they also have a “racial diversity in the breed” with long and short hair and varying colors that is “similar to humanity.”

The “Dachshund UN” next goes to Montreal, but if you can’t make it up to Canada, he does say that he is looking to do the project a little longer and travel more and expand it, but being in Toronto he’s become “quite keen on raccoons” and is considering a project with them. Hopefully not some sort of UN, as that might get a little rabid even for a government assembly.