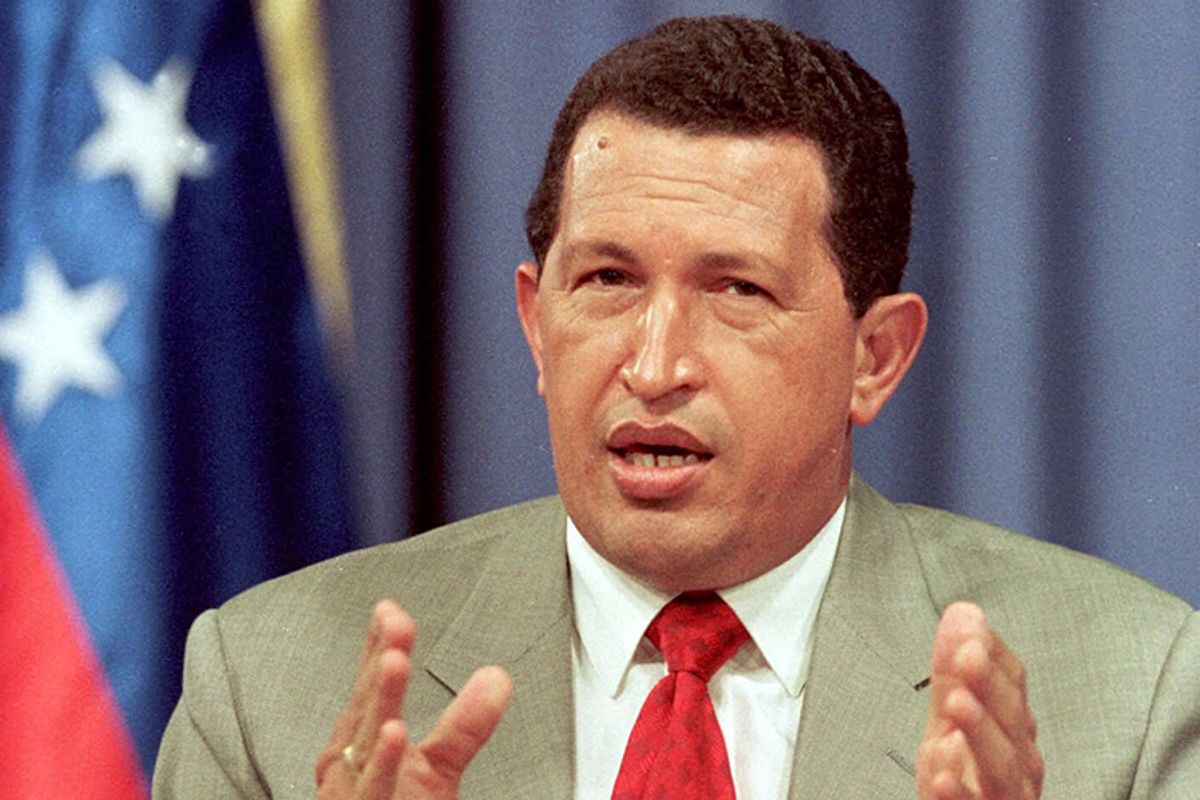 CARACAS, Venezuela (AP) — President Hugo Chavez, the fiery populist who declared a socialist revolution in Venezuela, crusaded against U.S. influence and championed a leftist revival across Latin America, died Tuesday at age 58 after a nearly two-year bout with cancer.

During more than 14 years in office, Chavez routinely challenged the status quo at home and internationally. He polarized Venezuelans with his confrontational and domineering style, yet was also a masterful communicator and strategist who tapped into Venezuelan nationalism to win broad support, particularly among the poor.

Chavez repeatedly proved himself a political survivor. As an army paratroop commander, he led a failed coup in 1992, then was pardoned and elected president in 1998. He survived a coup against his own presidency in 2002 and won re-election two more times.

The burly president electrified crowds with his booming voice, often wearing the bright red of his United Socialist Party of Venezuela or the fatigues and red beret of his army days. Before his struggle with cancer, he appeared on television almost daily, talking for hours at a time and often breaking into song of philosophical discourse.

Chavez used his country's vast oil wealth to launch social programs that include state-run food markets, new public housing, free health clinics and education programs. Poverty declined during Chavez's presidency amid a historic boom in oil earnings, but critics said he failed to use the windfall of hundreds of billions of dollars to develop the country's economy.

Inflation soared and the homicide rate rose to among the highest in the world.

Chavez underwent surgery in Cuba in June 2011 to remove what he said was a baseball-size tumor from his pelvic region, and the cancer returned repeatedly over the next 18 months despite more surgery, chemotherapy and radiation treatments. He kept secret key details of his illness, including the type of cancer and the precise location of the tumors.

"El Comandante," as he was known, stayed in touch with the Venezuelan people during his treatment via Twitter and phone calls broadcast on television, but even those messages dropped off as his health deteriorated.

Two months after his last re-election in October, Chavez returned to Cuba again for cancer surgery, blowing a kiss to his country as he boarded the plane. He was never seen again in public.

After a 10-week absence marked by opposition protests over the lack of information about the president's health and growing unease among the president's "Chavista" supporters, the government released photographs of Chavez on Feb. 15 and three days later announced that the president had returned to Venezuela to be treated at a military hospital in Caracas.

Throughout his presidency, Chavez said he hoped to fulfill Bolivar's unrealized dream of uniting South America.

He was also inspired by Cuban leader Fidel Castro and took on the aging revolutionary's role as Washington's chief antagonist in the Western Hemisphere after Castro relinquished the presidency to his brother Raul in 2006.

Supporters saw Chavez as the latest in a colorful line of revolutionary legends, from Castro to Argentine-born Ernesto "Che" Guevara. Chavez nurtured that cult of personality, and even as he stayed out of sight for long stretches fighting cancer, his out-sized image appeared on buildings and billboard throughout Venezuela. The airwaves boomed with his baritone mantra: "I am a nation." Supporters carried posters and wore masks of his eyes, chanting, "I am Chavez."

Chavez saw himself as a revolutionary and savior of the poor.

"A revolution has arrived here," he declared in a 2009 speech. "No one can stop this revolution."

Chavez's social programs won him enduring support: Poverty rates declined from 50 percent at the beginning of his term in 1999 to 32 percent in the second half of 2011. But he also charmed his audience with sheer charisma and a flair for drama that played well for the cameras.

He ordered the sword of South American independence leader Simon Bolivar removed from Argentina's Central Bank to unsheathe at key moments. On television, he would lambast his opponents as "oligarchs," announce expropriations of companies and lecture Venezuelans about the glories of socialism. His performances included renditions of folk songs and impromptu odes to Chinese revolutionary Mao Zedong and 19th century philosopher Friedrich Nietzsche.

Chavez carried his in-your-face style to the world stage as well. In a 2006 speech to the U.N. General Assembly, he called President George W. Bush the devil, saying the podium reeked of sulfur after Bush's address.

Critics saw Chavez as a typical Latin American caudillo, a strongman who ruled through force of personality and showed disdain for democratic rules. Chavez concentrated power in his hands with allies who dominated the congress and justices who controlled the Supreme Court.

He insisted all the while that Venezuela remained a vibrant democracy and denied trying to restrict free speech. But some opponents faced criminal charges and were driven into exile.

While Chavez trumpeted plans for communes and an egalitarian society, his soaring rhetoric regularly conflicted with reality. Despite government seizures of companies and farmland, the balance between Venezuela's public and private sectors changed little during his presidency.

And even as the poor saw their incomes rise, those gains were blunted while the country's currency weakened amid economic controls.

Nonetheless, Chavez maintained a core of supporters who stayed loyal to their "comandante" until the end.

"Chavez masterfully exploits the disenchantment of people who feel excluded ... and he feeds on controversy whenever he can," Cristina Marcano and Alberto Barrera Tyszka wrote in their book "Hugo Chavez: The Definitive Biography of Venezuela's Controversial President."

Hugo Rafael Chavez Frias was born on July 28, 1954, in the rural town of Sabaneta in Venezuela's western plains. He was the son of schoolteacher parents and the second of six brothers.

Chavez was a fine baseball player and hoped he might one day pitch in the U.S. major leagues. When he joined the military at age 17, he aimed to keep honing his baseball skills in the capital.

But the young soldier immersed himself in the history of Bolivar and other Venezuelan heroes who had overthrown Spanish rule, and his political ideas began to take shape.

Chavez burst into public view in 1992 as a paratroop commander leading a military rebellion that brought tanks to the presidential palace. When the coup collapsed, Chavez was allowed to make a televised statement in which he declared that his movement had failed "for now." The speech, and those two defiant words, launched his career, searing his image into the memory of Venezuelans.

He and other coup prisoners were released in 1994, and President Rafael Caldera dropped the charges against them.

Chavez then organized a new political party and ran for president four years later, vowing to shatter Venezuela's traditional two-party system. At age 44, he became the country's youngest president in four decades of democracy with 56 percent of the vote.

Chavez was re-elected in 2000 in an election called under a new constitution drafted by his allies. His increasingly confrontational style and close ties to Cuba, however, disenchanted many of the middle-class supporters who had voted for him. The next several years saw bold but failed attempts by opponents to dislodge him from power.

In 2002, he survived a short-lived coup, which began after a large anti-Chavez street protest ended in deadly shootings. Dissident military officers detained the president and announced he had resigned. But within two days, he returned to power with the help of military loyalists while his supporters rallied in the streets.

Chavez emerged a stronger president. He defeated a subsequent opposition-led strike that paralyzed the country's oil industry, and he fired thousands of state oil company employees.

The coup also turned Chavez more decidedly against the U.S. government, which had swiftly recognized the provisional leader who had briefly replaced him. He created political and trade alliances that excluded the U.S., and he cozied up to Iran and Syria in large part, it seemed, due to their shared antagonism toward the U.S. government.

Despite the souring relationship, Chavez sold the bulk of Venezuela's oil to the United States.

"I'm still a subversive," Chavez said in a 2007 interview with The Associated Press. "I think the entire world has to be subverted."

His second marriage, to journalist Marisabel Rodriguez, deteriorated in the early years of his presidency, and they divorced in 2004. In addition to their one daughter, Rosines, Chavez had three children from his first marriage, which ended before Chavez ran for office.

Chavez acknowledged after he was diagnosed with cancer that he had been recklessly neglecting his health. He had taken to staying up late and drinking as many as 40 cups of coffee a day. He regularly summoned his Cabinet ministers to the presidential palace late at night.

He often said he believed Venezuela was on its way down a long road toward socialism, and that there was no turning back. After winning re-election in 2012, he vowed to deepen his push to transform Venezuela.

His political movement, however, was mostly a one-man show. Only three days before his final surgery, Chavez named Maduro as his chosen successor.

Now, it will be up to Venezuelans to determine whether the Chavismo movement can survive, and how it will evolve, without the leader who inspired it.