Get ready for bracket wars!

Media March Madness. Behind the scenes with the crazed editors who push every cultural craze into a field of 64 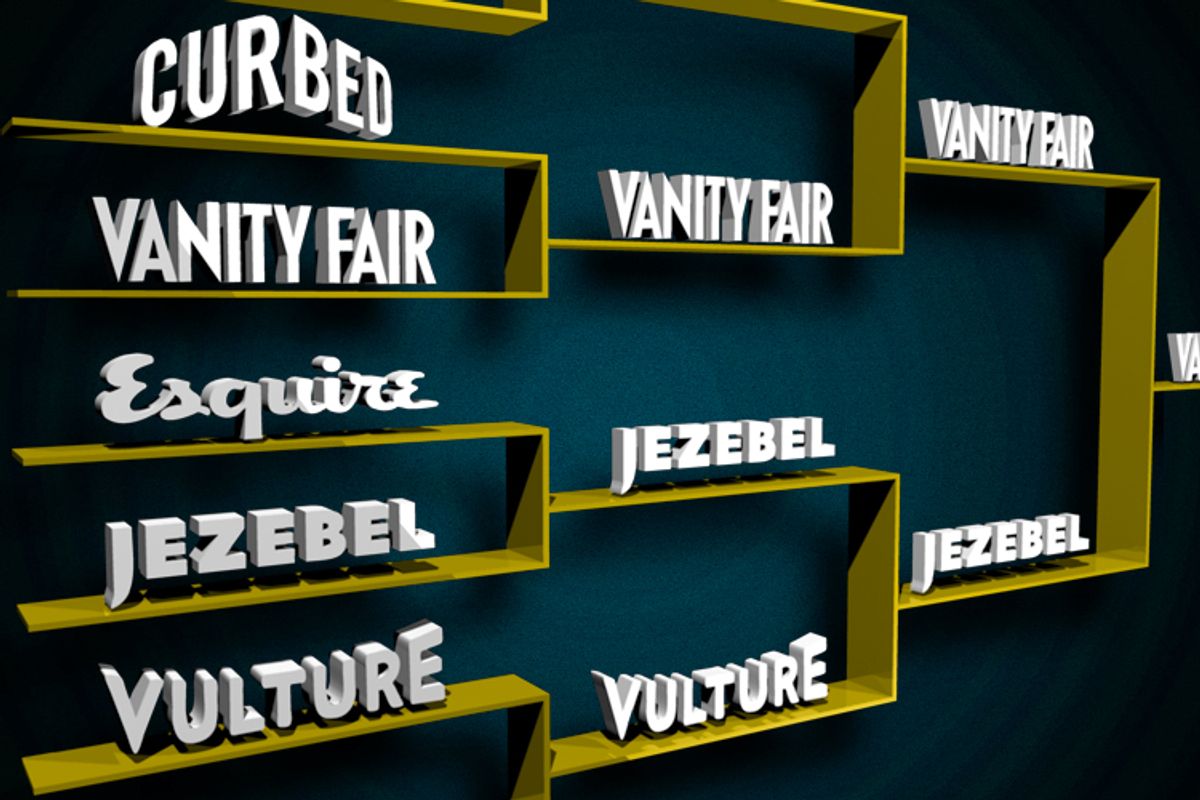 March comes in with 16 or 32 or 64 possible winners, but goes out with just one.

That's because March, trapped in the lull between the Oscars and summer blockbusters, between the end of "Girls" and the start of "Mad Men," has become the month when we collate, rank and quantify -- with brackets.

So later this month President Obama will fill out his NCAA tournament bracket on ESPN, and all the talk will be about bubble teams and buzzer beaters, Cinderellas and which 12-seed will upset a higher-ranked five. But for weeks now, in conference rooms and over cocktails, the media world battles over the newest and smartest pop culture brackets. It's true: I saw the best minds of my generation, destroyed by trying to pick a winner of a third-round best meme battle, between Michelle Obama's mom dancing and Taylor Swift singing with a goat.

This competition is serious. It is not friendly. And like the boom in oral histories of 10-year-old movies and TV shows that lasted from 2010-12, there's something about it that defies explanation.

"To take credit for something momentous feels almost out of place, but I think we were one of the first," said Lockhart Steele, publisher of the real-estate network of sites called Curbed. In 2007, a bracket that attempted to settle the best neighborhood in New York debate sparked controversy when Williamsburg made an early exit from the tournament.)

Jezebel followed, deeply meta, with brackets seeking to find the best cake or pie (winner: cheesecake, by a wide margin, over red velvet cake) and sex position or chocolate dessert (the missionary position enjoyed an even wider margin over brownies). Soon there was a book: Richard Sandomir and Stefan Fatsis' "The Enlightened Bracketologist: The Final Four of Everything."

Sports Illustrated answered with a bracket of brackets, where Esquire's "Sexiest Woman Alive" bracket dueled against Thundertreats.com's "Cougar Madness," and the Score's "Tournament of Bad" squared off against the Good Men Project's "good men sweet 16."

But why brackets? There is, of course, something decisive and pure about watching a field of 16 or 64 mathematically winnow itself down to one. And it opens endless possibilities for the thing people do best online: argue.

There's just something satisfyingly clicky about a bracket, reducing the whole world of pies and "sexy animated characters" (a bracket concept, says Chris Rovzar of Vanity Fair, that came from editor Graydon Carter himself).

"If you do it during March Madness," said Rovzar, editor of Vanityfair.com who helped work on the "Sexiest Animated Character  bracket, "people are thinking about the way brackets work. And it gets at an interesting subject in terms of individual, one-on-one match-ups."

"It's not just an absurd March alternative to basketball," said Matt Sullivan, former Web director of Esquire (currently at the Atlantic Wire). "It's a template that can be applied to a lot of things. It's an easy enough concept for an Internet user without a lot of time to wrap their brains around and click through quickly."

At Esquire,"it started off as a quick evolution away from slideshows," said Sullivan, of his magazine's "Sexiest Woman" bracket. "It was a nice period where the Web was sick of pageview, Google-baiting news and starting to step into interactivity."

After all, in most brackets, readers vote in order to determine the best in a series of matchups -- it's a traffic-booster all through March. (With quite the culmination: "30 Rock" actress Katrina Bowden did a lingerie shoot for the Esquire site on occasion of winning the tourney.)

But behind the scenes, editors are also arguing passionately over seeding. Grantland, which runs brackets throughout the year (befitting a publication at the intersection of sports and culture), devotes days in its Los Angeles offices to the process.

"We all get in a room once we've figured out the idea for a bracket," said Mark Lisanti, an editor at Grantland. "We all figure out a day to get into a room and have a Thunderdome way to give scores for everything. We have to whittle it down to 32." For the recent bracket of worst "Oscar travesties" ever (the winner? Stanley Kubrick's career-long Oscar drought), that meant limiting the potential competitors to events after 1972, "so we wouldn't be arguing about the 1940s and '50s," said Lisanti.

"And we were trying to avoid doing too many 'snubs,' but a couple of us in the room got kinda loud for 'The Big Lebowski'" -- which won zero Oscars, and was disincluded from Grantland's ballot as well.

Some sites are less methodological. When it comes time for Jezebel's March brackets, the process is "totally arbitrary!" said Jessica Coen, the site's editor. "We compile a huge list and then I'll go through with [deputy editor] Dodai [Stewart], paring down which ones are the best. We'll sit and laugh for three hours as we try to rank them!"

But other processes are more elaborate, like that of the Morning News' long-standing Tournament of Books, which began in 2005 after a drunken night between editors in Brooklyn prompted comparisons between March Madness and literary competitions. The tournament's paring-down process this year ended up benefiting small-press books and "Gone Girl" -- but not Toni Morrison, whose most recent novel, "Home," was eligible and snubbed. (It had been considered an "auto-entry" by a Tournament of Books handicapping site, something that actually exists.)

"We spend months coming up with the list," said Rosecrans Baldwin, co-founder of the Morning News. "We get really criticized for it on numerous levels. How do you ignore Toni Morrison? She has a fucking Nobel Prize. And let's be truthful here -- there are not 17 flotillas of African-American female novelists in America. How do we ignore it? Well, it's not her best work. And she's already not only been in the tournament but won." The same thing ruled out Junot Díaz, a previous winner whose acclaimed 2012 story collection is absent.

And even this tournament -- which is judged not by reader votes but by successive new judges each round -- is all in fun. Rock singer Andrew W.K. "made his decision based on the covers of the books," said Baldwin. "People shat their pants twice."

Sometimes brackets can go horribly wrong. Though he didn't name names, Vulture editor Josh Wolk, whose site is currently asking critics -- not the public -- to determine the best comedy of all time from a field of 16 (and did the same with dramas last year), noted that after one decision, "There was a moment of dark silence. Why did we let this person into this world to make such a terrible mistake?"

But doing the "seedings" improperly before the readers vote can be just as dangerous as choosing the wrong judge. "I screwed it up," said Rovzar, of Vanity Fair's sexy-cartoon-character seedings. "I am not a big bracket person. I always lose our March Madness bracket here.

"We matched animals against each other, and fictitious beings, like robot and a panda. If we had stacked Kung Fu Panda against Prince Eric from 'The Little Mermaid,' Kung Fu Panda would have been out right away. We wanted to get the animals higher up, but we should have matched them against people." The end result was a tournament whose finals were predictable -- and won by the just-human-enough Jessica Rabbit, who Rovzar said probably shouldn't have been included.

"She actually is meant to be sexy."

Vanity Fair was lampooning the manner in which kids' cartoons are marketed to adults, but Esquire took the concept of "sexy" very seriously.

Sullivan, the former Web editor, said that his team did assiduous research into "the most searched women online. We made sure to include diversity -- that was important to us, so it  wasnt the same-looking pinups."

They also constructed entertaining "paths to the finals" through bumping up or down stars who seemed to have likely paths to the finals. But by 2012, Sullivan said, "the social web had taken over the narrative we wanted to craft" -- Twitter personality and G4 host Sara Jean Underwood (who?) had mobilized Twitter to get to the end. She won the whole thing. It was a Cinderella story -- albeit one that ends with a cheesecake photo shoot.

"Esquire is never one to let a franchise that's been around so long it's become repetitive live on in perpetuity," said Sullivan, who noted that the brief glimmer of Esquire's Sexiest Woman bracket had differentiated itself from other sites. "Jezebel was doing desserts, silly things like cupcakes or whatever, but we were engaging with celebrities on the social web."

Coen fired back in response: "If you're taking brackets that seriously, you need to re-evaluate your editorial priorities."

And Sullivan's not the only one who thinks the genre may have run its course: "Brackets are fun, but what's there left to do? Best extras on 'The Wire'?," said Steele, the Curbed publisher. "I personally am kind of exhausted by the concept, although both Grantland and Vulture have done great stuff in the genre -- and I think the fact that we can call it a genre means that it's exhausted."

But if a hall-of-mirrors brackets of brackets isn't enough to bring these ultimate pop culture showdowns to an end, it might be some time before those editorial priorities get another look.

Said Wolk: "The Internet will let you know when they've had enough. It will be no surprise to anyone when the Internet says we're on to something else."