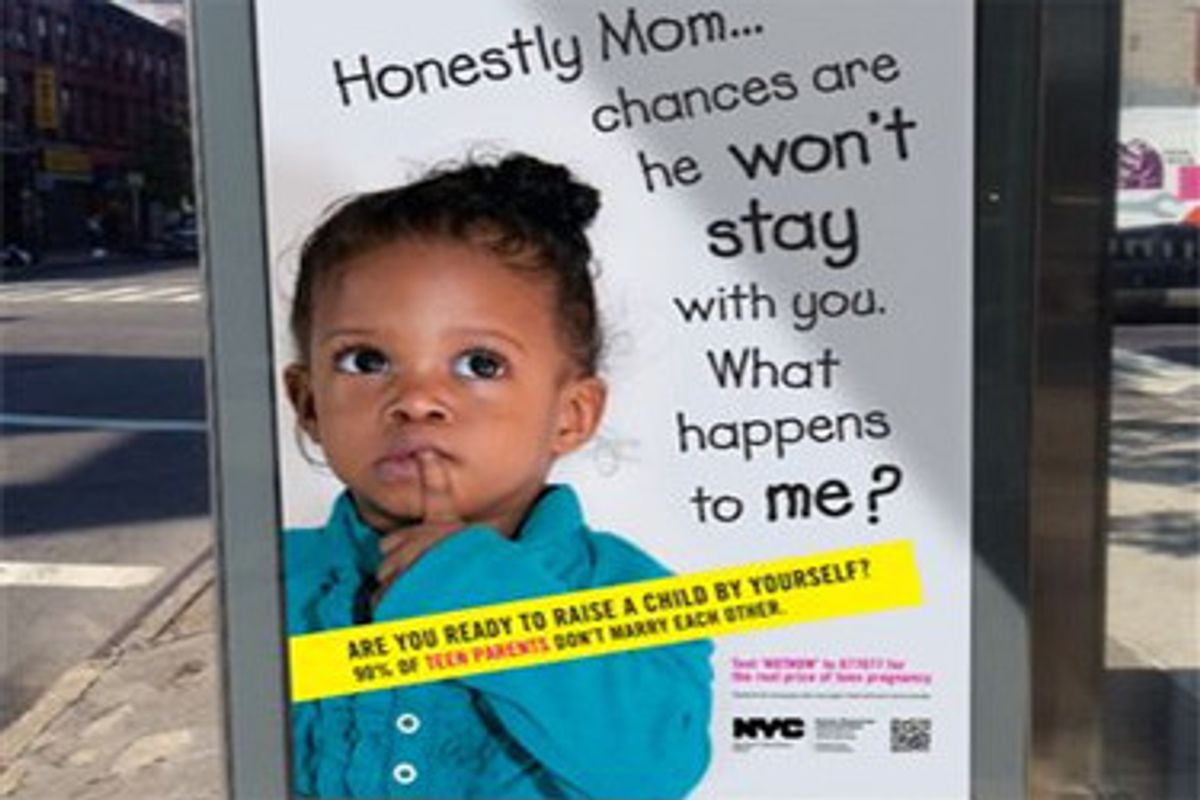 The New York Human Resources Administration launched a new ad campaign this week that uses "straight talk" in an effort to prevent teen pregnancy. The ads feature images of sad-looking children alongside messages like "Honestly, Mom ... Chances are he won't stay with you. What happens to me?" and "I'm twice as likely not to graduate high school because you had me as a teen."

The ads have already been harshly criticized for using these statistics to shame teen mothers rather than educating sexually active young people about where they can access condoms and other contraceptive care. But the subway and bus shelter ads aren't actually the worst part.

As reported by Miriam Pérez for RH Reality Check, at the bottom of each ad is the message: “Text ‘NOTNOW’ to 877877 for the real cost of teen pregnancy.” Text the number and you're directed to a choose your own adventure "game," which includes "scenarios about Anaya being ignored by her 'baby daddy' and shunned by her parents," but no information about how not to get pregnant. Instead, the texts use threats of social isolation, the prospect of losing your boyfriend and petty fat-shaming to drive home the message that teenagers who get pregnant are deserving of hardship and ridicule.

If you advise Anaya to go to prom anyway, this is her response: "My BFF called me a 'fat loser' at prom. I was devastated."

The message from the ads and the cellphone campaign is clear: If you get pregnant, it's your own damn fault if you're struggling.

Statistics around teen motherhood are sobering, but a campaign that places the blame for complicated social realities squarely on the shoulders of teen moms without looking at factors like access to the pill and abortion care, record unemployment rates and insufficient support from partners and family members is, at best, downright mean and counterproductive. At worst? It won't do a thing to reduce unplanned teen pregnancy rates in the city.

And, as Pérez notes on RH Reality Check, very few 16-year-olds think becoming a mom before they graduate high school will be a walk in the park. As teen mom and blogger Natasha Vianna’s writes of the ads:

When I was a teen, I knew how hard it was to be a teen mom because I saw it in my family and in families around me. My mom was a teen mom, my grandmother was a teen mom, my aunt was a teen mom, my cousin was a teen mom, and so many more. Yes, I saw girls drop out of school and struggle with many aspects of their lives. I didn’t need a lame ad with a picture of a crying baby (who of course had to resemble a minority) to tell me that. Yet, at 17, I still became a teen mom and it was NOT what I wanted for myself. I never thought to myself, “Ahhh yes, statistics say my kid would be twice as likely to not graduate than kids born to moms over 22. SO, I will have a baby now before 22 and accept the challenge.” So what makes you think most teens are going to think the opposite? Pregnancies are usually unplanned and accidental. These ads don’t prevent unplanned pregnancies.

The campaign is particularly strange considering the fact that New York health officials already know what prevents unplanned teen pregnancies: Better access to condoms and contraception like the morning after pill.

And they're actually doing a pretty good job of it. But the city doesn't want you to know that. Really.

The New York Post broke a story last month that the initiative to bring the morning after pill to New York City schools was actually much more widespread than initially reported. Despite claims from the city that only 567 Plan B pills were distributed among 13 schools, the truth is that close to 13,000 doses were given out.

And as the Huffington Post notes, publicity surrounding the successful birth control initiative has been quiet from the get-go. The pilot program, Connecting Adolescents to Comprehensive Health (CATCH), grabbed fleeting national attention in September of last year, but it has actually been active since January 2011.

Active and successful. As it turns out, putting contraception in the hands of teenagers who want it is a surefire way to reduce unwanted pregnancy. It's really as simple as that.

But rather than a subway ad from the city health department that reads: "Hey, we distributed 12,721 doses of Plan B in New York City schools over two years and guess what? Unplanned teen pregnancy rates are down," we have one that demonizes teen moms.

It seriously makes no sense.

So why not stick to what works in reducing rates of unwanted teen pregnancy and save the shaming for the New Yorkers who really deserve it: Those who don't stay to their right while ascending or descending subway stairs. (Just kidding! Don't shame them! OK, maybe shame them just a little?)