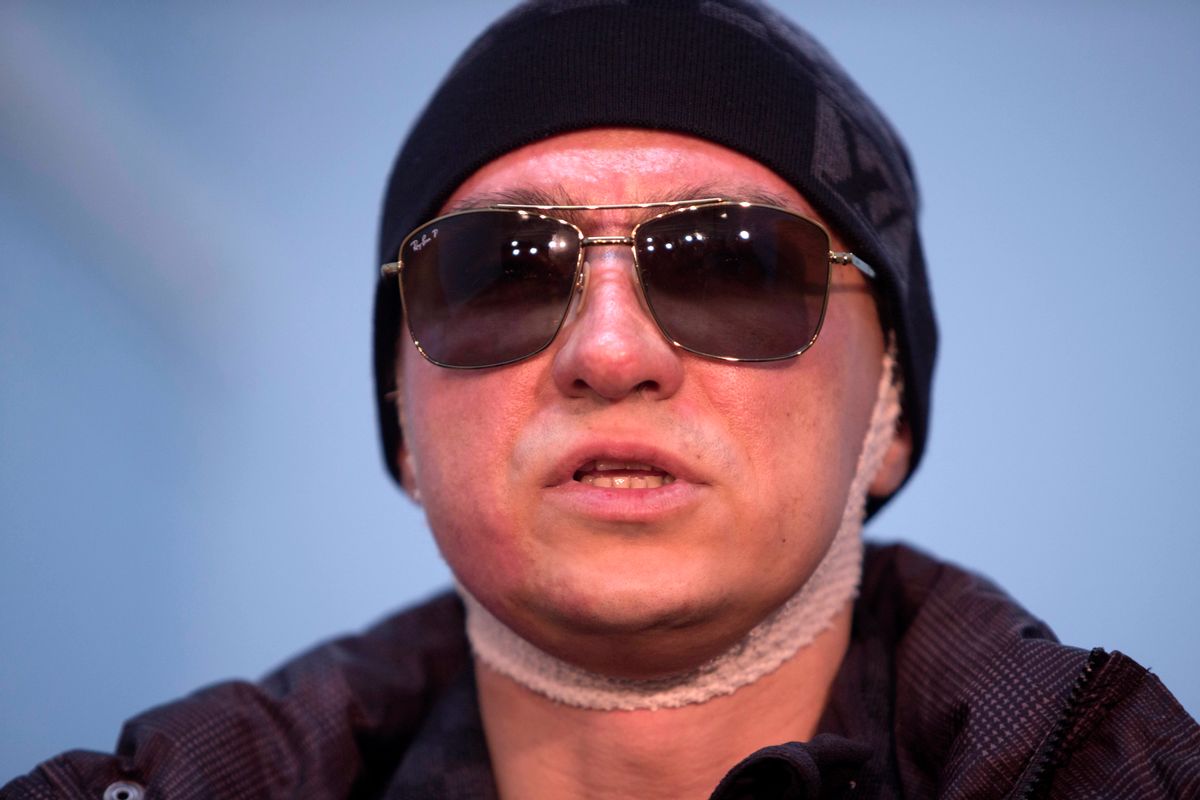 Sergei Filin speaks with the media as he leaves a hospital in Moscow, Russia. (AP/Misha Japaridze)
--

Facebook
Twitter
Reddit
Email
view in app
MOSCOW — A Russian ballet star who most recently played the title role in “Ivan the Terrible” at the famed Bolshoi Theater has confessed that he organized the acid attack on the theater’s ballet chief, Moscow police said Wednesday.Sergei Filin, the artistic director of the Bolshoi ballet, suffered severe burns to his eyes and face on Jan. 17 when a masked attacker threw a jar of sulfuric acid in his face as he returned home late at night. The 42-year-old former dancer is undergoing treatment in Germany.
Soloist Pavel Dmitrichenko has been detained in the attack on ballet artistic director Sergei Filin.
Star dancer Pavel Dmitrichenko, 29, confessed to masterminding the attack, and two other men confessed to being accomplices, police said in a statement.
“I organized that attack but not to the extent that it occurred,” a bleary-eyed Dmitrichenko said in footage released by Russian police.Moscow police said in a statement that investigators believe that Dmitrichenko harbored “personal enmity” against Filin.Investigators got suspicious of Dmitrichenko when they found out that he had recently been in a close contact with an unemployed convict. The suspects were making inquiries about Filin’s schedule and whereabouts and bought SIM cards for mobile phones registered under fake names, police said.Police found out that the acid that the alleged attacker, 35-year-old Yuri Zarutsky, splashed on Filin’s face was bought at an auto shop. Police said Zarutsky is believed to have heated it to make the water evaporate to make the acid stronger. On the night of the attack Dmitrichenko tipped off Zarutsky when Filin left the theater, police said.

Bolshoi spokeswoman Katerina Novikova told the AP that Filin had been informed about Dmitrichenko’s detention, but said the theater would not comment until after the trial.

Dmitrichenko, who comes from a family of dancers and joined the Bolshoi in 2002, has danced several major parts in recent years, including the villain in “Swan Lake.” Novikova said on Tuesday that management was unaware of any conflict between him and Filin. However, Channel One state television reported that Dmitrichenko’s girlfriend, Anzhelina Vorontsova, also a Bolshoi soloist, was known to have been at odds with Filin.

Dmitrichenko remained in police custody pending a court hearing on Thursday in which prosecutors will move for formal charges against the three men, and it was unclear whether they had lawyers.

The Bolshoi Theater is one of Russia’s premier cultural institutions, best known for “Swan Lake” and the other grand classical ballets that grace its stage. Backstage, the ballet company has been troubled by deep intrigue and infighting that have led to the departure of several artistic directors over recent years.

Filin’s colleagues have said the attack could be in retaliation for his selection of certain dancers over others for prized roles. Filin told state television before he checked out of a Moscow hospital in January that he knew who ordered the attack but would not name the person.

Zarutsky was detained on Tuesday in the Tver region north of Moscow, police said. Police had also detained and questioned another suspected accomplice, identified as Andrei Lipatov, who is believed to have driven Zarutsky to the scene of the crime.

Russian news agencies reported that Lipatov had been detained in Stupino, a sprawling Moscow suburb where the Bolshoi owns summer houses used by its dancers and management. Dmitrichenko said in a recent interview that he was managing the Bolshoi dachas in his spare time.The Bolshoi’s general director, Anatoly Iksanov, accused longtime principal dancer Nikolai Tsiskaridze of inspiring the attack. Tsiskaridze, a long-time critic of the theater’s management, has denied the allegation and accused Iksanov and his allies of fueling the dispute.
Dmitrichenko’s girlfriend was coached by Tsiskaridze.When contacted by The Associated Press Tsiskaridze texted back: “I have nothing to say...”Filin is the sixth artistic director at the Bolshoi since the legendary Yuri Grigorovich, who led the dance company for three decades, resigned in 1995 after losing a protracted dispute with theater management. Successive artistic directors have been unable to overcome the resistance from dancers and teachers still loyal to Grigorovich, but Filin was seen as capable of bridging that gap.The Izvestia daily on Wednesday quoted ballet teacher Marina Kondratyeva as saying that Dmitrichenko had a brilliant career and would not have needed to seek revenge on Filin.

Kondratyeva admitted that his girlfriend Vorontsova had not been given leading parts lately but for a good reason: “How could Filin ‘elbow her out’? Tsiskaridze is mentoring and coaching her — but she was just plain fat.”

Vorontsova danced for Filin when he worked at the Stanislavsky and Nemirovich-Danchenko Theater, Moscow’s second ballet company. Russian newspapers said that Filin expected Vorontsova to stay at the theater when she finished doing her apprenticeship but she went to Bolshoi instead — before Filin was hired to work there.

In a rare public outburst, Dmitrichenko posted an angry comment in November responding to a newspaper review which said his “artistic scope is limited not to mention his physical potential.”

Dmitrichenko on the website of the Kommersant daily accused the journalist of bias, calling the writer “a failed performer.” Kommersant later took down his comment. One of the screenshots of the detailed remarks read:

“I’m happy, I’m accomplished, I work with the genius of a teacher, I work with Genius, Grigorovich himself!!! What about you??”

Dmitrichenko was due to appear at the Bolshoi in “Sleeping Beauty” on March 16 where he played Bluebird.

Sasha Merkushev and Yelena Yegorova contributed to this report.