It's the real Florida 2016 primary, and it's happening right now 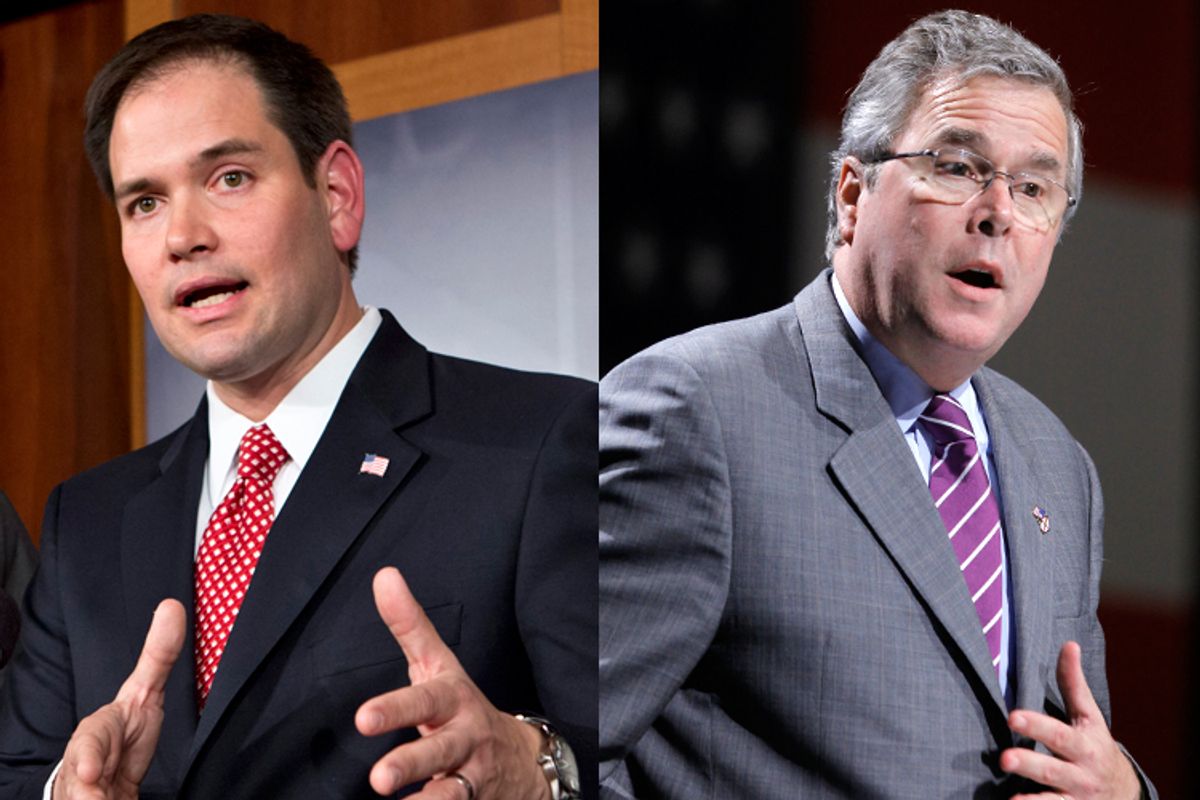 The always crucial Florida Republican primary in the 2016 presidential race is still almost three years away, but the state’s real primary battle may not be decided by voters at the ballot box, but by a small group of wealthy Florida donors after a battle fought on the airwaves and in backrooms.

Regardless of which names actually end up on the ballot in January 2016, there are two participants in a Florida primary happening right now: Jeb Bush and his ascendent former protégé, Marco Rubio. And it took on added intrigue this week with the flap over Bush’s book.

People who have worked in Florida politics say Rubio would be nowhere without the former governor. His initial election as a young state legislator; his meteoric rise in state House of Representatives to speaker after just five years; his improbable victory in the 2010 Republican Senate primary against establishment-backed Charlie Crist; his national visibility as a GOP rising star -- none of it would have happened without Bush’s imprimatur and guiding hand, they say.

When Rubio won the speakership in 2006, he took 22 staffers from Bush's office with him, and the government gave him a mystical golden warrior’s sword. In a ceremony marking his election, Rubio spoke first, then Bush, who said the first Cuban-American Florida speaker was a tough act to follow. "I can't think back on a time when I've ever been prouder to be a Republican, Marco. That's the end of my speech," Bush said.

“Chang is a mythical conservative warrior,” Rubio explained years later. “From time to time, if there’s a big issue going on, you’d see Jeb say, ‘I’m going to unleash Chang.’ He gave me the sword of Chang.”

But as Rubio’s potential grew, his ambitions grew with it and it soon became obvious to everyone that Florida may not be big enough for the two men. As BuzzFeed’s McKay Coppins wrote recently in a wonderful profile of the Miami area hotel at the center of Florida political life, “With their shared passion for immigration reform, overlapping donor networks, and long, healthy alliance, Rubio and Bush have put Miami's political class in the improbable position of having two favorite sons in the top tier of 2016 speculation — and sources say both men are actively mulling a run.”

State Rep. Dennis Baxley, whom Rubio beat for the speakership, made the first recorded suggestion that Rubio might run for the highest office in the land one day. "I wouldn't be surprised if he's governor someday," he told Adam Smith of the St. Petersburg Times on March 4, 2007. "Or maybe even president."

When Bush was preparing to leave office, Rubio summed up his mentor’s legacy like this in an interview with the Orlando Sun Sentinel: “I will tell you that having a governor like Jeb Bush is a positive, not a negative. This is a governor, despite how you feel about what he stands for, no one will be able to attach the ‘do-nothing’ label to him,” Rubio said rather coolly.

Since the 2012 election drubbing, Rubio has emerged as the early front-runner for the 2016 GOP nomination. He gave his party’s response to the State of the Union address, he’s become the linchpin in an emerging bipartisan deal on comprehensive immigration reform, and he’s been labeled the “savior” of the Republican Party. These are not the actions of someone content to remain the junior senator from Florida.

But Bush has always been the one who was supposed to run first, strategists say, and he is reportedly already building a stealth campaign operation. Some see the release of his new book on immigration, with its aggressive media campaign associated with it, as an obvious sign that he’s eyeing 2016.

A few months ago, the Tampa Bay Times polled Florida’s “most plugged-in political players” (campaign operatives, fundraisers, lobbyists, etc.) and found that they overwhelmingly favored Bush. More thought Bush would mount a run than thought Rubio would, and a striking 81 percent said that Bush would be the stronger candidate.

“Jeb Bush is heads and shoulders above Rubio, literally," one Republican respondent wrote.

Washington analysts and casual observers nationally might well break the other way, favoring the young, relevant (and Hispanic) Rubio over the older, staler (and white) Bush.

But even if Florida’s politicos are wrong in their handicapping, they may ultimately prove themselves correct in that either man would depend on the very same Florida donors and party bosses to be the foundation for a presidential run. If both men ran, it would tear the political class apart in a costly civil war that could leave whoever emerges victorious anemic and with ugly tensions at home.

That’s why many Florida politicos expect the state’s real primary will happen behind closed doors, long before voters have even tuned in, when donors and strategists and party chairs line up on one side or the other, Bush and Rubio quietly decide which man will run, and which man will go on TV to say he’s thrilled to support his dear friend in the most important election of our lifetime.

And while Bush may have won that particular poll, some Florida observers say privately that Bush isn’t serious about a run. In an age-old gambit, Bush is using the specter of a White House bid to boost his national profile, so he can continue to have a voice in the GOP on issues like education and immigration reform, and to enrich himself.

There’s also that problem with his last name. “Jeb is weighed down heavily  -- very heavily -- by his name,” one Republican strategist said in the Tampa Bay Times poll. Indeed, even exit polls from November of last year show most American still blame Bush’s brother for the down economy, not Obama.

There have also long been rumors of skeletons in the closet. Whether it's scuttlebut about shady real estate dealings in the 1980s or the fact that he’s had to deny rumors of extramarital affairs with a cabinet appointee, among others, the searing scrutiny that comes with running for president may be enough to dissuade Bush from running, one Democratic strategist who has worked in Florida said.

The fact that Bush recently tried to buy the Miami Marlins doesn’t make him look very serious either (although he wouldn't be the first baseball-owning Bush to eventually become president).

And this week, add another blow to Bush: The fiasco of a rollout of his new book on immigration. “Bush really fucked his brand,” one Florida strategist said privately of Bush’s flip-flop on immigration. For over a decade, Bush cultivated an image as a reasonable and bilingual wonk, concerned with ideas over politics. But his admission that he broke from his long-held support on pathway to citizenship because he thought it might be politically damaging in a year blows all of that up and shows his rust.

In contrast, even Democrats in Washington speak with reverence about Rubio’s team. “I’m not so sure Rubio is as amazing as everyone says, but his team is. They smelled the potential on him and attached themselves early,” another Democratic strategist said.

Compare the way Bush bungled his immigration flap to how Rubio effortlessly and humorously smoothed over his State of the Union water gaffe.

And Democrats are only too happy to fan the flames between these old friends.

“Let’s wait for a few minutes and see how Jeb Bush changes his mind again,” Senate Majority Leader Harry Reid said yesterday at his news conference in the Capitol. “His opinion on immigration is not evolving; it’s devolving. He keeps going backwards. I think, frankly, he’s made a fool of himself in the last 24 hours.

"Frankly, on this issue, I don’t think Jeb Bush is a Florida leader. I think Marco Rubio is," Reid added. "Bush has been elected to nothing lately. Rubio is the leader on immigration."