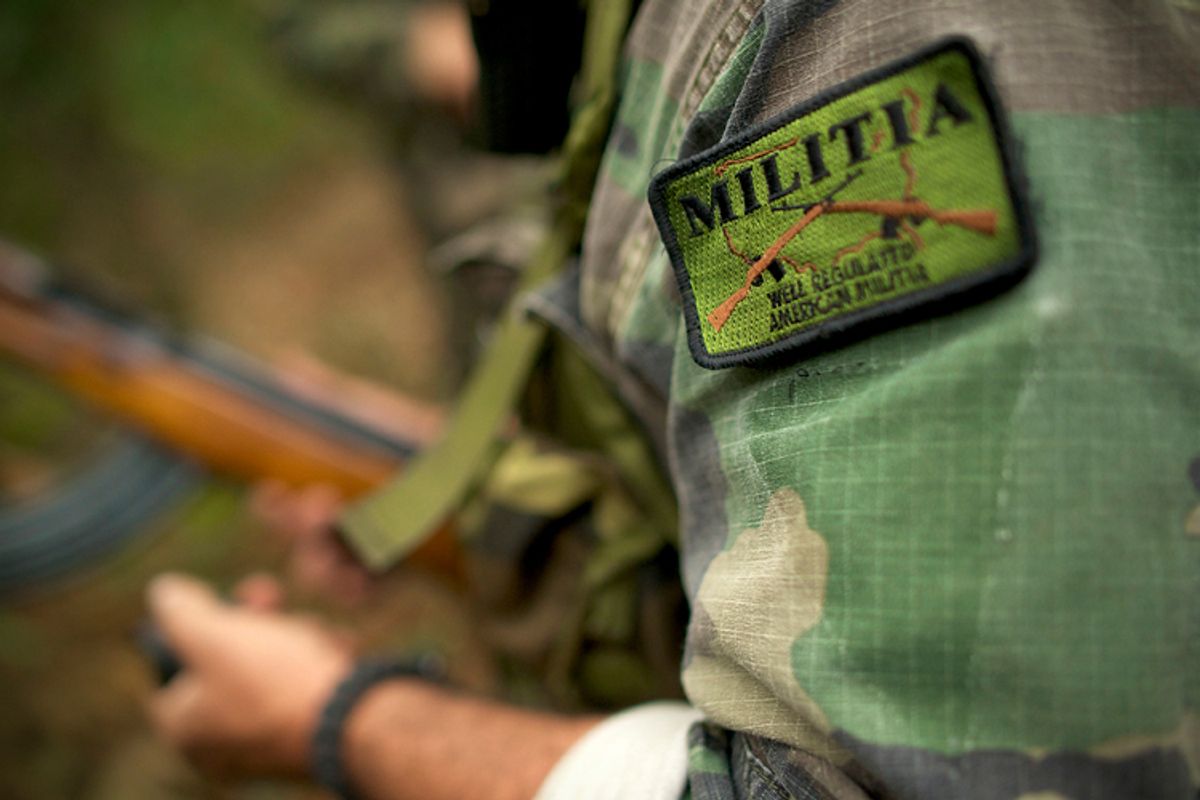 While the more mainstream anti-government Tea Party movement faded from view as the GOP co-opted it in the past few years, the action has moved to the fringes, where the number of radical right-wing Patriot groups reached an all time high in 2012, according to a new report from the Southern Poverty Law Center. What's more, it's the fourth year in a row that the record has been broken.

Conspiracy-minded Patriot groups first entered the public consciousness in the 1990s with the rise of the militia movement, and then the Oklahoma City bombing. Now, the SPLC is warning government officials that they see eerie similarities between the current era and that leading up to the bombing.

“As in the period before the Oklahoma City bombing, we now are seeing ominous threats from those who believe that the government is poised to take their guns,” the group's president, Richard Cohen, wrote in a letter sent Tuesday to Attorney General Eric Holder and Homeland Security Secretary Janet Napolitano.

The number of Patriot groups peaked after the bombing in 1996 at 858, before falling off steeply and remaining low under George W. Bush. However, since the election of Barack Obama, the number of groups tracked by the SPLC has skyrocketed and continued to climb. Meanwhile, the number of hate groups the group tracks -- which includes some arguably mainstream conservative groups like the Family Research Council, in addition to more radical groups like white supremacists -- remained over 1,000.

The SPLC blames the resurgence on the down economy (hate and radicalism always tick up when things seem desperate), along with the election and reelection of Barack Obama, a push on gun control, and racial tensions over immigration and the declining power of white America.

"Another factor driving the expansion of the radical right over the last decade or so has been the mainstreaming of formerly marginal conspiracy theories," notes senior fellow Mark Potock. Indeed, one needs only watch Fox News for an hour or read a Dick Morris column to see that. And conspiracy theorizing seems to have reached new heights recently.

The big fear is that some of this will lead to violence -- or rather, more violence. The incidents are too often ignored or viewed as isolated from each other, but there has been much more right-wing terrorism than most people probably realize, from the Sikh Temple shooting, the Holocaust Memorial shooting, the Pittsburgh police shootings, of any of the dozens of attacks on law enforcement officers.

But the people in the federal government responsible for stopping it are poorly equipped to deal with the threat. In part, that's because Republican lawmakers, stoked by the Tea Party, neutered a Department of Homeland Security task force that was supposed to track homegrown radical groups. After a conservative uproar over a leaked report that warned about the rise of right-wing radical groups in the wake of Obama's election, DHS relented. It repudiated the paper and dissolved the group responsible for it.

“DHS is scoffing at the mission of doing domestic counterterrorism, as is Congress,” Daryl Johnson, the man who led that task force, told Wired last year. “There’ve been no hearings about the rising white supremacist threat, but there’s been a long list of attacks over the last few years. But they still hold hearings about Muslim extremism. It’s out of balance.”