Rand: Craftier than his dad 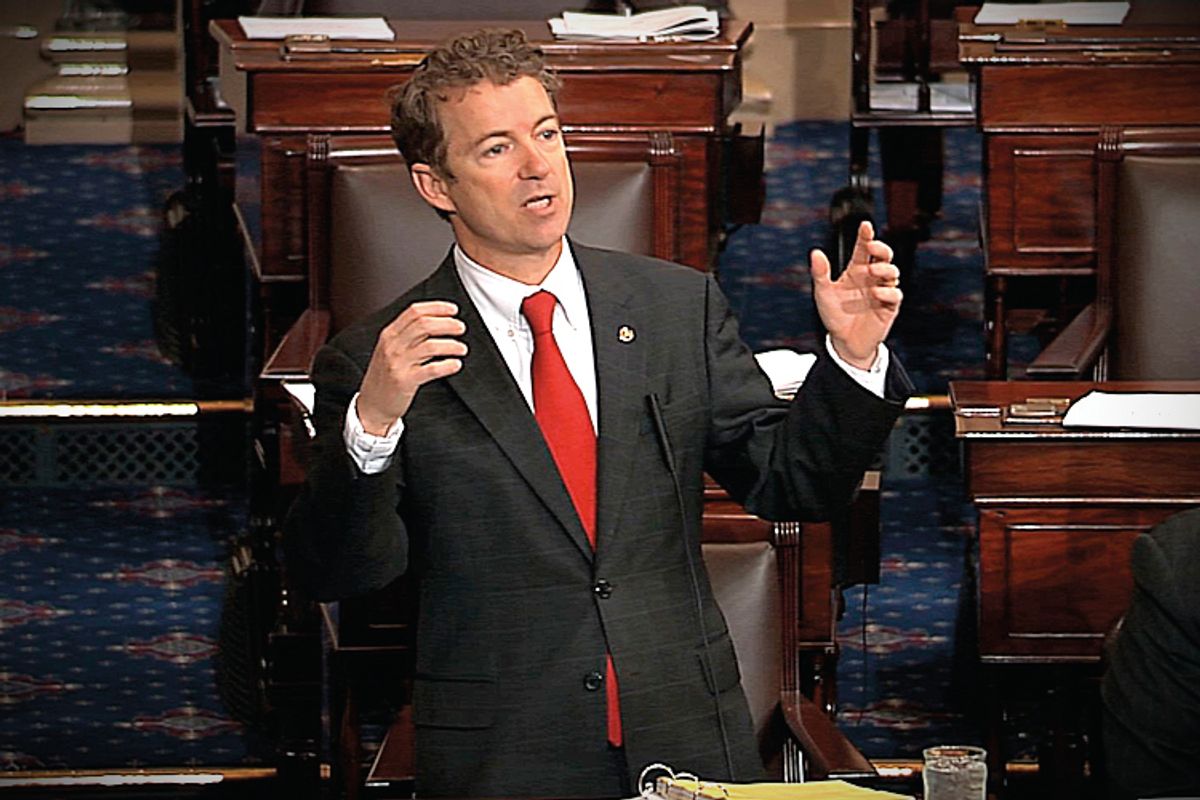 Rand Paul has made plenty of noise since his election to the Senate in 2010, but he’s standing out more than usual right now, thanks to his marathon filibuster of John Brennan’s nomination to run the CIA. The filibuster itself, as Paul himself acknowledged, was doomed from the start. There were already more than 60 votes to bring Brennan’s nomination to the floor and well more than 50 to confirm him, and nothing he said was going to change that. So he was essentially putting on a show, and the question becomes: Why?

The obvious answer is that Paul has a genuine and principled objection to Brennan, the architect of the Obama administration’s drones program. Until Brennan’s nomination, there hadn’t exactly been an abundance of news coverage of the drones issue, which figures to recede from the headlines once Brennan’s nomination clears. And even though he did face some pointed questions during his confirmation hearings, Brennan didn’t exactly face the sort of withering examination drone critics were hoping for.  So the filibuster was Paul’s last, best chance to shine a light on an issue that matters to him before the media moves on to something else.

But the filibuster also speaks to Paul’s ambition and crafty political instincts, attributes that distinguish him from his father and that are helping him reposition the family name away from the fringes of the Republican Party and closer to its mainstream. If Rand Paul does run for president in 2016, his campaign will have a credibility that Ron Paul’s three bids for the Oval Office lacked.

Rand is cut from the same libertarian cloth as his father and became the sole caretaker of the family’s political brand when Ron retired from the House after last year’s election. Ideologically, there are no major differences between the two Pauls, and there are stylistic similarities too; like his dad, Rand hardly minds being the lone “no” vote in a sea of “yes” votes. But unlike his dad, Rand seems to pick his spots with at least one eye on the bigger picture of politics.

Take the Brennan filibuster. Paul has a lot of idiosyncratic and passionately held views, but he’s never made as dramatic a stand on any of them as he did with this. It probably helps that there’s no obvious political downside. Brennan and the drones program in general have their defenders on the right, but because they both have Obama’s stamp on them now, the Republican universe is far more open to the civil liberties-based critique that Paul is offering.

At the same time, the drones issue is non-mainstream enough that Paul can claim it for himself and carve out a leadership role. That’s what he’s done with the filibuster. When he began, it seemed likely that he’d hold the floor for a few hours then give in to reality. But as the day and night went on Wednesday, a stream of senators decided to join him – including two conservative icons (Marco Rubio and Ted Cruz), one of the top Republicans in the Senate (John Barrasso) and even a Democrat (Ron Wyden). By 10:30 at night,  the chairman of the Republican National Committee was urging GOP senators to go to the floor to #StandWithRand. It all made Paul seem a lot more like a leader than a loner, and enhanced his stature within the GOP at least as much as it did with civil libertarians who will never take a Republican ballot.

We’ve seen this kind of calculation by Paul before, balancing the unique worldview associated with his family name with a desire to play more than a gadfly’s role in the Republican Party. So while, for instance, he largely shares his father’s non-interventionist values, Paul has finessed his views in deference to the more hawkish, pro-Israel consensus in his party – backing a missile defense system, making clear that he has no objections to the Israeli settlers in the West Bank, and saying that the U.S. should make clear that “any attack on Israel will be treated as an attack on the United States.”

This is in stark contrast to Ron Paul, who seemed to relish his outcast’s reputation. The elder Paul spent decades preaching the same political gospel; his stump speech from his 1988 presidential campaign (when he ran as the Libertarian nominee) could just as easily have been used in his 2012 campaign. He made little effort to downplay views that were at odds with the GOP consensus and wore his dissent as a badge of honor. His 2008 White House campaign gained unexpected traction when he was the lone voice critical of George W. Bush and the Iraq war during the GOP debates. But much of the traction he gained was with voters outside the Republican Party; within the GOP, there was a clear ceiling on his support, something that remained true in 2012. For all the attention he received and grass-roots money he raised, Ron Paul never won a single Republican primary or caucus. Rand, on the other hand, is winning praise from Republican voices that condemned his father.

It’s unclear where the intraparty ceiling is for Rand Paul, but it’s undoubtedly higher than it was for Ron Paul. This says something about the GOP and its Obama-era embrace of anti-government absolutism. But it says just as much about Paul’s desire to play a consequential role in his party and in national politics. If he does run for president in 2016, he’ll be taken a lot more seriously than his father was, and for good reason.