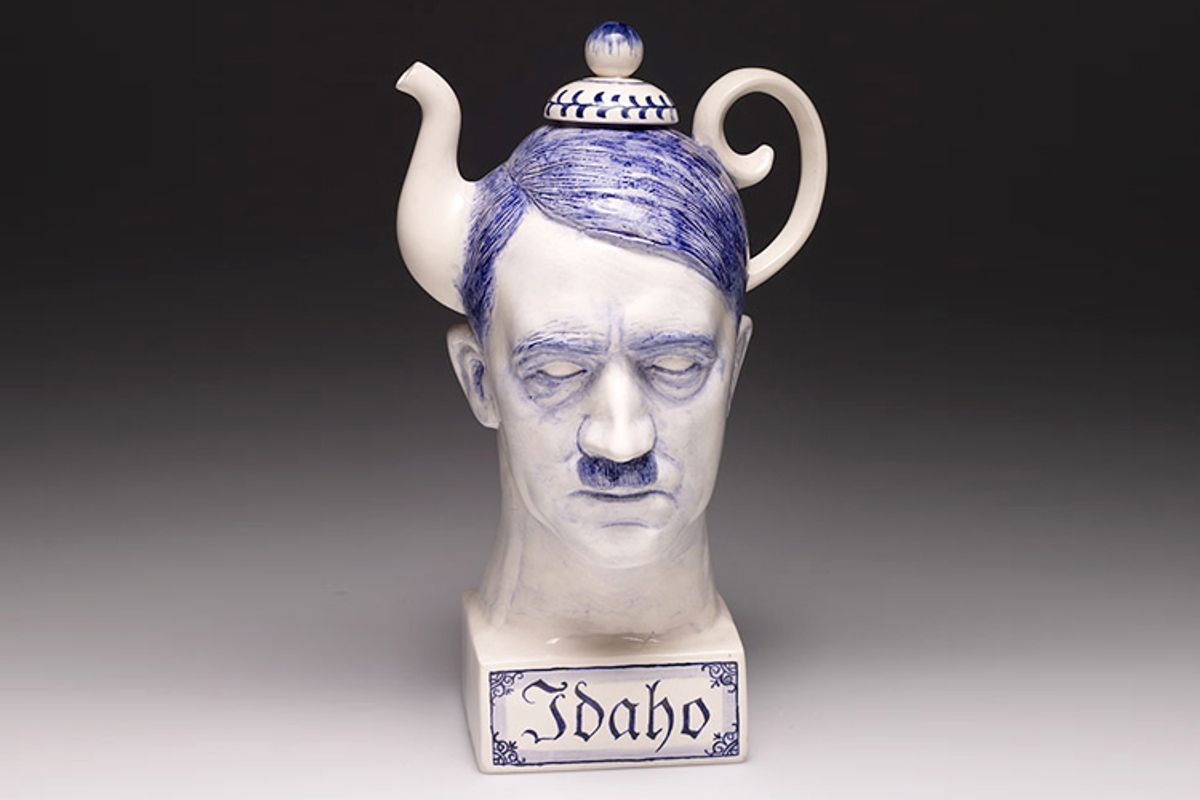 (Image courtesy of the Fine Arts Museum of San Francisco)
--

For decades, iconoclastic Seattle artist Charles Krafft has made references to Nazis in his highly acclaimed, sometimes shocking pieces of art that most critics and art lovers brand as simple, ironic satire pushing the boundaries.

He crafted a ceramic Hitler-bust teapot now in a San Francisco art museum, and put swastikas on other pieces of art, even on a ceramic wedding cake. He made a ceramic Uzi assault rifle, hand grenades and an “assassin’s kit” – a gun and dagger.

Now, the 65-year-old hippie-turned-artist is at the center of a growing controversy following a published report detailing evidence — including his own words — that suggests he is a white nationalist who believes the Holocaust is a myth.

Hundreds of comments about Krafft are being posted on Facebook and Twitter and elsewhere, and the art and culture world — particularly in ceramic art circles — are abuzz over the revelations published in The Stranger, a Seattle alternative paper. The headline on that piece was hard to misunderstand:  “Charles Krafft Is a White Nationalist Who Believes the Holocaust Is a Deliberately Exaggerated Myth.”

Beyond E-mail correspondence with Krafft, writer Jen Graves reported that she had found Krafft’s comments on a white nationalist website where he makes repeated anti-Semitic remarks. “I believe the Holocaust is a myth,” Krafft says on a podcast published last July.  The article goes on to say that Krafft believes the Holocaust is “being used to promote multiculturalism and globalism.”

Krafft, sounding as if he, too, is surprised by the backlash, didn’t back away from any of that when contacted by Hatewatch.

“Since I’ve admitted to being a Holocaust skeptic and identifying as a WASP on a White Nationalist website, I really can’t claim I was smeared,” Krafft said. “However,” he continued, “I would like to point out that I never tried to dupe liberal art collectors and curators with satire and irony in my art while laughing at them. I came by my controversial opinions on race and WWII history relatively recently.”

In one white nationalist podcast, Krafft says Christianity is being replaced “by this new secular religion of the sacrifice of 6 million Jews. And the museums, memorials, monuments, study centers, Holocaust chairs at the universities — it’s all part of the promotion of a new kind of, like I said, civil religion maybe. … We’re the heretics in a new religion that’s being promoted and built up and being embraced by governments throughout the United States and Europe.”

The Stranger’s piece on Krafft — reposted repeatedly on the Web — has hit particularly hard in the art world.

“When this broke loose, it all did come as a big surprise,” nationally known ceramic art dealer, historian and author Garth Clark, of Santa Fe, N.M., told Hatewatch. Clark has sold Krafft’s art works and spoken with the artist numerous times, but never represented him.

“This was an artist who, in the ceramic world at least, was very well liked and respected,” Clark said. While Krafft’s work always has “had a very dark side to it,” Clark said that the art world had “assumed the dark side was ironic. In fact, everybody made that assumption.” After all, he said, people in the art world are “prepared to deal with pretty raw ideas.”

Michael Upchurch, the art critic for the Seattle Times, said the revelation about Krafft came as a surprise to him and others in the city’s art community. “He’s definitely big time here in the art community, that’s for sure,” the writer said. “I’ve always thought his work was humorous,” the product of a clever artist who tackles horrific subject matters with a fine porcelain medium, he said.

Krafft always has been at the leading edge of provocative art. Clark recalled a series of ceramic art works the Seattle artist did a decade ago, claiming to use human cremains for pieces he called “Spone,” a satirical poke at the 18th-century English ceramics artist Josiah Spode, who used crushed animal bones to produce “bone china.” “Most of us thought that was kind of radical, and deeply, darkly amusing,” Clark recalled.

Using Hitler’s bust to make a ceramic teapot or referring to the Holocaust in art is one thing, Clark said, but actually embracing and promoting white supremacist and Holocaust-denying views is “ridiculous.” Now, some suggest that Krafft’s teapot was a clever way to keep the Nazi leader’s image alive and on public view.

With these new revelations and Krafft’s own words and postings on his Facebook page, Clark said there “doesn’t seem to be much doubt that he is, indeed, a white supremacist and a Holocaust denier. “Being provocative in a way that’s intellectually valid is one thing, but it’s another if the artist is actually being bigoted.”

As the criticism grew this week, Krafft posted a new Facebook photo of a piece of metal sculpture he calls “Fowlschwitz,” a concentration camp for birds – a birdhouse surrounded by barbed wire.

He didn’t talk about that, but he did tell Hatewatch that he believes the Seattle newspaper article wrongly suggested that he was concealing the intent of his art for years and urged collectors and museums to re-examine his work “for subversive content” and then censor or cut off access to the pieces.

“Very, very little of the art I’ve made has had any Nazi symbolism in it,” Krafft claimed. “I’d like to point out to those I speak with about articles accusing me of being a Nazi in sheep’s clothing how dishonest I think this is.

“I would also point out there are differences between Holocaust denial, Holocaust skepticism and Holocaust revisionism, White supremacy and White Nationalism that have been overlooked, or blurred for shock value, and [that blurring has been used] to paint me in the worst light possible,” he told Hatewatch without elaborating on what he sees as the differences.

“My deep research, here and abroad, into 27-year harassment of Archbishop Viorel Trifa, the founder of the Romanian Orthodox Episcopate in America, was instrumental in contributing to the formulation of my reactionary opinions,” he said.

Despite his attempts at explanation, criticism of Krafft is still boiling, with pointed anger directed at him showing up in some Facebook posts.

“I was devastated about the revelation that Krafft was a Nazi sympathizer and anti-Semite,” New York author and blogger Phil Campbell, formerly of Seattle, responded when reached for comment by Hatewatch.

Most of Krafft’s art, Campbell said, “relies on the idea that Krafft as an artist is treating the themes he manipulates — violence, Nazis, the Holocaust among them — with a deft, ironic sense of humor. If he’s sincere (in his personal beliefs), the work itself is corrupted, which is an irony in itself (albeit a twisted one).”

“Conceptual art can be a dicey issue, with so much left open for the audience in terms of the inference of meaning, but this is one of those very specific cases, I think, where the artist’s intent is absolutely crucial to the understanding of the objects made; the artistic intent changes the meaning of the art,” Campbell said. “If Krafft is indeed a Holocaust denier, as he appears to be, then it corrupts the art itself. I simply cannot look at any of his art in the same way again. Only Aryan Brotherhood members are going to want to buy his porcelain hand grenades now.

“I also think this also could be the case of a man well past his prime who is indulging some delusional tendencies that have been there for a very long time, but perhaps weren’t that strong in the beginning,” Campbell continued. “Krafft has always been an iconoclast, but now his iconoclasm is hardening, becoming a deadening ideology. The older he gets, the more his opinions seem to be calcifying, degrading.”

“Since the Stranger piece came out I know of several people who claim that Krafft has intimated all along that he harbors certain sympathies for these anti-Semitic opinions,” the art critic said. “Perhaps. But now Krafft is making his beliefs public, so now there should be no doubt.”

David Barclay Moore, a Brooklyn-based writer, filmmaker and photographer, also was among dozens who took to Twitter to comment on the Krafft controversy.  Contacted by Hatewatch, Moore said the revelation may devalue pieces of the artist’s work and make them less powerful.

Krafft’s’ work was ingrained with a sense of creative spirit — “elements of bitter histories into comic ironies,” Moore said.   “Now that at least some of his art appears to have originated from a much more literal place, their once perceived brilliance must rinse off in the wash, leaving behind an embarrassingly dull residue of thoughtless intolerance.”

In Washington, D.C., travel and art writer Melanie Renzulli, who once worked in the U.S. Holocaust Memorial Museum, also posted comments about the controversy.

“If Jen Graves’ theory is true, that Krafft may have used art as a means of smuggling in a nationalist-white power message, then I think that curators in those museums that own artworks by Krafft should consider shelving or archiving his work rather than taking advantage of the controversy,” Renzulli told Hatewatch.

Now, his pieces of work are “insensitive to survivors and their families,” she said, especially in light of a recent story in The New York Times detailing new research that shows there were 42,500 Nazi ghettos and camps throughout Europe – far more than ever believed.

“Krafft’s art seems to exist to desensitize, to diffuse the power of some of the world’s controversial symbols,” Renzulli told Hatewatch. “In doing this, it seems that deniers and/or Nazi sympathizers can rally around a swastika in plain sight. Even if this is one big joke by Krafft, it’s not a very funny one.”