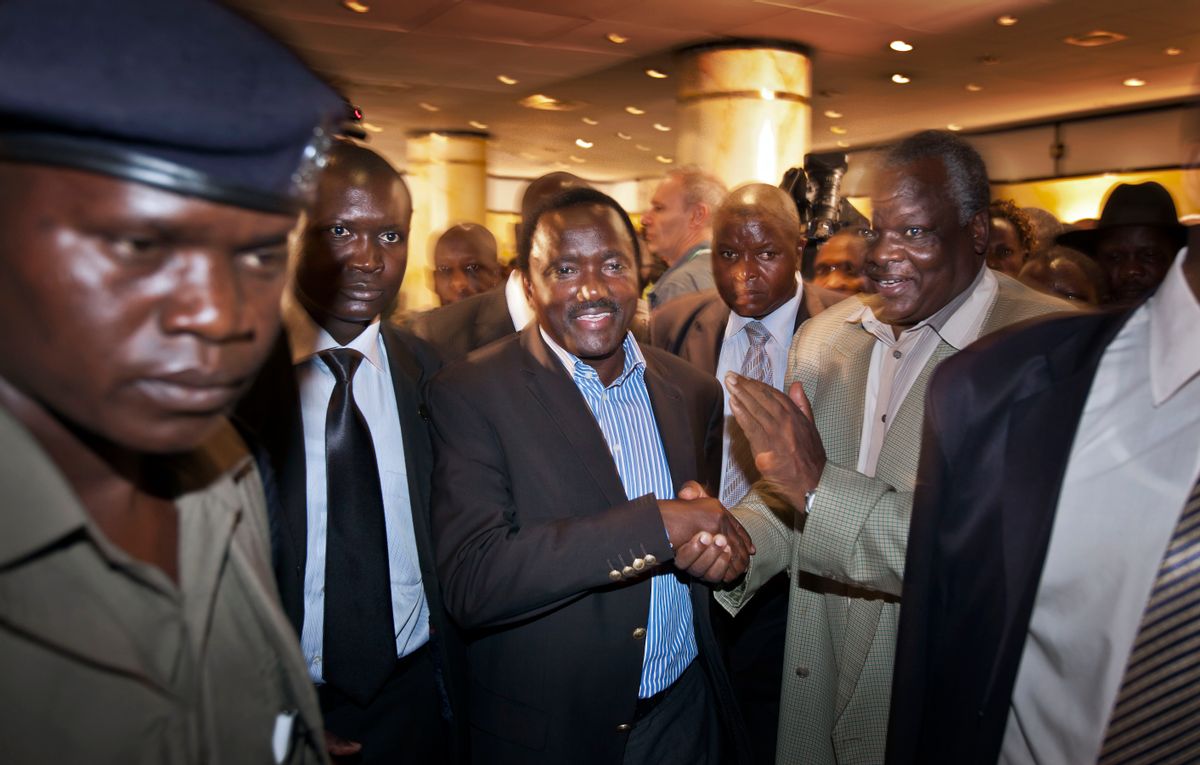 NAIROBI, Kenya (AP) — The political coalition led by Kenya's prime minister said Thursday that the vote tallying process now under way to determine the winner of the country's presidential election "lacks integrity" and should be stopped, as it alleged that some vote results have been doctored.

The statement by the coalition of Raila Odinga — one of two top presidential candidates — said the counting process should be restarted using primary documents from polling stations.

Kenya on Monday held its first national election since its 2007 vote sparked tribe-one-tribe attacks that killed more than 1,000 people. Minor protests have cropped up since Monday's vote, but no massive rioting or ethnic violence has occurred. But as more time passes without a final result, tensions are rising, sparking fears that the dam now holding back potential protests could break.

Though Odinga's party said it continues to call for "calm, tolerance and peace," its call for a halt to the vote count and allegations of vote rigging could agitate its supporters. Vice President Kalonzo Musyoka, Odinga's running mate, said the announcement "is not a call to mass action."

Odinga's supporters in 2007 felt they had been cheated out of an election win over President Mwai Kibaki. Those supporters took to the streets, kicking off two months of clashes that, in addition to the ethnic violence, saw more than 400 deaths caused by police who were fighting protesters. A 2008 government report said the results were so tainted it was impossible to say who actually won.

Odinga faces Deputy Prime Minister Uhuru Kenyatta in this year's election. One of them must capture 50 percent of the vote in order to win; otherwise there is a runoff.

Officials on Thursday continued to add up votes from tally sheets that have been transported to the capital, results that are being played across all Kenyan TV screens. The partial results as early afternoon Thursday Kenya time showed Kenyatta with nearly 2.5 million votes to Odinga's nearly 2 million. Less than half of the vote had been tabulated.

Musyoka told a news conference that "we have evidence that the results we are receiving have actually been doctored." He then listed several voting districts where he said the total votes cast exceed the number of registered voters. Musyoka also said that Kenyan law requires that vote results be transmitted electronically from polling stations before transporting the results.

He said Odinga's party was exploring several options to stop the vote count, including getting a court injunction. The electronic tally that was to serve as a preliminary vote count and be available soon after the polls closed failed on Tuesday, leaving the country in a tense information vacuum late Tuesday and Wednesday.

One issue that arose Thursday was why rejected ballots are no longer reflected in the count in high numbers. When the preliminary count froze on Tuesday there was more than 330,000 rejected ballots, an important issue because of a legal fight that will be launched over whether those ballots should be counted in the overall vote total, thus making it harder for a candidate to reach 50 percent of the votes cast.

On Thursday, by contrast, official vote tallies showed a very low number of rejected votes, leading to questions about where they all went. The election commission was to hold a news conference later Thursday but had yet to make any statements as of mid-day.

Kenya is the lynchpin of East Africa's economy and plays a vital security role in the fight against Somali militants. The U.S. Embassy in Kenya is the largest in Africa, indicating this country's importance to U.S. foreign policy.

The political battle between the families of Kenyatta and Odinga goes back to the 1960s and to the two candidates' fathers. Jomo Kenyatta was Kenya's first president after the end of British colonial rule. Jaramogi Oginga Odinga served as the country's first vice president then. The two later had a falling out.

If a runoff is declared for Odinga and Kenyatta, it would be most likely held in late April or early May, depending on how long legal challenges take.