"The Americans" star lived in Wales during the Cold War. Now he is seeing the Red Scare through his TV kids' eyes 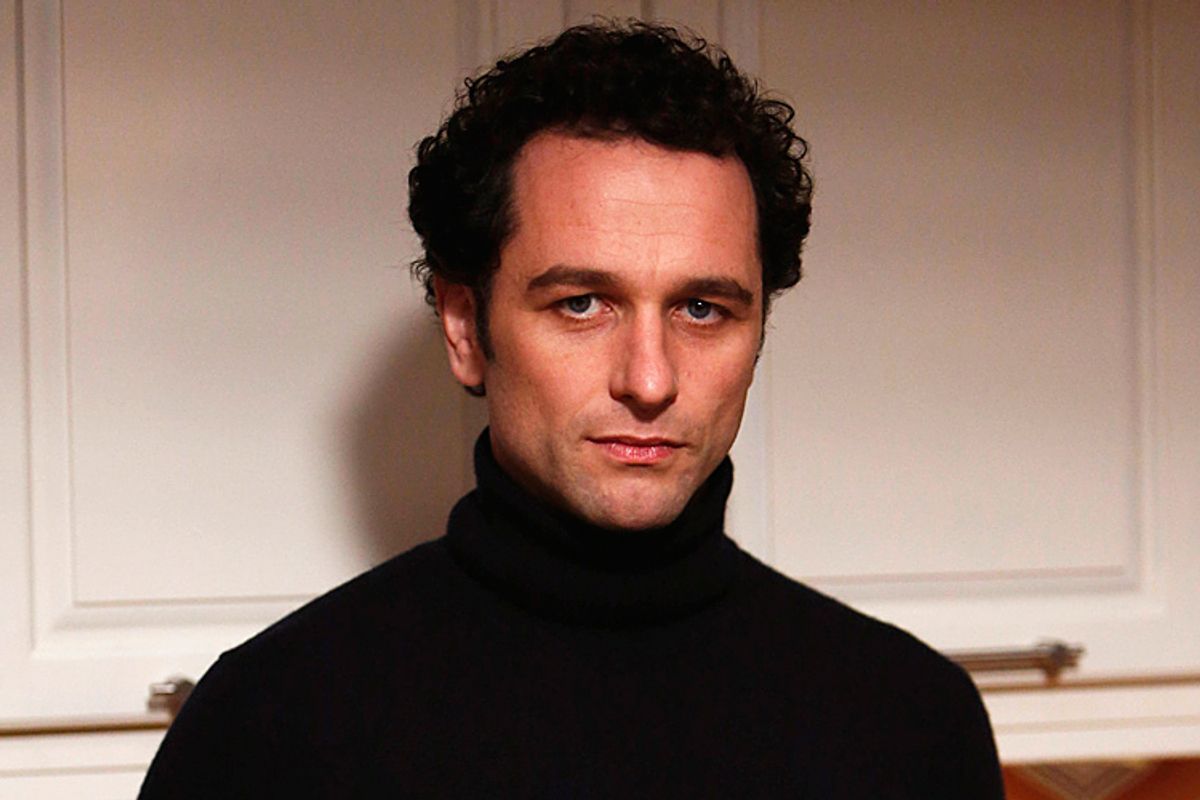 Matthew Rhys as Philip Jennings on "The Americans" (FX/Craig Blankenhorn)
--

The Cold War-era espionage thriller "The Americans," which is halfway through its first season on FX (and airs on Wednesday nights at 10 p.m. ET), is not the first series to challenge the audience to identify with unsympathetic characters. But this early 1980s drama pushes American views a little harder, asking us to root for KGB sleeper cells living in suburban northern Virginia as Americans — and see CIA and FBI agents as the enemy. Welsh actor Matthew Rhys, who last appeared on U.S. television in ABC's  family drama "Brothers & Sisters" as a gay lawyer (and whose TV brood included Rachel Griffiths, Calista Flockhart and Sally Field), returns to the small screen to play Philip Jennings, a Russian spy, who takes all of his roles very seriously, no matter which identity he's assumed. He is an effective strategist when it comes to collecting intelligence — and a scrappy thug when he needs to be. But equally interesting is the domestic drama within "The Americans": Philip is devoted to his wife, Elizabeth (Keri Russell) — despite the fact that theirs is an arranged, sham marriage — and an extremely protective father to their daughter and son, who know nothing of their parents' secret and past lives. And part of Philip wonders if it would just be better for the family to defect, to buy into the American way of life — which would, of course, mean betraying his country and abandoning his life's work.

Rhys spoke with Salon while on a break from filming Season 1's final episodes in downtown Brooklyn (where the show is shot) about what it's like to revisit the final years of the Cold War in his role as a KGB sleeper cell, as an adult, and as someone on American soil (the 38-year-old grew up in Wales), and describes, with affectionate bemusement, the way the young people on the set — from the young production assistants to the child actors who play his kids — perceive the drama as some long-ago chapter in history.

"The Americans" begins in 1981 — I was 10, and I remember that time so well, but it's fascinating to see the era anew through adult eyes. I think so many of us forget how acutely Americans felt the Russian paranoia.

Yeah, it’s something I remember vividly.

What did it look like as you were growing up in Wales.

Well, in a way it was kind of worse. The Cold War was as prevalent for us as well, but we were in striking distance of Russian nuclear weapons. So I think Britain always felt like slightly caught in the middle of it all. I remember this front where the USSR was and that was sort of the front line of it all, and East Berlin was incredibly close.

Your Welsh accent — now that's an act of ventriloquism, being a Welsh man playing a Russian pretending to be American.

Ha, my fake, phony accent. It’s sort of glorious. If, at any time, the accent slips, you can go, “Oh, you know, I’m not American.”

Philip is such an interesting character, because he takes all of his personas very much to heart — not least of which, as a husband and as a father. We’ve seen so many shows with cognitive dissonance, like “The Sopranos,” where you see a mobster devoted to his family — admittedly, a serial philanderer — and so it makes it easy to sympathize with them. But this is a fantastic conceit, asking Americans to sympathize with KGB spies. And it's impossible not to. We watch this very loving father and husband who’s trying to make a sham marriage work. There's so much more asked of you as an actor, playing a role in which your character is playing any number of roles, getting into a series of different characters.

Absolutely. It’s one of the most layered characters I've read in so many years, because they’re sort of – there’s duplicity in every moment that you play. If you’re pretending to be someone else, if you’re in your fake marriage, trying to make it real, second-guessing this other person – you know, you have enormous trust issues in a marriage bad enough, anyway. But I think add to that the possibility that she might be informing on him, they are pulled apart when it comes to where their future lies or what their beliefs are. I think you join the two of them when they’re figuring out – they  come to a point in their lives where they’re trying to figure out what it is that defines them. I think Philip’s at a point where he realizes he’s not defined by his job – his job isn’t what he is. To me, it was always the children. You find him in the first episode at a point when he realizes that it’s an unsustainable lifestyle, and that he has no interest in going back to Russia. He doesn’t want to take his children back to Russia – that seems unfeasible, unrealistic. And he realizes the only way to secure it all is to defect, the only way to secure their future and to make money out of it. And the woman he’s falling for, after being 15 years in a safe relationship, is, as I say, a polar opposite in his beliefs. But almost everything you do has this incredibly heightened conflict to it all, so it’s this mess we’re trying to figure out, really.

You feel his frustration; in a way, it would be easier if he defected. But we haven't gotten to know his story yet. We’ve gotten to know Elizabeth's back story a bit.

No, no, and I think that’s just been part of the way the series arc has gone. And I don’t know whether we will, or whether next season we will. You know, we’re coming soon to the end of the season.

The second season very well could focus on Philip. The previews for tonight's episode — Episode 6 — shows a real threat of exposure for him. Obviously, there's a limit to how exposed he'll be or the series would end, and we know it's been renewed. But I was thinking, just as with Tony Soprano, you want Philip and Elizabeth to elude capture, and that's what the whole point of the series is, to get the viewer to get absorbed by the tension and to cheer for the complicated antihero. Except this is based on actual historical events, these two are KGB, Americans' former mortal enemies, with whom we were constantly worried we'd be engaged in World War III. Now we're being asked — and it is very easy here to do so — to want the Jennings to get away with stealing secrets and kill people who get in their way and cheer against the FBI and the CIA.

It was a very clever conceit of the creators, to have the two main protagonists out of the KGB. As soon as you imbue them with these obviously very human problems, they become human, and those barriers end up getting broken down. And yes, you invite the audience to sort of root for them, and I think they’ve done so successfully. I don’t know if rethinking history is – you’re kind of rethinking the sort of indoctrination of Philip. You know? Our own country and our own governments or what have you, you can understand, and also, what I’ve thought a lot about is, you kind of think of these hard-liners as being very strongly opinionated young people who wanted to fight for the cause and they went. The reality was they were kids when they were recruited. When they were recruited, they were 18 years old, and you have no idea who you are at that age. And I think they were sort of forced into it, in a way, and it’s only now that – certainly, that’s certainly how I view it when we first meet Philip. He’s come to a tipping point in his life where he realizes it’s not for him, it’s not the definition of who he is or what he’s done or what he believes in. In a very primal way, his instinct at the forefront for him, is parenting, is securing his children’s future.

He's also a very protective husband, defending or trying to defend Elizabeth’s honor, any time anyone has laid a hand on her, as in last week's episode, when the businessman has beaten her during sex. This role has got to be so physically demanding: So many fight scenes. There are times you get absorbed in the domestic drama between Philip and Elizabeth that you forget what they do for a living, and it's in those moments you're reminded — suddenly you and Keri are wearing wigs and duking it out with somebody.

What a trip this must be for the kids: Everything about the show must seem so foreign to them. The technology, the décor, even the story itself. It must feel like one big world history lesson for them. What has it been like to watch this through their eyes?

Sort of afraid, really. I mean, it’s a lot of fun seeing them just mouths agog at the primitive level of technology at that time. You know, like, the VCR player, we have the TVs, the old telephones. They think it’s just hilarious and archaic and, rightly so, from another time. Because I remember all those – I remember Betamax and VHS and all of that.

It was an event when somebody got a new piece of technology. I remember the first family on our block to get a Betamax.

The same! And the first time you saw a movie in your own home, and the decision was yours for when you want to watch it. You didn’t have to go to a movie theater at a set time. It was this incredible luxury, and now the kids today, with the iPhones, watching movies on them whenever they want. So you realize the distance we’ve traveled.

For you and Keri, this can feel like a trip down memory lane, because you remember, but for them, this feels like "period drama."

When I think period drama, I think “Downton Abbey.”

Same! Hundreds of years, the Victorian Age. But there it is.

Is there something about Philip that especially resonates with you?

I love that his instincts, his reactions, his emotions are all very real and present. He’s not scared of showing when he gets upset. When his wife is hurt, although they’re still trying to define what their marriage is after all this time of pretending, but he’s incredibly protective of her and his children, and in the first episode when he goes and beats up the guy [who is leering at his young daughter] – those elements of him I relate to, I find easy to be that sort of – the quick trigger response that he has to things. I think he feels things deeply and quickly and isn’t afraid to show them at times. I don’t know if that’s him or me [laughs].