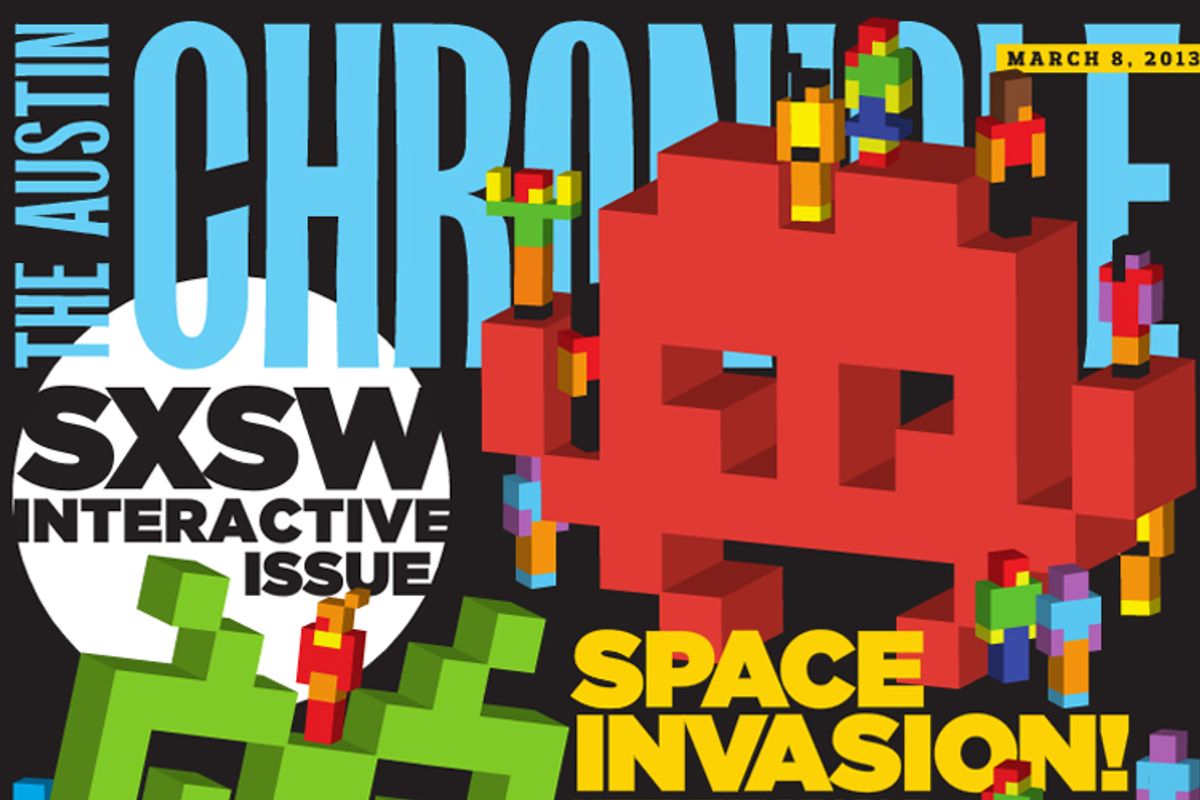 I was admiring the cowboy boots of the guy checking in ahead of me at the Motel 6 on I-35 in Austin, Texas, before I realized what he was talking about. The boots were beat up, scuffed, marked with years of toil. Nothing glamorous about them; pure shit-kicker, and beautiful for that. I heard their message  loud and clear: You're in Texas now, California boy.

Cowboy boots man was griping to the check-in clerk about how he hadn't been able to find any parking downtown that morning. And when the clerk confirmed that he would be staying only one night, he nodded, and laughed about how there was no way he would be paying the jacked up-weekend rates. More grumbling ensued about the pain-in-the-ass-ness delivered upon Austin this week by all the out-of-towners..

He turned to me, confused for a second, and then grinned. "Nah, this has been going on for years. Although it does keep getting bigger."

"Yeah, but it's my first time, so I'm clearly part of a growing problem."

He shrugged. To tell the truth, he appreciated all the cash injected into Austin by SXSW. More money for the city meant more money to pay him for construction jobs. So what if there was a little extra traffic in a city already busting at the gills?

If you drive north on I-35 from the Austin Convention Center, you will pass three Motel 6's before you reach the one where Mr. Cowboy Boots and I were chatting. The first three were all full-up when I looked for lodging two weeks ago, as was any hotel within walking distance of SXSW. In fact, in a sweet but painful exhibit of dynamic pricing in action, the price for a room for a night in any of those Motel 6's rose in direct correlation to how close the motel was to the city center. And don’t even get me started on what the supposedly generous souls using AirBnB to rent out their homes are charging per night this week. SXSW is the kind of place where the newest "sharing economy" apps try to make a big splash, and where you will hear a lot of promises about how the efficient resource allocation facilitated by sharing apps lowers costs for everyone. But as far as I could see, the cutting edge in room-sharing is just another opportunity to gouge whatever the market will bear when the moment is right.

Cue the disillusionment, even before the first keynote. As I was waiting for the traffic to die down enough on I-35 to make it feasible to think of driving downtown Friday morning, I happened to read a pretty good setup piece on SXSW in Verge, "At SXSW, the stunts get wilder every year — and more disappointing." In the story, one former Austin resident is quoted saying, "SXSW used to be a meeting of the minds, where people went and got ideas and created ideas, and companies would form from it," she said. "Now it's more showcasing these ideas that have already formed."

In other words, it's just another big public relations circle jerk. With a lot of traffic. (For what it's worth, the SXSW press suite offered free underwear and harmonicas, sponsored by GoToMeeting, for every visiting hack.)

This is, of course, not the kind of thing someone who is attending SXSW for the first time wants to hear. But it's also probably true. For veterans, nothing ever is as good or cool or fun as it was in those olden days when a small coterie of in-the-know early adopters banded together. I think the same complaint was probably made about Burning Man in only its second year of its existence. So it ever shall be.

But if there was one thing clear from my first few hours in Austin, from conversations with the rental car clerk at the airport to cowboy boots man at the Motel 6, or with the extravagantly bearded hipster at the excellent outdoor sausage and beer restaurant on Rainey Street helping me choose one out of 103 draft beers (wait, was that beard Austin's version of a Brooklyn-style adaption of true mountain-man grizzly-ness, or was it actual Texan authenticity?), it's that the 25,000 SXSW Interactive attendees who just descended on this town are here for more than just the chance for a "meeting of the minds." They are here to eat and drink and hang out and have a good time. The Internet economy is just an excuse!

It's Friday morning: From the sound of the highway through my motel door, it appears that the traffic may have lightened enough for me to make it downtown without spending half an hour in bumper to bumper traffic, and find some working Wi-Fi. Finally, it's time to hear what the geeks say for themselves.

(And yes, the Convention Center's Wi-Fi is awesome. Which says something, because I have never seen so many people simultaneously online in one place.)