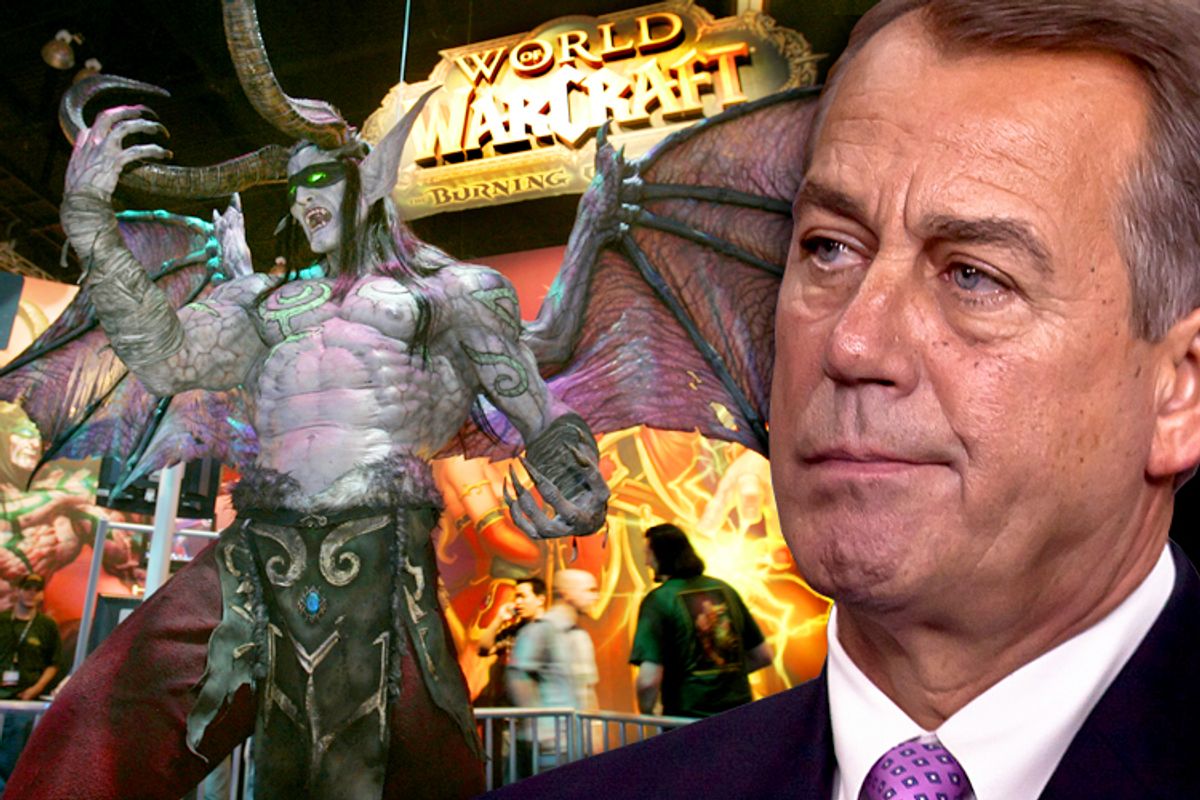 Not long ago, House Majority Whip Eric Cantor tweeted, “President Obama wants to raise your taxes so he can pay people $1.2 million to play World of Warcraft."

In assailing people "playing video games," the lawmakers were referring to a team of Ph.D. researchers and doctoral students who earned two National Science Foundation grants totaling $1.2 million for scientific study of the cognitive benefits of certain games to older people. Their statements were factually wrong, harmful to a proud American brand and exerted a chilling effect on legitimate and essential scientific research.

The facts lay out a different version of reality than the ones tweeted by politicians. North Carolina State University scientists found that playing "World of Warcraft" can improve cognitive function in older people who were having mental difficulties. The study did not cost $1,200,000, but only $5,000, not a penny of which came from federal tax dollars (it was paid for by the university).

Due to the promising WoW study, a team of researchers and doctoral students then earned the NSF grants for further scientific study of the already-proven cognitive benefits of games. It did not “pay people $1.2 million to play” games, and none of the federal government’s $1.2 million was spent studying WoW, but other games like Steven Spielberg’s puzzle game "Boom Blox" for the Nintendo Wii.

The most important point: Even if Boehner and Cantor were right and participants were paid to play "World of Warcraft" for legitimate scientific research, there would be nothing inherently wasteful or wrong about that. It is not rational to single out any medium as being inherently unworthy of study. What is the justification for this anti-game bias? Boehner and Cantor appear to be exploiting the fear of the relatively new medium of interactive entertainment for political gain.

Why alter the facts to falsely attack WoW, a game with imaginary violence, instead of attacking the game actually used in the taxpayer-funded study, the family-rated game "Boom Blox"? Is it a coincidence that this attack on WoW comes at a time during the renewed gun debate when these same politicians have begun a verbal barrage of misleading statements about games, including perpetuating the debunked myth that imaginary violence causes real violence?

For the record, there is nothing wrong with government dollars funding the study of games, even games with combat like "World of Warcraft." Further, there is nothing wrong with the government funding the creation of video games for health and education. Even in a time of deficits, we need far more government spending on video game research and development, not less. The last time the U.S. government ended its budget deficits and ran a surplus in the 1990s, we did so while significantly increasing research spending.

Science research returns far more money to taxpayers than it costs, and video game research has already proven its worth. Games are not only successful in education and training, but biotechnology games like "Foldit" are solving difficult medical problems in a fraction of the time taken by traditional scientific methods.

The study of video games for health is especially promising. Because games are inherently engaging, they have tremendous potential to support us in our compliance with our health regimens by adding an element of fun. Major medical research institutions all over the world are investing large sums of money into developing games as complementary interventions with fewer side effects. Will John Boehner target them next?

Condemning this breakthrough research as waste, and chilling U.S. government funding of game research will not prevent more lucrative breakthroughs in games for health; it will just ensure that the profits go to foreign nations rather than U.S. companies. After the recent slowdown in U.S. spending on science, foreign companies for the first time collected more than 50 percent of new U.S. patents.

The benefits of video games should be studied in all kinds of games, whether they are all-ages games like "Boom Blox" (as violent as knocking over toys), teen-rated games like "World of Warcraft" (no more violent than "Star Wars" movies) or violent games like "Call of Duty" (which studies show do not cause people to be violent). It may surprise some to know that scientific publications have reported that violent games have clear benefits, including improving attention, spatial reasoning and decision making. As for WoW, it is a great American product that employs large numbers of American workers. It is a highly social game that friends and families can play together to enjoy epic adventures and learn valuable real-world skills. Thanks to this research, we know it can also benefit our brains. The government should praise WoW instead of condemning it

Jobs in the video game field are usually well-paying and can’t be done by robots. But they can be taken away by other nations. Foreign governments are offering healthy tax breaks and large cash incentives to lure our game development companies to their shores, and many are also increasing their investments in games for health. What sense does it make for the U.S. government to push away U.S. game companies and U.S. game researchers? There are already too many areas where political controversy has chilled and censored scientifically sound research.

U.S. funding agencies need to resist this anti-game pressure and have the courage to fund video game research, which has already proven to be a extremely promising field of study. The U.S. military has spent large sums on video games to support the troops in areas like dealing with other cultures, reacting to ambushes, stress resilience and the fight against post-traumatic stress disorder and believes in its efficacy. The net result has been a significant return on the taxpayer’s investment on games, just as with all other kinds of science spending.

It’s time for politicians to stop the gratuitous attacks on video games (a retraction and clarification of the falsehoods would be nice, too). No one should make video games or science funding into a partisan issue. Remember, there are millions of video game players in the U.S. and we vote. We can easily determine who supports game research and who scapegoats video games. Because, you know, our cognitive functions are very strong. From playing all those video games.

Daniel Greenberg is a video game developer and the Chair of the International Game Developers Association’s Anti-Censorship and Social Issues Committee. He has worked on video games for health and education funded by the NSF and the NIH, including Earth Explorer, published by Apple. WoW publisher Activision/Blizzard is a repeat client, and though he did not work on WoW, he knows members of its team.