When pondering his legacy, we must examine his disconcerting role in the upheaval in Middle East and North Africa 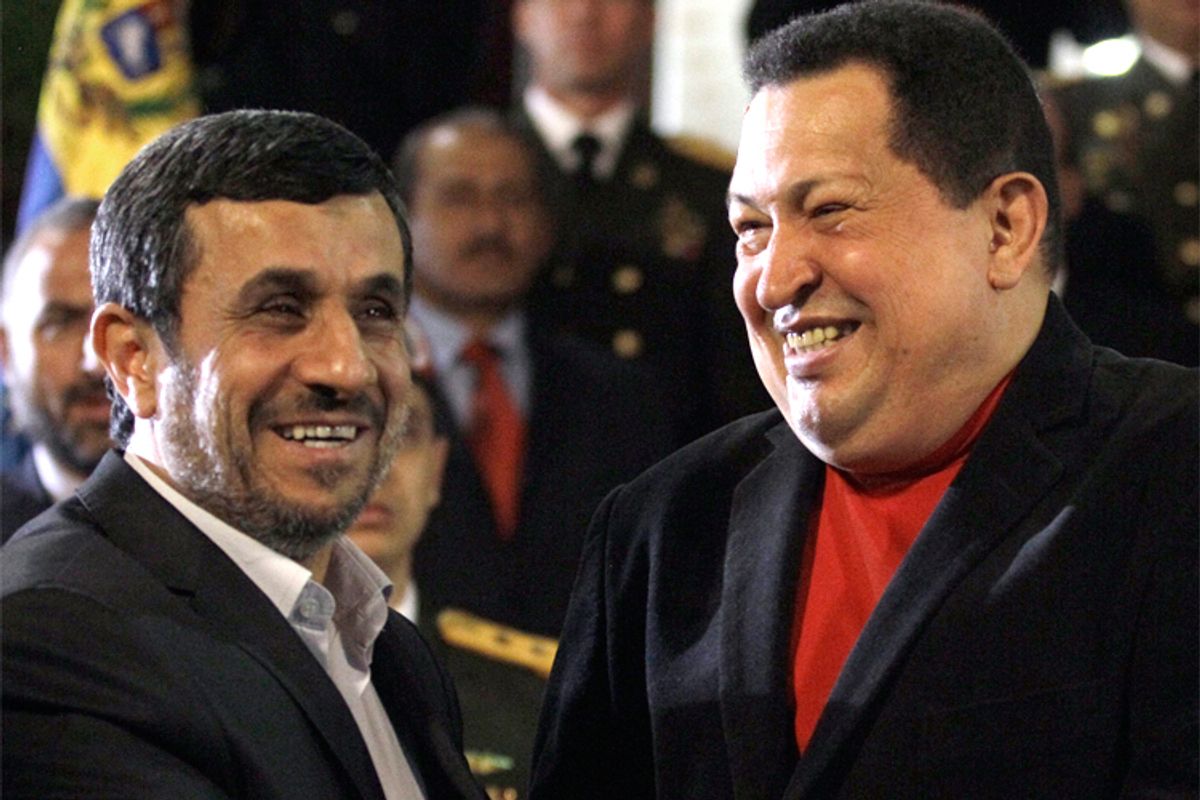 Most of the postmortem commentary on Hugo Chávez has focused on his domestic legacy in Venezuela, his wider regional legacy within Latin America, and what we might call his hemispheric legacy – his “special relationship” with the United States. And for good reason: these were the principal realms in which he operated during his 14 years as Venezuela’s president (1999-2013) and it is for his accomplishments in these domains that he will be remembered and the Chávez Era (it was, to be sure, an era) will be evaluated.

But there’s a less discussed dimension of the Chávez legacy that ought to be examined: his relations with the countries of the Middle East and North Africa, a story whose significance became more salient with the onset of the momentous changes the region has been undergoing over the last few years – not merely since the “Arab Spring” or Arab revolts starting at the end of 2010 but going back to the upheaval in Iran in the summer of 2009.

But first, let me be clear that I admire a great deal of what Chávez and his Bolivarian Revolution accomplished in Venezuela. As Mark Weisbrot of the Center for Economic and Policy Research points out, the Chávez government

reduced poverty by half and extreme poverty by 70 percent.  Millions of people also got access to health care for the first time, and access to education also increased sharply, with college enrollment doubling and free tuition for many. Eligibility for public pensions tripled.

And it’s significant that Chávez did all of this through the ballot, not the bullet: he was elected and re-elected repeatedly, and by wide margins. I’ve praised the experiments with alternatives to neoliberalism in Venezuela, suggesting that other movements around the world study and learn from them. I’ve even been taken to task for being too pro-Chávez.

It’s precisely because of these positive accomplishments that Chávez’s record on the Middle East and North Africa is so disconcerting.

Chávez had been an enthusiast of Mahmood Ahmadinejad since the latter became Iran’s president in 2005. In 2006, while Ahmadinejad presided over a massive escalation of repression against dissidents, trade unionists, and human rights activists in Iran, Chávez awarded him the “Order of the Liberator” medal, the highest honor Venezuela bestows on foreign dignitaries. In June of 2009, as millions of Iranians took to the streets to ask “Where Is My Vote?” Chávez was among the first world leaders to congratulate his ally in Tehran on his reelection, and the Venezuelan Foreign Ministry issued this statement:

The Bolivarian Government of Venezuela expresses its firm opposition to the vicious and unfounded campaign to discredit the institutions of the Islamic Republic of Iran, unleashed from outside, designed to roil the political climate of our brother country. From Venezuela, we denounce these acts of interference in the internal affairs of the Islamic Republic of Iran, while demanding an immediate halt to the maneuvers to threaten and destabilize the Islamic Revolution.

This provoked widespread dismay and appeals to Chávez from Iranians, many of whom sympathized with the ideals of the Bolivarian Revolution, to stop supporting their reactionary president. Those appeals, alas, went ignored, further damaging the standing of the Venezuelan leader among progressive Iranians.

“In Egypt, the situation is complicated,” Chávez pronounced during the Tahrir Square protests that brought down Egyptian dictator Hosni Mubarak. He remained conspicuously silent on the Battle of Cairo, one of the great democratic uprisings of recent times, remarking merely that “national sovereignty” should be respected.

But silent he was not as the Arab revolts spread to Libya and Syria: he spoke out emphatically in support of Muammar Qaddafi and Bashar Assad. Chávez had been chummy with the Libyan leader before the 2011 uprising against him: in 2009 he regaled Qaddafi with a replica of Simón Bolívar’s sword and awarded him the same ‘Order of the Liberator’ medal he’d bestowed on Ahmadinejad. “What Símon Bolívar is to the Venezuelan people,” Chávez declared, “Qaddafi is to the Libyan people.” As the Libyan revolt grew and Qaddafi went on a rampage of slaughter, Chávez was one of a handful of world leaders who stood by him: “[W]e do support the government of Libya.” That support, as one observer noted, was “politically costly and proved to be an embarrassment to many of Latin America’s erstwhile revolutionaries who now share a vision of a democratic future.”

“How can I not support Assad?” Chávez asked last year as the body count in Syria approached 60,000. While the regime bombed bread lines and hospitals, Chávez shipped upwards of 600,000 barrels of Venezuelan diesel to his ally in Damascus. Meanwhile, the Chávez-inspired Bolivarian Alliance for Latin America (ALBA) denounced a United Nations Human Rights Council resolution that condemned the Assad regime for the horrific massacre of over 100 noncombatants, including 49 children. The U.N. resolution, ALBA protested, was an attempt to “interfere in Syria's internal affairs.”

These international alliances raise troubling questions about Chávez’s judgment and legacy (a legacy that awaits, and deserves, a thorough historical reckoning along the lines of Perry Anderson’s magisterial retrospective on Brazil’s Lula), especially for those of us who do admire many of the Bolivarian Revolution’s accomplishments.

Some of Chávez’s defenders chalk these unsavory alliances up to realpolitik calculations that a Third World leader has no choice but to make in dealing with a global hegemon hell bent on undermining all alternatives to its dictates. But this only goes so far. Lula’s foreign policy involved lots of deals and alliances – the Brazilian-Turkish attempt to resolve the Iranian nuclear issue, for instance – but, unlike Chávez, he never defended the repressive domestic policies of the Islamic Republic or denounced Iran’s democratic movement.

A group of Iranian leftists who support the goals of the Bolivarian Revolution made this point in an open letter to Chávez. “To us,” the letter reads, “it is possible for the Venezuelan government to have close diplomatic and trade relations with the Iranian government without giving it political support—particularly where domestic policy is concerned. Above all, endorsing its labour policy is in complete contradiction with your own domestic policy.”

Dealing with ambiguity has never been a particular forte of the Left. Yet assessing the legacy of Hugo Chávez requires nothing so much as a sense of ambiguity. I thus find Bhaskar Sunkara’s observation that the Bolivarian Revolution contains “both authoritarian and democratic, demagogic and participatory” elements most refreshing. I know from personal conversations with countless progressives that ambivalence about Chávez, particularly on the international front, runs deep – but the critical conversation has yet to reflect that ambivalence.

Theorizing Chávez’s international relations – examining the ideological affinities between his left-wing populism and the right-wing populism of an Ahmadinejad’s, exploring patterns between his domestic and foreign policies, comparing his international dealings with those of other progressive leaders in the Global South – remains to be done. No complete reckoning with the legacy of this historic political figure can be complete without confronting these questions, thorny though they may be.

Danny Postel is the Associate Director of the Center for Middle East Studies at the University of Denver’s Josef Korbel School of International Studies. He is the author of Reading “Legitimation Crisis” in Tehran (2006) and the co-editor, with Nader Hashemi, of The People Reloaded: The Green Movement and the Struggle for Iran’s Future (2011).