Important questions on targeted killings were raised this week, and more remain. Progressives were nowhere 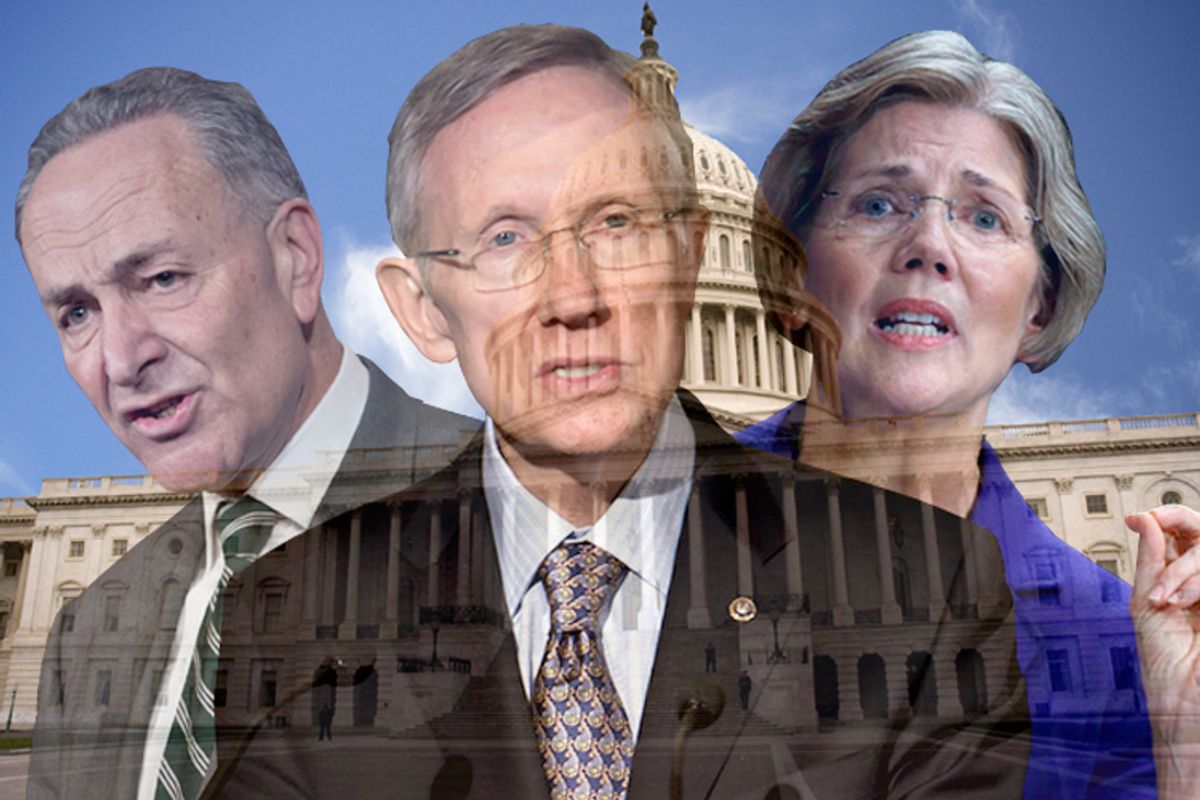 If you noticed that there was a lot of news this week in the Senate, but hardly any mention of Democrats, you weren't alone. By mid-afternoon Thursday, after a 12-hour filibuster by Sen. Rand Paul, John Brennan was confirmed to be the next CIA director by a vote of 63-34. The "nay" votes were clearly short of a successful challenge to Brennan’s confirmation (whose nomination to the same office was undermined four years ago).

Much of Paul’s protest centered on the White House’s refusal to answer where it stood on targeted killings. Although it broke no records, Paul’s filibuster met with telling widespread negative reactions on the parts of liberals and progressives. Democrats were virtually invisible, with one or two notable (and weak) exceptions, during Paul’s time on the floor.

Prior to Wednesday, Paul and others in the Senate asked over and over for confirmation that American citizens were not in danger of being killed on American soil. The question was itself hospitably narrow: There was no challenge to the legality of killing foreigners on American soil, to the kill list, to drone strikes on international soil, to the arbitrary (secretive, procedure-less) executions of foreigners deemed a threat.

Yet, the White House’s response was silence, evasion from the president himself, or circumspection. On Wednesday afternoon, Attorney General Eric Holder explicitly affirmed that “in extraordinary circumstances,” the president could indeed authorize drone strikes. One day later, Holder issued another answer, which was falsely framed as confirming the limits of the president’s ability to drone Americans on U.S. soil. In fact, Holder reiterated more precisely that the Obama administration reserved the right to kill Americans engaged in combat on American soil. White House press spokesman Jay Carney appeared to make Holder’s statement more definitive (watch at 00:20), stating that “The president has not and would not use drone strikes against American citizens on American soil.”

In reality, Holder responded negatively to a strictly limited question, namely, “Does the president have the authority to use a weaponized drone to kill an American not engaged in combat on American soil?” Given the untrustworthiness of the Obama administration in anything having to do with the Global War on Terror, Holder’s answer should not be reassuring to Americans. What does it mean to be “engaged in combat” on American soil? Does it mean protest? Dissent? Being Muslim and loud? Standing within 50 feet of the White House with a critical sign? In a world where the mainstream media refuses to be critical watchdogs and whistle-blowers are treasonous and betrayers of national security, Holder’s answer may have made Rand Paul happy. But the rest of us, especially if we are remotely critical, should be terrified.

Whether rejecting the constitutional rights of American citizens, kidnapping alleged terrorists from foreign soil, or treating captured “enemies” inhumanely, Holder’s supposed confirmation of the limits of the president’s authority to kill without accountability is a deeply unsettling unilateral and illegal expansion of political power.

As Glenn Greenwald pointed out well before Holder’s (consistent) responses,

[t]he idea that assassinations will be used only where capture is "infeasible" is a political choice, not a legal principle. If the president has the power to kill anyone he claims is an "enemy combatant" in this "war", including a US citizen, then there is no way to limit this power to situations where capture is infeasible.

Yet instead of expressing outrage, Democrats continued to acquiesce to the White House’s radical expansion of executive power. And they turned on Rand Paul, even though his objections should have been shared not just by liberals, but by everyone with even a passing respect for the rule of law.

So where’s the problem for progressives? Apparently, Paul’s question about killing Americans on American soil is deemed such a singular Tea Party-ish position that only two Democrats (Patrick Leahy and Jeff Merkley) and Independent Bernie Sanders joined Republican forces in challenging Brennan’s nomination.

Rather than challenge a Democratic administration in defense of constitutional principles that all citizens should insist be guaranteed, Democrats embraced party tribalism. As Kevin Gosztola pointed out, so-called progressives from Lawrence O’Donnell to Chris Matthews vilified the only politician who was asserting a -- limited, mild, patriotic -- challenge to the White House’s imperious expansion of unilateral authority. It was a challenge that every single Democrat, conservative, liberal or progressive should have been pushing for the last four years. Even those few, such as Sen. Ron Wyden, who exhibited some backbone, did so tepidly. After all, Wyden clearly stated that he would vote to confirm Brennan.

Apparently, it is bizarre to insist that the U.S. government’s power to kill should be limited. So much so that (Feet to the Fire!) liberals point to Paul’s endorsement of a 1905 right to contract case as a distraction reason to demonize him instead of supporting his stance on this issue. The most important take-away of Paul’s 12-hour filibuster for ThinkProgress.org’s Ian Millhiser was that Paul endorsed Lochner v. New York in his very same remarks about drones. Tea Party Libertarian Paul went so far as to — gasp — suggest that big government was a problem, or that the right to contract could have helped avoid Jim Crow and racism against African-Americans.

Paul’s speech also includes a somewhat rambling attempt to claim that Lochner helped “end Jim Crow,” a claim that would cause anyone with even a rudimentary understanding of civil rights history to scratch their head. Lochner was decided in 1905, and, while Paul is correct that the Lochner Era justices very occasionally struck down discriminatory laws, Jim Crow was still very much alive when Lochner was overruled in the 1930s. The Supreme Court decision that did the most to eradicate Jim Crow — Brown v. Board of Education — rested on the Constitution’s guarantee that no person shall be denied the “the equal protection of the laws,” not on some fabricated right to contract.

So … Rand Paul is a racist, according to Millhiser, who writes as if the “fabricated right to contract” was a bizarre, unusual, far-right idea that existed in a vacuum. But the unfettered "right to contract" is consistent with a classic free-market framework later articulated by Milton Friedman. Friedman argued that racism could be eroded by adhering to unregulated markets. Indeed, the right to contract is a staple of the Chicago School of Economics, which includes notables such as Richard Posner and Austan Goolsbee, Obama’s economic policy adviser and chairman of the Council of Economic Advisors. I’m not endorsing free markets, but it’s hardly an unusual reading for many, many mainstream economists. In fact, your average Ivy League college-going child is probably going to take a class with one of them soon, if they haven’t already.

Similar free-market principles are the basis of challenging the hyper-regulated and hyper-punitive War on Drugs, which is disproportionately directed toward minority populations. I venture to guess that this is the basis of Rand’s father, Rep. Ron Paul’s long-standing objections to the Drug War as well. It’s hardly outlandish to believe that in some instances, pushing back against the authority of the state would work in favor of vulnerable populations. Again, I don’t endorse free markets; I’m only suggesting that we need a more complicated view of Paul’s position than Democrats are willing to acknowledge.

Is Paul a racist? Here’s a better question: Is Paul any more racist in his economic and drug policy endorsements than the White House in its policies of kill lists, targeted killings, drone strikes, TSA no-fly and watch lists, Department of Homeland Security’s Secure Communities program or “See Something, Say Something” policy? Is Rand Paul more of a threat to black and brown populations (American or foreign) than the current administration, which deported more than 1.5 million migrants during its first term and separated tens of thousands of migrant parents from their children? Is Rand Paul more of a threat to our safety than the current administration?

Despite the White House’s defiant disregard of procedure, transparency or accountability, the Democrats disassociated themselves from an important strategic ally -- a libertarian who is the only one asking the questions that progressives, Occupy protesters, political dissenters, Muslims, Arab Americans, African-Americans, Latinos, South Asians and undocumented migrants want an answer to: Will the president claim and exercise the power to kill one of us at his and his advisers’ discretion?

Democrats should have participated in Paul’s filibuster until the answer they received was an unconditional “no” to the question of targeted killings of Americans on American soil. There’s much more to be demanded of this administration, but support for Paul’s filibuster could have been a good place to start. And it should have been a no-brainer. But rather than forming a tactical alliance -- no one was asking Democrats to convert to Tea Partyism -- Democrats relinquished yet another chance to do their jobs: to question, challenge and push back on the Obama administration’s unceasing quest for power.