Top 5 investigative videos of the week: When drones attack!

From Vice's "Inside North Korea" to "Attack of the Drones," a look at the best YouTube has to offer 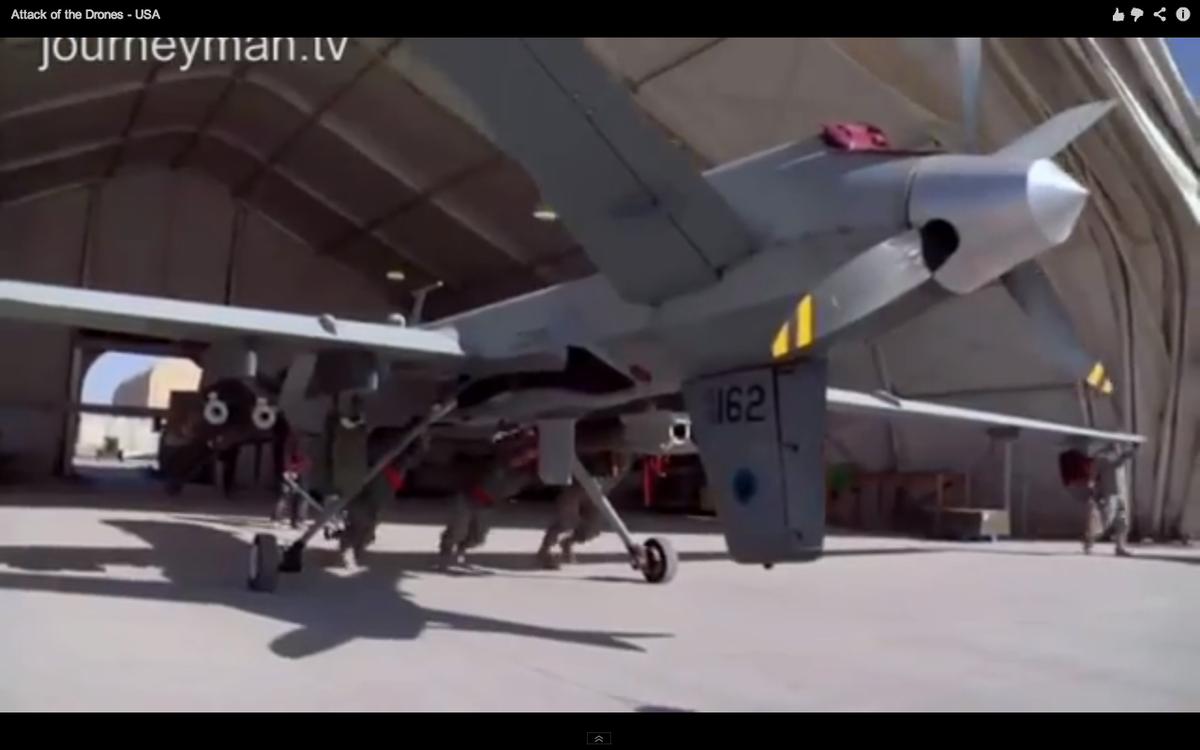 Scene still from "Attack of the Clones"
--

In the news spotlight this week: the improbable juxtaposition of drones, women’s rights, wealth disparity and Dennis Rodman in North Korea.

To help make sense of it all, the editors of The I Files have compiled a list of the best investigative and feature news videos relevant to this week’s headlines. The I Files is an alternative news source, managed by the Center for Investigative Reporting, that showcases revealing video investigations and innovative documentaries you might otherwise overlook.

If you enjoy these videos, please take a moment to subscribe to The I Files for the latest stories. It’s completely free. Your computer will thank you. This week's dramatic new investigation links former General David Petraeus to U.S. advisers who ran brutal interrogation centers in Iraq, apparently with the implicit knowledge of the U.S. administration. “James Steele: America’s Mystery Man in Iraq”
details how two Americans hired by Petraeus oversaw the torture of thousands of suspected insurgents, ultimately exacerbating sectarian violence in the country. This 15-month joint investigation by The Guardian and BBC Arabic was kick-started by information gleaned from the classified military information released through WikiLeaks. It’s a disturbing and illuminating ride. Steele, the American accused of spearheading the torture centers, now lives in Texas and lectures on counterinsurgency tactics.

“Attack of the Drones,” Vincent Verweij and Fred Sengers

Feeling a little nervous – or furious – about drones?

“Attack of the Drones” probably won’t temper any paranoia that you might be experiencing, but it does offer a glimpse into a strange, brave new world where military pilots can assassinate targets in Afghanistan at lunchtime and go home to have dinner with their families in New Mexico. The film asks whether the ability to kill so easily and at such a great remove has the potential of turning war into a video game. This video features some especially creepy-looking drones. Take a look at the four-legged, headless, dog-like robot jogging along a beach, looking disturbingly lifelike.

This was also the week when former Chicago Bulls star Dennis “The Worm” Rodman was transformed suddenly into the most influential diplomat on the planet as he became the highest-profile American to meet with North Korea’s famously secretive and enigmatic new leader, Kim Jong-un. Rodman was recruited by Vice TV for its new HBO series to participate in what it calls "basketball diplomacy,” which in this case involved a handful of Harlem Globetrotters and the highest echelons of North Korea’s ruling cadre.

The Rodman episode won’t air for several months, but in the meantime, you can sample the wonders of surreal communist propaganda in Vice’s three-part series, “Inside North Korea.” Originally broadcast in 2008, the film offers a rare and irreverent glimpse into a country most Americans have never seen. Vice co-founder and correspondent Shane Smith is careful to point out that the entire trip was painstakingly orchestrated by his North Korean minders and that he and his crew could film only what their government guides and bodyguards allowed. But even watching the process of the stage-managed media tour is illustrative, as Smith dines alone in vast banquet halls devoid of any other tourists and attempts to engage in his own form of off-key karaoke diplomacy. In the end, the film says quite a bit about how North Koreans view themselves and the image they hope to show the world. It’s hilarious, bizarre and heartbreaking, given what you know is occurring just off camera.

Of course, now that North Korea has announced it is cancelling all nonaggression agreements with South Korea, eccentric dictatorial behavior and Dennis Rodman diplomacy are starting to look a little less funny.

March 8 was International Women’s Day and a good time to celebrate one of the last remaining matriarchal societies in the world. “The Women’s Kingdom” travels to a remote enclave in southwestern China where the women of the Mosuo tribe carry on the family name, inherit the property and control the money. The Mosuo practice what they call “walking marriages,” in which women are free to determine the scope of their relationships on a day-to-day basis: A woman might invite a man to spend the night, but he is obligated to leave her home the next morning. Perhaps inevitably, the Mosuo have become a popular destination for tourists looking for a taste of what they see as a free love culture. This excerpt from a short film made in 2006 introduces viewers to one particularly outspoken member of the Mosuo who definitely knows how to put salacious tourists in their place.

This animation lays out in simple but highly relatable graphics one man’s take on the distribution of wealth in America. Less a classic investigation and more an academic primer with an edge, this video takes information that already was widely available and adds a personal element as the narrator struggles to come to terms not only with inequities of wealth distribution in the U.S., but also with how Americans see themselves and understand their own place in the larger economy.

While the video was uploaded a few months ago, it went viral only earlier this week, just in time for the sequester, garnering more than 3 million views to date. I was curious about the person behind the video who clearly struck a nerve. The piece was created by a YouTube user who uses the handle “politizane.” This is the only video uploaded by that user to date. I have reached out to this person for some more info, but no response yet. The creator remains a mystery for now.