Naomi Safran-Hon's paintings, currently at Volta NY, are far from the traditional definition of the medium 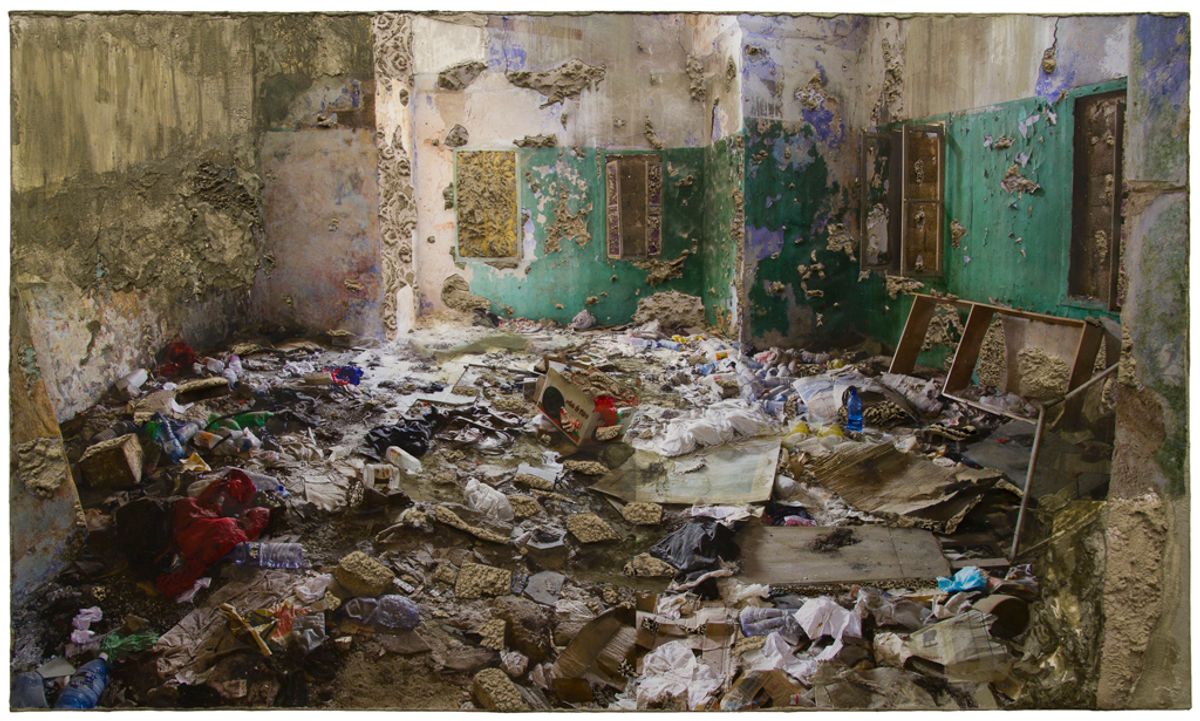 A bit more than a year ago, Naomi Safran-Hon opened her studio to the public as part of the Brooklyn Museum's Go  community-curated project and was worried that no one would show up. The 29-year old Safran-Hon was one of the 1,708 artists who participated, and in the end, she was chosen as one of the five winning artists to exhibit her work at the Brooklyn Museum. Visiting her studio in Crown Heights, I was not surprised that a large number of people who showed up voted for her work, which combines cement and lace and possesses a haunting quality that forces you to linger in front of her paintings.

Although technically Safran-Hon is a painter, her process is far from the traditional definition of the medium. First, she takes a photograph and mounts it on canvas, after which she paints on and cuts holes in it. She then stretches lace along the back of the canvas and pushes cement through it. “I think of my lace as my brush and my color palette,” she explains. “It’s not only the color but also the pattern which determines the shape of the cement that I push through the back of the canvas.”

The contrasts between cement and lace and between the paintings and the photographs evoke a sense of displacement. In many of the pieces, an abandoned and dilapidated house sits with layers of paint peeling off. The inside of the building is filled with trash and rocks that cover the floor. Human figures seldom appear, and their absence adds to the feeling of a lost civilization. Although Safran-Hon’s art is open-ended enough to invite the viewer to tap into his own past and history, for her, the pieces express a personal realization of how much she is defined by her home and her criticisms of its politics.

While preparing for her current exhibition at Volta NY, an art fair comprised of solo artists’ projects, Safran-Hon remembered how she started taking photos in her home country. Growing up in Israel, she took photographs of the enormous cement blocks of the Israeli separation barrier, the refugee camps, and the abandoned homes of Arabs who were forced to evacuate in 1948 when the state of Israel was established. When she was 18, she refused to enlist in mandatory army service on grounds of conscience. Instead, she volunteered with the Sherut Leumi, Hebrew for “National Service,” which offers an option for those who cannot or do not wish to serve in the Israel Defense Forces.

Throughout her studies at Brandeis and Yale Universities, Safran-Hon tried to break the boundaries between photography and painting by printing the black-and-white photos she took in Israel on canvas. “A neighbor of mine, who is a sculptor, gave me some cement, and I fell in love with it,” she recalls. Although she felt so comfortable with the material, it took her a while to figure what to do with it. Initially she created gray squares on canvas, cardboard, and paper. Her classmates described her as “Robert Ryman in gray,” but she objected to the comparison. “I do love the minimalists” she explains. “But this is not about art for me, but about life, about politics, about where I come from, about what I miss. It’s not just cement.”

She wanted the cement to look different and started experimenting by pushing it through window screens and kitchen supplies. “I usually don’t go to traditional art stores,” she says, laughing. The “winning combination” of cement with lace came after she moved to New York City, when a friend convinced her to go to the store Mood to purchase fabrics. “When I saw the lace, it was like an ‘oh my God’ moment,” she remembers. “It had beautiful patterns and holes, and I could push cement through it.“

Safran-Hon’s use of lace started a conversation about domesticity between her and her peers. “I had to look up the word domesticity in the dictionary,” she admits. “I knew what domestic meant, but I didn’t understand it in the context of what they were saying. It turned out they meant home, that these materials are bringing the feeling of home.” This concept is exactly what she wanted to convey, even though she herself didn’t know it at the time. “In the studio you make visual and material decisions, and it takes you a while to unwrap them, to understand their meaning and why they work conceptually,” she says. “With the lace it was a material choice, and then I had to think ‘what does it mean?’ I love this concept of domesticity. It’s about this material that is brutal, hard, and stiff invading this domestic space. This is exactly Israel.”

Although she hopes her work is not didactic, Safran-Hon does want to express her ideas about justice in the Israeli-Palestinian conflict. As an Israeli, she received a patriotic education, but her ideology has changed over the years. “I went through a whole journey of finding out about the history of the place and reading the Palestinians’ narrative.” Through her art, she hopes to open people up to different points of view. “If ideology is like a house and I come pounding on the door, people who don’t share the same views as me will not let me in, they will just guard it more,” she explains.

“But if I can plant seeds of doubt inside the house, then that person can nurture those seeds. They grow into a tree and break down the house from inside. Eventually they replace the house.”

Naomi Safran-Hon’s work is on view at the booth of Slag Gallery at Volta NY (82 Mercer Street, Soho, Manhattan), which runs through March 10.