Michael Morton and Cynthia May Chessman got married this weekend 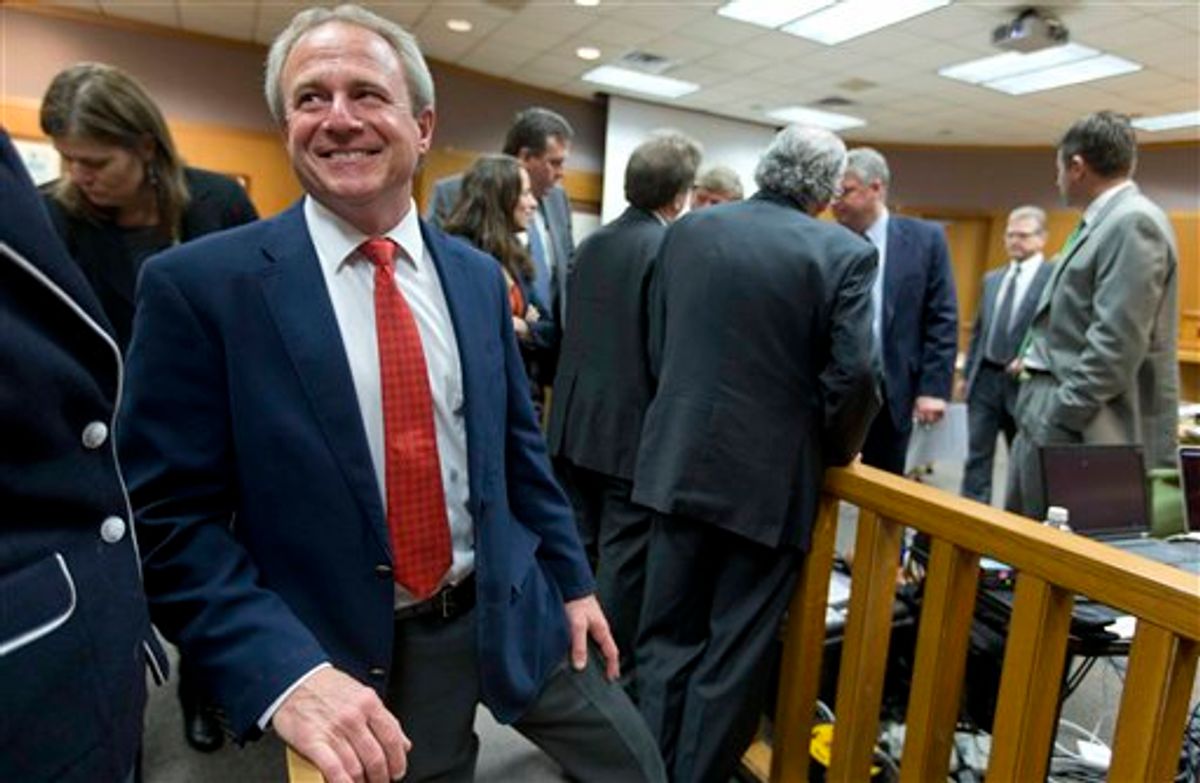 Michael Morton looks on as he jokes with a friend during a break inside of the court room on the third day of the inquiry into former Williamson County district attorney Ken Anderson. (AP/Statesman.com, Ricardo B. Brazziell, Pool)
--

After he was falsely convicted of murdering his wife, Michael Morton wasted away in prison for almost 25 years. When he got out in 2011, he was ready to start his life again, but he hadn't planned for romance to factor in. That quickly changed. This weekend he married Cynthia May Chessman who asked him out for coffee after hearing him speak in church, the New York Times reported:

In January 2012, he was invited to speak at First Baptist Church Liberty City, which he and his parents had been attending since his release. At the church that night, Mr. Morton spoke of his spiritual journey — one night in 2001 in his cell, he said, he felt the presence of God bathing him in a golden light — and he told the audience that if anyone wanted to learn more about prison life, he would meet for a cup of coffee.

Ms. Chessman, a member of the church, was there that night. “I was actually working in the sound booth, so I was paying real close attention to everything he was saying,” she said. “As he was talking, he said some things that just really rang common with me: that we had both been in a kind of rock-bottom place and needing the Lord to show us something.”

It's a good thing Chessman managed to steel herself; Morton was struggling with conveniences like credit card machines, and was not ready for the rigors of the modern dating swirl. “I’d been locked up for a good while, and even in my previous life I’d never been asked out on a date,” he said. “Coffee dates are kind of a new phenomenon. I literally kind of scratched my head when she asked. I said, ‘Well, O.K.’ ”

Ms. Chessman did not find Mr. Morton angry and resentful. “I’ve marveled the whole time that I’ve known him at the lack of bitterness,” she said.

Mr. Morton was cautious with this new relationship. He had known of parolees who had married within six months of getting out and divorced within 18 months. He had never considered remarrying, and now that he was out of prison, he did not want to make a mistake by rushing into love. But as time went on, he warmed to her, and to ordinary life.

Pamela Colloff of Texas Monthly wrote a landmark article about the travesty of justice that sent Morton to prison and how a non-profit called The Innocence Project used DNA evidence to win his freedom. It's well worth a read.