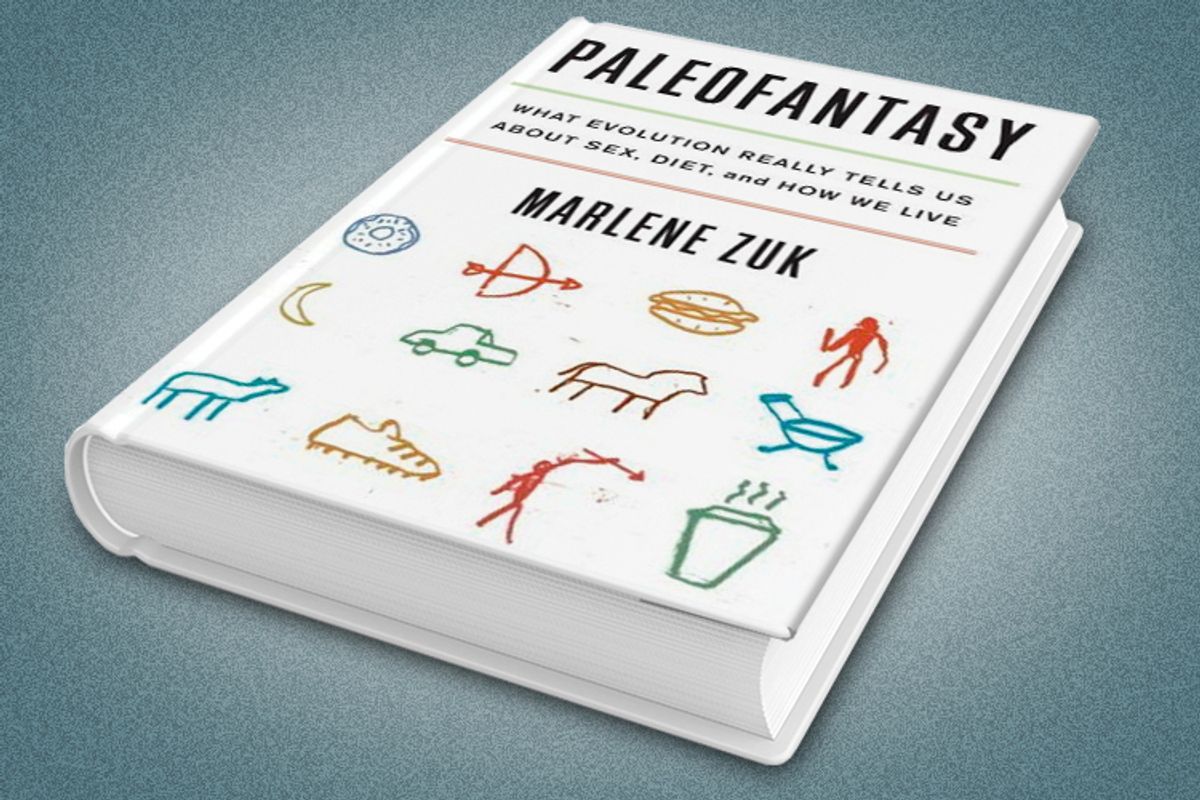 Four years ago, biology professor Marlene Zuk was attending a conference on evolution and diseases of modern environments. She sat in on a presentation by Loren Cordain, author of "The Paleo Diet" and a leading guru of the current craze for emulating the lifestyles of our Stone-Age ancestors. Cordain pronounced several foods (bread, rice, potatoes) to be the cause of a fatal condition in people carrying certain genes. Intrigued, Zuk stood up and asked Cordain why this genetic inability to digest so many common foods had persisted. "Surely it would have been selected out of the population," she suggested.

Cordain, who has a Ph.D in exercise physiology, assured Zuk that human beings had not had time to adapt to foods that only became staples with the advent of agriculture. "It's only been ten thousand years," he explained. Zuk's response: "Plenty of time." He looked at her blankly, and she repeated: "Plenty of time." Zuk goes on to write, "we never resolved our disagreement."

That's not, strictly speaking, true. Consider "Paleofantasy: What Evolution Really Tells Us About Sex, Diet and How We Live," a conclusive refutation of Cordain's quixotic, if widespread, view of human evolution, along with many other misconceptions. Zuk -- who has a puckish humor (she describes one puffy-lipped Nicaraguan fish as "the Angelina Jolie of cichlids") and a history of studying evolution, ecology and behavior -- found herself bemused by how the object of her research has been portrayed in various media and subcultures. She cruised the New York Times' health blog and sites like cavemanforum.com, collecting half-baked interpretations of evolutionary "facts" and eccentric theories ranging from the repudiation of eyeglasses to the belief that carbs can make one's nose "more round."

Although she writes, "I would not dream of denying the evolutionary heritage present in our bodies," Zuk briskly dismisses as simply "wrong" many common notions about that heritage. These errors fall into two large categories: misunderstandings about how evolution works and unfounded assumptions about how paleolithic humans lived. The first area is her speciality, and "Paleofantasy" offers a lively, lucid illustration of the intricacies of this all-important natural process. When it comes to the latter category, the anthropological aspect of the problem, Zuk treads more gingerly. Not only is this not her own field, but, as she observes, it is "ground often marked by acrimony and rancor" among the specialists themselves.

It is striking how fixated on the alleged behavior of our hunting-and-foraging forbearers some educated inhabitants of the developed world have become. Among the most obsessed are those who insist, as Zuk summarizes, that "our bodies and minds evolved under a particular set of circumstances, and in changing those circumstances without allowing our bodies time to evolve in response, we have wreaked the havoc that is modern life." Not only would we be happier and healthier if we lived like "cavemen," this philosophy dictates, but "we are good at things we had to do back in the Pleistocene ... and bad at things we didn't."

The most persuasive argument Zuk marshals against such views has to do with the potential for relatively rapid evolution, major changes that can appear over a time as short as, or even shorter than, the 10,000 years Cordain scoffed at. There are plenty of examples of this in humans and other species. In one astonishing case, a type of cricket Zuk studied, when transplanted from its original habitat to Hawaii, became almost entirely silent in the course of a mere five years. (A parasitical fly used the insects' sounds to locate hosts.) This was all the more remarkable because audible leg-rubbing was the crickets' main way of attracting mates, literally the raison d'etre of male crickets. The Hawaiian crickets constitute "one of the fastest cases of evolution in the wild, taking not hundreds or thousands of generations, but a mere handful," Zuk writes. Adjusted to human years, that amounts to "only a few centuries."

There are human examples, as well, such as "lactase persistence" (the ability in adults to digest the sugar in cow's milk), a trait possessed by about 35 percent of the world's population -- and growing, since the gene determining it is dominant. Geneticists estimate that this ability emerged anywhere from 2200 to 20,000 years ago, but since the habit of drinking cow's milk presumably arose after cattle were domesticated around 7000 years ago, the more recent dates are the most likely. In a similar, if nondietary, example, "Blue eyes were virtually unknown as little as 6000 to 10,000 years ago," while now they are quite common. A lot can change in 10,000 years.

Zuk detects an unspoken, barely formed assumption that humanity essentially stopped evolving in the Stone Age and that our bodies are "stuck" in a state that was perfectly adapted to survive in the paleolithic environment. Sometimes you hear that the intervention of "culture" has halted the process of natural selection. This, "Paleofantasy" points out, flies in the face of facts. Living things are always and continuously in the process of adapting to the changing conditions of their environment, and the emergence of lactase persistence indicates that culture (in this case, the practice of keeping livestock for meat and hides) simply becomes another one of those conditions.

For this reason, generalizations about the typical hunter-gatherer lifestyle are spurious; it doesn't exist. With respect to what people ate (especially how much meat), the only safe assumption was "whatever they could get," something that to this day varies greatly depending on where they live. Recently, researchers discovered evidence that people in Europe were grinding and cooking grain (a paleo-diet bugaboo) as far back as 30,000 years ago, even if they weren't actually cultivating it. "A strong body of evidence," Zuk writes, "points to many changes in our genome since humans spread across the planet and developed agriculture, making it difficult at best to point to a single way of eating to which we were, and remain, best suited."

Social and family relationships, too, vary greatly. But to draw conclusions about ancestral hunter-gatherers by examining diverse forager communities existing now, as some anthropologists do, is dubious in itself. Tribal people, too, have had tens of thousands of years to evolve. And unlike paleolithic hunter-gatherers, they live on the margins of developed societies and are almost always affected by them in some way.

Furthermore, the fossil record of the Stone Age is so small and necessarily incomplete that its ability to tell us about paleolithic society is severely limited. Consider this: For all we know, the first tools were not stone implements but woven slings designed to allow a mother to carry an infant while foraging; it's just that stone happens to survive longer than fibers.

Why are we so intent on establishing how paleolithic people ate, exercised, coupled up and raised their kids? That's a question Zuk considers only in passing, but she hits the nail pretty solidly on the head: "We have a regrettable tendency to see what we want to see and rationalize what we already want to do. That often means that if we can think of a way in which a behavior, whether it is eating junk food or having an affair, might have been beneficial in an ancestral environment, we feel vindicated, or at least justified." Even if we wanted to live like cavemen, Zuk points out (noting that the desire to do so somehow never seems to extend to moving into mud huts), we couldn't. In reality, we don't have their bodies, and don't live in their world. Even the animals and plants we eat have changed beyond recognition from their paleolithic ancestors. It turns out we're stuck being us.