Historically, women have had lower rates of addiction than men. But empowerment can come with a steep price 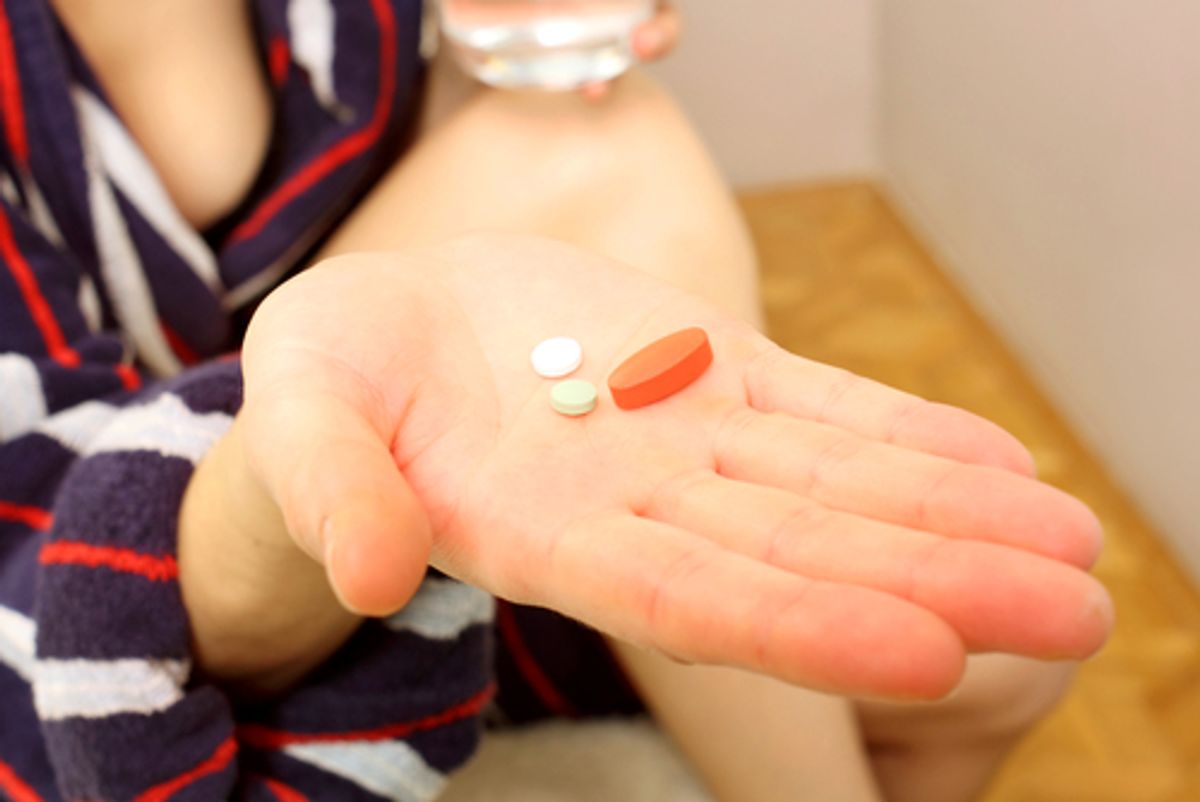 The worse women have it, the better off they are. This is the lesson we might draw from looking at one (and only one) global trend: addiction. Worldwide, women have always had lower rates of drug and alcohol use and dependence than men. Butas women’s access to opportunities grows along with a nation’s affluence, this gender gap begins to close. In fact, just as women often outstrip men in the classroom and office if given the chance, they have already forged ahead in the abuse of certain substances. It may not be the most celebratory way to mark International Women's Day (March 8), but the fact is, equal rights have their penalties.

In the US about 7% to 12% of women are dependent on alcohol—about two-thirds of men’s rate (20%). This gender gap is one of the smallest in the world, exceeded only by that in some European nations, where young women’s use of drugs is over 70% of men’s. By contrast, the gap in the developing world is much larger. In India, Pakistan and Indonesia, for example, women’s drug use is less than 10% of men’s. In Brazil and Argentina, women's use is 33% of men's. But as economic powerhouses like India and Brazil expand their middle class, they are also likely to assume other traits of developed nations: Rates of drug and alcohol use will rise across the board—but most of all for women.

The gender gap has been shrinking since the '70s as the stigma against women drinking (and abusing) alcohol has decreased while their access to booze has increased. Over the 20th century, smoking and drinking rates saw a gradual but steady rise among women—as women first in the upper class, next in the middle class, and finally in the lower class took up these habits. Affluence granted women more freedom and leisure time, but the rise in mass advertising of these products in after World War II also played a role.

Susan E. Foster, vice president and director of policy research and analysis at the National Center on Addiction and Substance Abuse (CASA) at Columbia University, notes that the rates of addiction accelerated in the ‘70s and ‘80s; since then rates have fallen for both sexes, but less for women, effectively diminishing the gender gap. The great wave of feminism emerging from the cultural revolution in the late ‘60s shattered traditions restricting female social roles and liberating women to participate in the male world. They were now able to work and drink with the boys.

Not so in the developing world, where the gender gap remains wide and wider. (The one exception is among sex workers, who have high addiction rates.) The second-class status of women accounts for this extreme difference. Throughout the Arab world and Southeast Asia, women’s roles are primarily within the home as wives and mothers. The sexes are, to varying extents, segregated, and public spaces are dominated by men, with bars, for example, off limits to women. Men typically control the finances, leaving women with few means to purchase illicit substances. In addition, there is often less education around addiction in developing countries, leading to greater stigma for addicts. Women are more heavily affected by this stigma.

As fast-developing nations, fueled by economies growing at double-digit rates, become global forces, substance use and addiction rates increase for both sexes. In South Africa, men are twice as likely as women to use illicit drugs (and 10 times as likely to use pot.) Expansions in systems of transportation and communications, and the establishment of an advanced banking structure, facilitate the illicit trafficking of many commodities, including drugs. This process is even more prevalent in China, where unprecedented economic growth has created a rapid rise in drug abuse rates for both men and women. The influx of people into China’s urban centers is expected to more than triple in this decade alone, with the majority of these new arrivals aged 15 to 35. They will face both the stresses of an industrial lifestyle and the vastly increased availability of both illicit drugs and alcohol. The current addiction gender gap—only 16% of registered drug addicts in China are female—is set for accelerated narrowing.

In Russia, fully 2% of its 212 million population are intravenous opiate drug users. Although Russia has the world’s highest rate of alcoholism—20% are women—its social problems caused by heroin, including crime and HIV, now overshadow those of alcohol abuse. Although estimates are hard to come by, experts report that the proportion of women arrested for drug-related offenses has risen every year since 2005.

Although women in wealthier countries can belly up to the bar without stigma, the stigma against female addicts remains considerable. This shaming is most intense for women who are mothers—in rich and poor nations alike. This situation may act as a check on addiction among mothers, but it also presents severe obstacles to women who abuse drugs and alcohol seeking recovery. Women are less likely than men to enter treatment, according to a UN report, citing “responsibility for children, lack of access to child care services, and society’s punitive attitude toward substance abuse by women, especially as child bearers.”

The harm of this double standard is intensified by the fact that women are actually more susceptible to alcoholism than men. In general, women’s use escalates more rapidly to addiction, and they are at greater risk for relapse. CASA's Foster notes that when using the same amount as (or less than) men, important differences in women’s physical make-up—their lower metabolism as well as a higher fat-to-water ratio—cause alcohol and drugs to remain in the body longer, increasing their vulnerability not only to dependence but to liver and brain damage.

Yet there is one notable exception in the gender gap, one particular type of substance that women have the dubious honor of using, abusing and getting addicted to at a much greater rate than men: tranquilizers (mainly benzodiazepines and hypnotics). In fact, the difference is stark; women are almost twice as likely as men in South America and Europe to have ever used sedatives and to use them habitually. (This “reverse” gap closes with age because most people stop using all substances as they get older, with rates very low among both sexes aged 65 or older.)

Why? Mental health conditions and diagnoses are key. Women in the US have higher rates of mental illness. They are 70% more likely than men to have depression and twice as likely to have anxiety-related disorders. Globally, women report a higher incidence of mental illness than men, though recent WHO statistics reveal that it is more affluent countries that have the highest rates of depression.

In the developed world, where depression and anxiety are prevalent, so are addictive sedative and tranquilizers. “In the US, a woman is almost 50% more likely to walk out of a doctor’s office with a prescription for a controlled drug than a man,” Foster says. (This is true even after adjusting for diagnosis.) About 25% of all US women are currently taking a medication for mental illness. An estimated 4 million abuse psychoactive drugs (sedatives, tranquilizers and stimulants). This prevalence has a long history, back through Mother’s Little Helper (Valium) in the ‘60s and ‘70s to the Victorian era, when women were treated for “the vapors,” or “female hysteria,” with a “fainting couch,” special baths and “pelvic massage,” during which doctors stimulated the genitals to orgasm.

Nora Volkow, director of the National Institute on Drug Abuse (NIDA), says in an interview broadcast by the National Institute of Health: “[A UN report on global health found that] more than one-third of females who have tried tranquilizers and sedatives once become regular [monthly] users, whereas in general less than 10% of [women] drug users develop into regular users of other drugs.” The same trend holds in both European and South American countries. The sedative effects of tranquilizers appear to hold a greater appeal to women, in part because of their higher rates of anxiety; at the same time, this particular class of drugs does not follow the normal attrition rate of other prescription psychoactive drugs.

The diseases of addiction and mental illness have long been known to reinforce each other. You drink because you’re depressed or anxious, and drinking, in turn, worsens the problem. What’s unprecedented is the new avenue to addiction that these anti-anxiety (and anti-depressant and anti-pain) pills have opened, with “special” access for women.

Depression and anxiety, like addiction, are widely viewed as diseases of affluence, similar to obesity. They exist where social and economic realities allow for it. (US women are 26 times more likely than South African women to use tranquilizers.) In the developed world, social and economic realities have also allowed increased opportunities for women—for example, adding full employment to their work as homemakers. The irony of affluence—money can’t buy happiness—cuts deeper for women: As access to equal opportunity grows and the gender gap closes, we might wish that equality did not extend to access to self-medication and its opportunity for addiction. But there's no turning back the clock.