Sheryl Sandberg tells Salon: I was wrong about women

The Facebook exec talks to us about running for office, picking a partner and how she's evolved on feminism 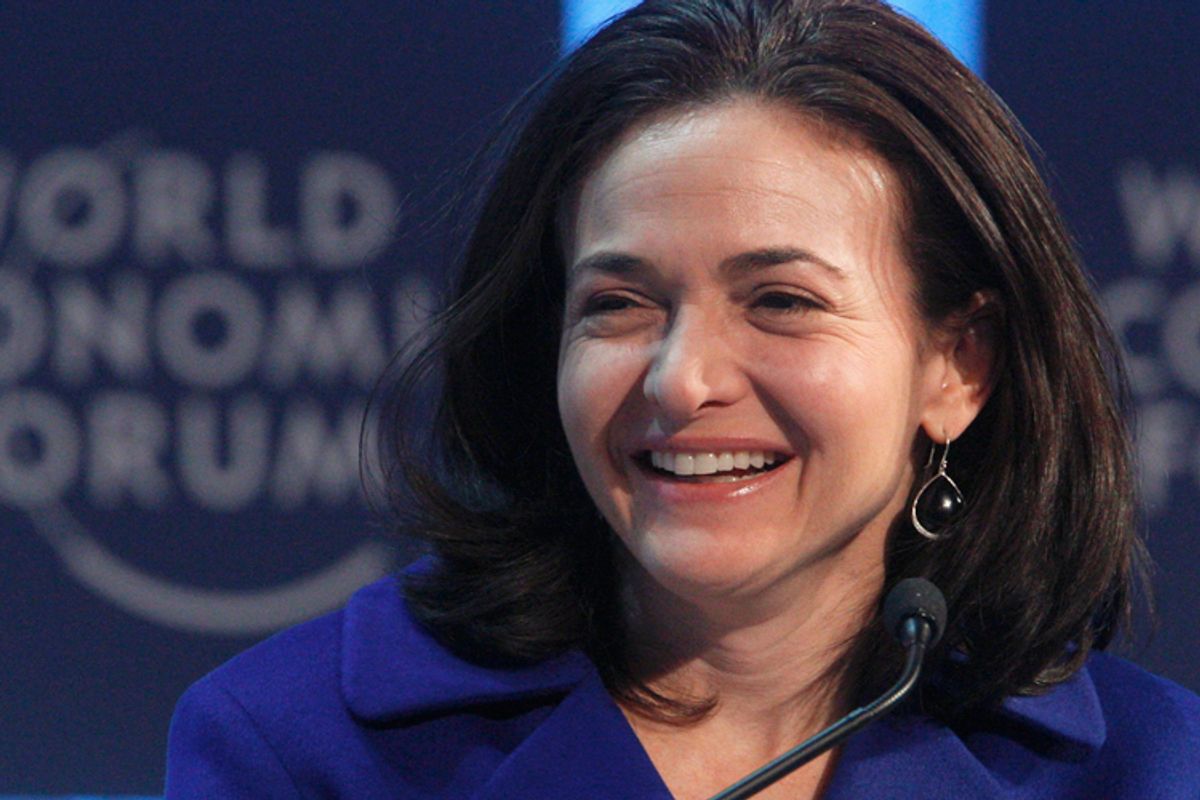 The new book from Facebook chief operating officer Sheryl Sandberg, "Lean In: Women, Work, and the Will to Lead," generated a controversy over the rigor of her politics before it even went on sale (which it does today). Salon spoke with her to discuss the book, its reaction and her own evolution as a feminist. Here's an abridged transcript of that conversation, edited for clarity and brevity.

So what’s your reaction to all of this?

[deadpan] Reaction to what?

Even before many people read the book, there’s been so much meta-reaction. What do you think, watching this from the center of it?

On a serious note, what I think is that these issues run deep. This is serious stuff. This is about who we are as a people and our expectations for our lives and our partnerships and our families, and I think people are really passionate about this. What I’m extremely worried about is stagnation and apathy, and the fact that women have had the same percentage of the leadership jobs in our country for 10 years and people don’t seem to notice or care. If this current debate gets us out of that, and makes us wake up and realize this, I think it’s a really good thing.

I went back and reread the New Yorker profile of you in 2011, and compared to the book there are some aspects of your thinking that seem to have evolved. Ken Auletta's paraphrase: “Yes, she continued, we could swap anecdotes about sexist acts, but doing so diverts women from self-improvement. She opposes all forms of affirmative action for women,” and then this is a direct quote, “If you don’t believe there’s a glass ceiling, there’s no need.” Do you still think that?

Doing that piece with Ken was actually, I think, part of my own journey to get here to write this book. I gave a TED talk on women before the piece because I saw women falling behind their male peers in the workforce, because there were all these men and women who worked for me, and at every stage, the men were aggressively trying to get to the next stage in their career. And so many times I was talking women into things. And the men come in and they’re like, “I want the new job, I want the new office,” when I would sit down with the women and say, “You should take the new job, you should take the new office,” they would say things like, “I’m just not sure,” or, “I’m still learning from my current job,” things I’d never hear from men. I think at the time I hadn’t really thought about it any more than, OK, I’m a businesswoman trying to give practical advice that I think will help women.

And the interview process with Ken really -- he pushed me hard to think about where do I fit in in terms of, Am I a feminist? Am I not a feminist? I definitely think I’ve evolved and I try to be really honest about that in my book. My book is the first time I’ve basically said, “Yes. I’m a feminist.” And here’s why I’m a feminist and here’s why I wouldn’t have said I was before, and I’m embarrassed I never said that I was before.

Salon's Rebecca Traister and I were having a conversation about this, and she was saying how life can make you into a feminist, that people can come to feminism later through accumulating and then analyzing their experiences, which can take time.

It’s a great line. Life has made me into a feminist. I’m a feminist because I graduated from college in 1991, 22 years ago, and I thought there’d be equality between men and women. By the time I got 20 years out, they aren’t. The stagnation I’m talking about in the book, I’ve lived that for the last 10 years. Those are the 10 years where I was starting to enter those rooms and sit at tables, and there aren’t any women. There aren’t enough women.

So why do you think you were still there at those tables? What made you different?

This is a longer answer than you want.

You asked me, so I’ll tell you. I had help from others, I’ve worked hard and great, and I got lucky, all of which I deeply believe. I also just wrote a book explaining how women have tied their success to those things and then don’t. It’s kind of a cyclical question to answer, right? My honest answer is: I’m lucky, I was born to an amazing family that cared about education, I had tons of help from amazing people, and I worked incredibly hard. That is my actual answer.

But as I write in the book, hearing that [Peggy McIntosh] speech on feeling like a fraud in college was transformative for me. I believe that had I not heard that speech, I would not have the job that I have. I really did internalize that, “OK, I don’t have to feel so confident, but I have to take my seat at the table anyway.” I learned the data early, that men and women were different along these lines – I didn’t want to be held back by being a woman, so I made these adjustments. And if you want to be really honest about it, I’m not claiming that I feel self-confident all the time. To this day, I don’t. But I can see and I can remember and I can take a step back, and when I’m about to not ask a question or not volunteer to do something, I can remember.

You say in the book it’s a chicken-and-egg process, individual change and structural change. Does this discussion make you want to start working on those kinds of broader policy issues?

I mean, to be clear, I’ve always thought there were broader institutional problems in public policy, and I’ve always worked on those, basically. I mean, every institution I’ve been in – I guess, two, Google and Facebook, I’ve been very focused on flexibility with policies and I’ve worked in great places and I’ve ensured that there are great policies in those places. So I’ve always believed very strongly in institutional barriers. I really believe in public policy reform. My book focuses more on the things that we can do ourselves -- not because I think they’re more important, and I think people tend to misunderstand that. It’s because I think they’re not talked about enough. I agree with everything Anne-Marie Slaughter says in terms of institutional barriers – literally, every word. I agree with everything people are saying on public policy reforms. I just don’t have anything new to say ... I think it’s worth noting that there are countries in Europe that have every institutional and public policy we could want. In France, they have equal maternity and paternity leave, and guaranteed daycare – and they still don’t have any women running their big companies.

I also believe that one of the best ways to get reform is to get more women in jobs, the senior jobs. Facebook has great policies, Google put in pregnancy parking when I got pregnant.

Recognizing that there is often this "catfight" narrative, what do you think the real differences are between your approach and Anne-Marie Slaughter's?

I think Anne-Marie and I basically agree on the exact same things, which is we both think we need more women in leadership roles, and she has focused on institutional barriers, and I think there are basically two sides on what has to happen and both are necessary. You can’t have just one.

Is it true that there is bad blood between you guys?

Would you want to run for office?

I really don’t have any plan to leave Facebook. I put it so many times on the record, and I just don’t get what to do to say it as clear as possible: I’m staying in Facebook, I really love my job.

No, it doesn’t seem like a lot of fun.

Silicon Valley culture is so invested in this idea that anyone can get ahead, and your book is basically saying, well, here are some ways in which that’s limited. There's this Michael Arrington quote: “Success in Silicon Valley, most would agree, is more merit driven than almost any other place in the world. It doesn’t matter how old you are, what sex you are, what politics you support or what color you are. If your idea rocks and you can execute, you can change the world and/or get really, stinking rich.” Do you think that’s right?

I think that compared to a lot of different industries, Silicon Valley is particularly merit-based and a particularly flexible place to work … I also believe that there are these very deeply held gender biases that all of us face and I’m very clear about that in the book. And those are true in this industry as well as all others. And part of what "Lean In" is trying to do is bring those to light and have a real conversation about them so we can change them.

In the book, you talk about asking or demanding of men to step up to the plate, and also seeing them as equal partners in every sphere. What about women whose partners just aren’t egalitarian?

Look, I’m not pretending I can give advice to every single person or every single couple for every situation; I’m making the point that we are not going to get to equality in the workforce before we get to equality in the home. Not going to happen. You know, I give advice to young women. I say “pick a partner.” If that partner is female you are in good shape because you are likely to split up things very evenly; the data’s very strong that same-sex couples split responsibilities much more evenly. If you are a female and your partner is likely to be male, this is something to really pay attention to. I say in the book, date the bad boys, date the crazy boys, but do not marry them. Marry the boys who are going to change half of the diapers.

What about people who don’t have partners? Do you think it’s harder for them to succeed if they don’t have that kind of support at home?

Can you tell me more about your thesis about the economics of spousal abuse, advised by Larry Summers?

Well, that sounds highly relevant to your current book.

Yes, it’s interesting. I haven’t even thought about my thesis for a long time, but yes, it is relevant.