A new report sheds light on NYPD’s secret surveillance of Muslim communities. And what it reveals about liberals 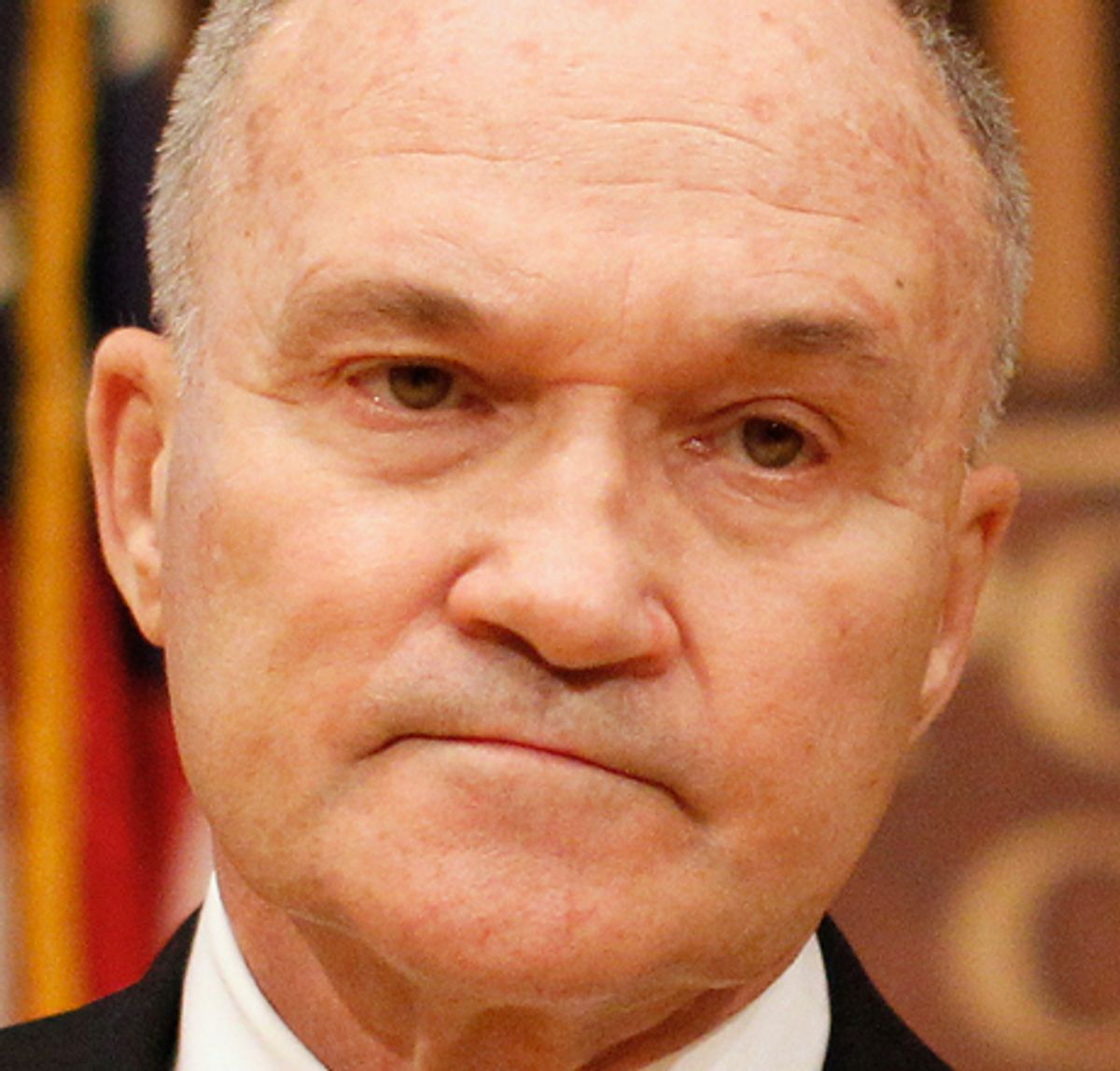 Imagine living in a small American community, innocently minding your own business, while constantly worrying that your government is monitoring how you meet with others in your community, speak about your faith, express political views, and dress — for hints that you are a terrorist. As seen by a report released today, such harassment and violations of civil liberties are constant facts of life for American Muslims today.

Mapping Muslims indicates that the NYPD's surveillance program infused Muslim communities in New York City with widespread psychic harm. Interviewees reported worries about “appearing Muslim,” whether that was defined as appearing pious, wearing the niqab or hijab, growing beards, or speaking critically about political issues pertaining to Muslims. The report illustrates a widespread fear of congregating with other Muslims, speaking or befriending others at mosque services, speaking freely about their faith, even by young students, and of the constant defenses against entrapment or solicitation by the FBI. Judging from interviewees’ answers, this report indicates civil liberties violations have been wrought upon the Muslim community in New York —and most likely wherever similar programs have been implemented.

The surveillance program was first reported on at length in 2011 by the Associated Press. It published a devastating series of articles that chronicled the NYPD’s vast spying program, put in place to track the movements and interactions of Muslims in New York, New Jersey, and Pennsylvania. The extent of financial and ideological support for the programs was remarkable. While today’s report does not address this aspect, I have written about this elsewhere. Generally, one would imagine that a local (albeit one of the largest and most powerful) police department in the U.S. would not be able to extend the scope of its surveillance beyond the confines of the city itself, and certainly not beyond the confines of New York State.

Yet, under the auspices of the NYPD’s International Liaison Program (a counterterrorism initiative established by NYPD Commissioner Raymond Kelly, which falls under a non-profit discretionary fund) created by Mayor Bloomberg for unforeseen contingencies, such as natural disasters, from hurricanes to counterterrorism, the NYPD was essentially freed from funding or jurisdictional constraints. This enabled selected NYPD officers to travel as far as needed for activities such as the interrogation of spying suspects in London and Madrid or for other counterterrorism policing activities in “Tel Aviv…Amman, Singapore, Santo Domingo, Toronto, Montreal, Paris, Lyons” and elsewhere. Indeed, American Airlines proudly announced its partnership with the NYPC in 2007, whereby it would provide travel vouchers for several participants in the program. The federal government cooperated extensively with the NYPD, giving it $1.6 billion dollars to finance its spying program. Indeed, collaboration between the NYPD and the federal government was extensive. As the Huffington Post reported in 2011:

“A veteran CIA officer, while still on the agency's payroll, was the architect of the NYPD's intelligence programs. The CIA trained a police detective at the Farm, the agency's spy school in Virginia, then returned him to New York, where he put his new espionage skills to work inside the United States. And [in July 2011], the CIA sent a senior officer to work as a clandestine operative inside police headquarters.”

Oversight came from New York City Mayor Michael Bloomberg, who approved and subsequently defended the NYPD program. To a lesser extent, Newark’s Mayor Cory Booker also approved it, though he claimed not to know the scope of the spying program. Moreover, U.S. Attorney General Eric Holder has never clarified the extent of his knowledge of the NYPD’s surveillance program. Neither have the Attorneys General of NJ, NY, PA, or CT, in whose states the NYPD ventured to continue its surveillance.

What the report makes clear is the extent to which the NYPD’s relentless surveillance program has decimated trust and bonds within various Muslim communities. Of course, for Islamophobes and general supporters of the War on Terror waged at the Federal level, these findings will be welcome—since at an important cultural level, that is the purpose of waging war on Muslims in the United States. That must be the primary purpose, since it has been established by various sources—including the FBI (even prior to 2005; scroll to the bottom)--that Muslim Americans are among the least likely terrorists.

The NYPD surveillance program went into place in 2001. As late as 2007, the Mayor was soliciting funds for the counterterrorism initiative, which corporations such as American Airlines were happily supporting. Indeed, even as late as August of last year, Bloomberg and Microsoft announced their enthusiastic collaboration to dissect “real-time” data and to install over 3,000 cameras and 2600 radiation detectors throughout the city for the purposes of intercepting and pre-empting terrorism.

It is insufficient to call the Mapping Muslims or the NYPD’s counterterrorism project ridiculous or nonsensical. It is much more than that: It is dangerous, divisive, discriminatory, and deeply oppressive. It is part and parcel of a culture of fear that has been hyped up and amplified with the support and funding for Islamophobic policies on the part of the U.S. government -- by the CIA, federal government, and various Democratic Party apologists, such as Nancy Pelosi and Dianne Feinstein. And before anyone decides to point out how 19 hijackers blew up the World Trade Center on September 11, 2001, let me urge them to read these links which — again — show how little of a threat Muslim Americans, Radical Muslims, or foreign Muslims are to American safety.

Moreover, even at the federal level of reporting, there is no evidence—none—that can identify a terrorist threat to the United States. As the U.S. Senate Committee on Homeland Security and Governmental Affairs concluded last October (p. 2 of the pdf):

“Despite reviewing 13 months’ worth of reporting originating from fusion centers from April 1, 2009 to April 30, 2010, the Subcommittee investigation could identify no reporting which uncovered a terrorist threat, nor could it identify a contribution such fusion center reporting made to disrupt an active terrorist plot.”

No evidence of terrorism, despite the fact that, according to the same report, “by its own estimates DHS has spent somewhere between $289 million and $1.4 billion in public funds” on surveillance centers.

So, where is the threat that drives the NYPD, the CIA, the U.S. Attorney General’s office, and the U.S. military to harass and exploit Muslim communities? It might be perceived in the Justice Department’s conclusion that “Muslim juries” are a threat to “our values.” Or it might be perceived in the NYPD’s continual screening of the Third Jihad—an intensely hateful and Islamophobic film--during the orientation of its police officers.

As the MACLC report describes:

“A notorious example of the anti-Muslim culture at the NYPD that left many of our interviewees – and New Yorkers in general – ill at ease was the widely-publicized screening of a virulently anti-Muslim film, “The Third Jihad,” on continuous loop during the NYPD’s cadet training program from October to December 2010. The film presents a montage of images of terrorist attacks, beheadings and dead bodies, while a narrator suggests that American Muslims aim to “infiltrate and dominate” America, and that they are engaging in a “cultural Jihad” aimed at infiltrating and undermining American society.”

As I wrote last year:

“As part of a pattern of explicitly Islamaphobic practices on the part of the NYPD, we also heard about the Third Jihad, a racist training film (funded by the Clarion Fund, the same organization that attracted Sheldon Adelson, a big supporter of Newt Gingrich’s [Presidential] campaign) that insisted that even “normal” Muslims had deep terrorist undersides. A clip of NYPD Commissioner Kelly was included in the film, although he disavowed participating in the film and insisted that the clip was taken from elsewhere. Later, it turns out, he lied again: in fact, he was interviewed for it 5 years ago. Until that lie was revealed, Kelly refused to disavow or apologize for his part in the film; yet now he finds it “objectionable. Another lie: Kelly also denied that film was part of NYPD orientation, despite the fact that it was shown to 1500 police officers.”

The MACLC reports that the NYPD engaged in other forms of internal anti-Muslim discrimination: “For instance, Muslim officers were made to leave the room when certain briefings occurred.”

Or it might be perceived in House Minority Leader Nancy Pelosi’s acquiescence? (ambivalence? support?) of the White House’s decision to have secret kill lists for the purposes of assassinating American Muslims. The conservative blog, HotAir has isolated and analyzed Pelosi’s remarks, such as the following:

"I don't know the American people want [the administration] to say, when in doubt, we decided that it wasn't that imminent, and boom, we get hit again. It's hard. It's not an easy thing, especially when you see that the values on the other side are not there. This is their life's work to go to heaven - not to put down their beliefs, but the fact is, we don't have a shared respect for life."

The devastation wreaked upon Muslim communities in the United States is based on little evidence. Yet, for well over a decade, Muslims have borne the brunt of what novelist Teju Cole describes as the “empathy gap,” in which racism against Muslim Americans and international populations is diminished or diluted altogether. In fact, it takes Bishop Desmond Tutu, an international figure with an impeccable reputation for defending human rights to challenge the President’s authority to kill non-Americans.

That empathy gap results in some of the most racist, divisive, lethal policies against Muslims — internationally and at home. And yet, somehow, when the racism of unlikely allies such as Rand Paul is brought up, very few seem to remember that it is the current Democratic Administration (with the support of many Republicans and Democrats), that is engaging in a systematic targeting of Muslims through kill lists, TSA no-fly lists, pre-emptive detention, solitary confinement for political dissent, NYPD surveillance, and CIA infiltration.

What makes it especially egregious, though, is that the war on Muslims is being justified through a general worldview that should be challenged rather than supported by “liberal” Democratic politicians who implicitly (or explicitly) endorse the idea that it is perfectly OK to attack Muslims physically and psychically. “Because the values on the other side is not there.” Because “the fact is, we don’t have a shared respect for life.”

But the real conclusion to draw from these events might be that, at various levels of the U.S. government, American politicians and liberals don’t have respect for Muslims communities, let alone their lives.