The politics of Austin's rickshaws

The pedicabs come out to play during SXSW. And yes, Uber can get one to pick you up from your bar stool 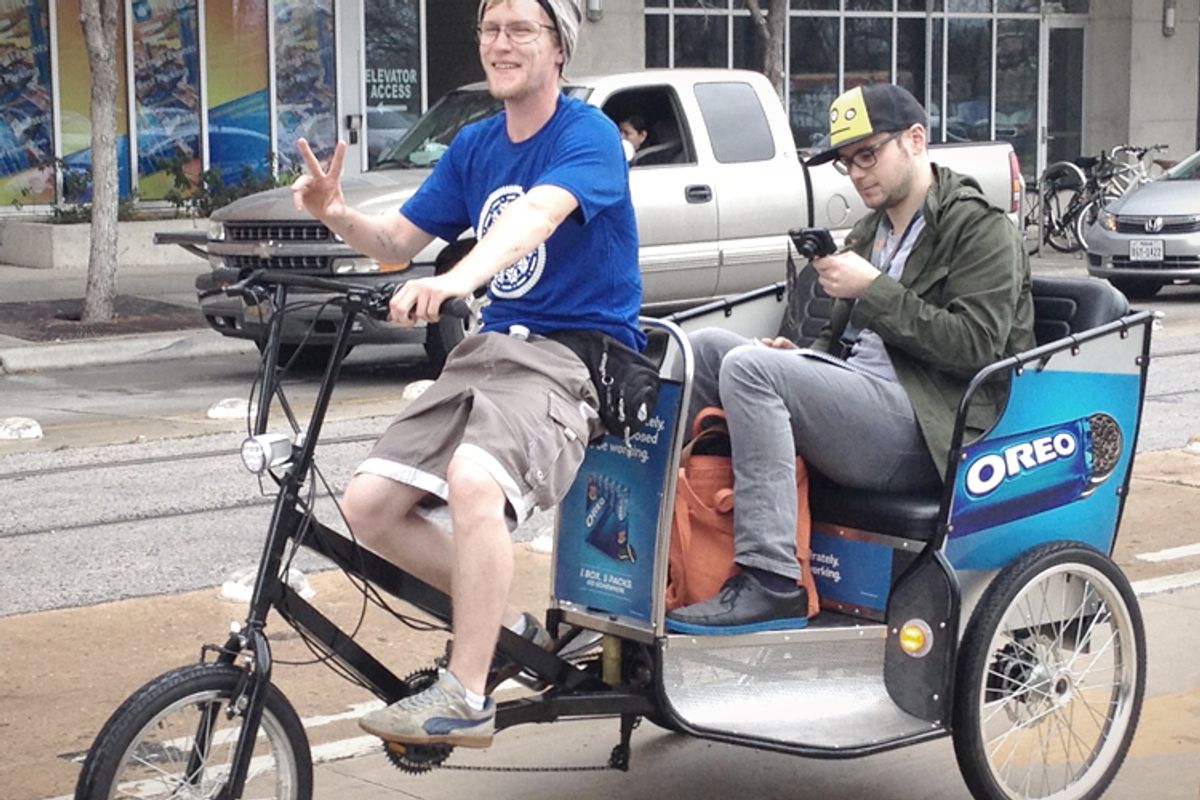 And everywhere, the roaring drunk are ferried across town by chariot.

Wait, no, I mean pedicab.

It's old news to veteran SXSWers, but immediately striking to anyone new to town. Bicycle-powered cabs are a fixture downtown. Twenty-four companies operate pedicabs. As of last summer, reports the Austin Monthly, there were 341 permitted cabs and 955 authorized drivers. There's even a company called "Metro Rickshaw."

I am obsessed with the pedicabs. I can't stop thinking about the first, and only time, I rode in one. I was in Xiamen, China, in 1985, when foreigners were few and far between outside of the biggest cities (and not so common there, either). A friend and I had just gotten off a minibus around midnight, and were looking for transportation to lodging recommended by the Lonely Planet. The only means available was a pedicab operated by a man who looked about 80 years old and appeared to weigh about 80 pounds. He was nothing but skin and bone and gristle, but he happily agreed to take us to our hostel for some infinitesimal price.

At the time, I remember thinking, this is the most overt imperialist act I have ever been party to. OK, it wasn't a true rickshaw -- the guy wasn't jogging along holding two poles on his shoulders. But there was still something so raw about having one person's physical labor directly responsible for moving us from point A to B. Knowing that we had more cash in our pockets than he probably would earn in his lifetime just made it worse. For the next three months, I never got in one again. I would rather walk.

And I still can't, although the politics of pedicab labor seem entirely different in Austin. The "drivers" are almost all young and healthy-looking, and most of the time, even when it has been spitting rain, they seem basically exuberant. Some appear to treat the entire exercise as performance art. I've seen pedicab cyclists dressed as Superman and Wonder Woman, with stereos blasting, pulling moves in crowded traffic with all the daring and recklessness of a classic bike messenger urban outlaw.

And it's not as if they've been consigned to the technological backwater. Uber, the company with the mobile app that facilitates private car hiring, has been working with Austin's pedicabs for three years.

So, yeah, if it is late on a March night and you want to get from the amazing Craft Pride beer garden at the end of Rainey Street to the Flurry party at TenOak on Colorado Street, but you're too lazy or wasted to walk 10 blocks, you can click a few buttons on your smartphone and get your own personal blood-and-sweat-powered pedicab to take you there. The newest technologies, married to one of the very simplest and oldest ways one human can exploit another.

It's good exercise, I guess, for the pedal-pushers, who reportedly can make $300 in a good night. But given the overall decadence of the SXSW downtown nightlife scene, I kind of wish that one of the tech companies looking to make a splash here would hand out free whips at the pedicab staging stations. Some of those guys and gals move pretty slowly when going up the hill on Congress. Maybe they need some extra incentive.

UPDATE: I realized, after posting this, that I neglected to consider the climate change-related advantages to choosing pedicabs over combustion-engine cabs. On behalf of the earth, I apologize.