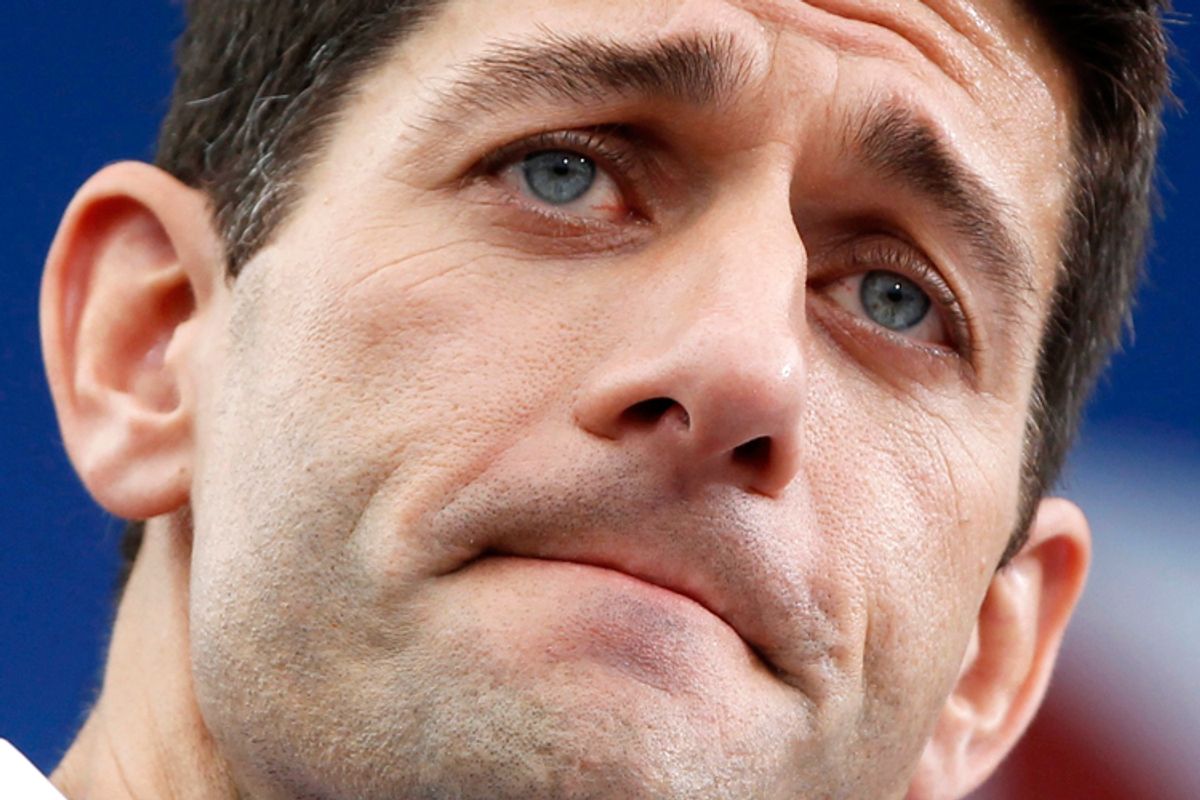 One of the ways to differentiate liberals and conservatives today is to consider their respective caricatured sci-fi visions of the future. In cartoon terms, the liberal caricature is a "we're all in this together" utopia of communitarian kumbaya, while the conservative caricature is basically "Back to the Future II" -- a Biff Tannen-dominated dystopia of moral and economic decay whose only unifying ethos is thinking of -- and violently protecting -- oneself. Thus, liberals generally support stuff like universal social insurance and the social safety net, while conservatives tend to get fired up against gun control, taxes and a social safety net, and for massive military budgets.

At the rank-and-file voter level, this is, of course, a cartoon version of ideologies; many self-described liberals are hardly dreaming of turning America into a giant kibbutz while many self-described conservatives just want the government out of their face. However, at the elected official level in Washington, the conservative cartoon in particular is no comedic caricature: As Rep. Paul Ryan's new House Republican budget shows, it is an actual worldview, with specific legislative proposals in tow.

Here are the four big takeaways from that budget, and how they illustrate the Republicans' larger worldview.

1. A recommitment to the Military State: One of the few good things to come out of the sequestration fight has been a long-overdue debate over Pentagon profligacy in specific and American militarism in general. Indeed, even though the sequestration cuts are so small they still leave the Pentagon budget bigger in real dollars than it was during most of the height of the Cold War, the prospect of any cuts at all seemed to hold out the possibility of a larger reevaluation of the centrality of the Pentagon in national life. That possibility seemed especially real considering the fact that the allegedly deficit-focused GOP had recently been shamed into supporting some of those cuts.

Now that the Ryan budget is upon us, though, that possibility seems less likely. As the Christian Science Monitor reports, he proposes to uses massive cuts to social programs "to pay for $500 billion in additional defense spending over the next 10 years." In other words, at a time when the Iraq and Afghanistan wars are scheduled to conclude and the sluggish economy necessitates a stronger social safety net, the GOP's dystopian vision has prompted it to propose making the social safety net weaker in order to spend even more money on the military.

2. Austerity for Most, Corporate Welfare for a Few:: Ryan's budget purports to save $5.7 trillion over the next decade. But because the GOP's dystopian vision of the future is one with almost no safety net, the cuts are not broad -- they are targeted at social programs.

As the New York Times notes, "because military spending would be allowed to rise $500 billion over the current spending caps through 2023, the cuts to domestic programs could be deep." That means big cuts to Pell Grants, big reductions in Medicaid coverage, limits on welfare for the poor and a voucherization of Medicare (more on that last one in a second).

From an Economics 101 perspective, all of this is just dumb. When an economy is struggling, counter-cyclical spending by the government is part of the solution. And not just any spending, but specific spending on non-defense social programs (defense spending is one of the least efficient ways to create jobs, by the way). As just the latest example of that axiom, the Congressional Budget Office reported that the 2009 stimulus mitigated some of the worst effects of the recession by adding up to 3.3 million jobs.

That said, even if you somehow dismiss the Economics 101 argument and insist (contrary to public opinion) that deficit reduction must be Congress's priority, the particular way Ryan proposes to achieve that deficit reduction is disturbing. He proposes huge cuts to Medicare to fund continued handouts to defense companies. He proposes slashing social programs but also continuing massive taxpayer subsidies to already-wealthy oil and gas companies. He proposes, in short, austerity for most, and corporate welfare for the politically connected few.

3. Strengthening the Health Insurance Industry Cartel: Whether it's "Back to the Future II," "Robocop" "Total Recall" or any of the dystopian sci-fi classics, private corporations run everything. As evidenced by his Medicare proposal, that's consistent with Ryan and the House GOP's vision for the healthcare economy in America.

As USA Today reported in yesterday's scathing Op-Ed, Ryan proposes to "remake the traditional government-run program that covers most of a retiree's healthcare needs for as little as $104.90 per month ... in its place, Ryan would provide each retiree with a payment (known variously as premium support or a voucher) to help subsidize the cost of buying insurance."

Obamacare, of course, is a different version of this same central concept; in a sense, it was a massive government subsidy of the private insurance companies. This was why some progressives (including me) raised serious objections to it and pushed for a public option that would at least allow consumers to remove themselves from the for-profit private insurance system. Those critics pointed out that in so intensely subsidizing the private insurance companies, it would financially bolster those companies and thus politically strengthen them in their efforts to prevent America from creating the single-payer healthcare system that most other industrialized nations have.

However, at least Obamacare left the basic concept of government-run Medicare intact. Ryan and the House GOP do not; they aim to use taxpayer cash to begin privatizing the system.

4. Tax Cuts for the Rich, Tax Increases for Most Others: In the dystopian sci-fi future, billionaires are the "makers" and everyone else are the "takers." Thus, following the ethos articulated in Mitt Romney's infamous 47 percent speech, Ryan and the House GOP propose to further reward the former and punish the latter. Specifically, at a time when corporate profits are skyrocketing and in a nation with one of the lowest effective corporate tax rates in the world, they propose a huge cut in the corporate tax rate. They also propose to do away with the seven-tiered progressive income tax, and replace it with a two-tiered one with brackets of 10 percent and 25 percent.

That latter proposal is a particularly ideological kind of class war. As the Atlantic Monthly notes, "it will be very difficult for Ryan to implement this tax cut without raising taxes on middle-class people." The magazine cites a Brookings Institution report finding that the proposal "would raise taxes on most people making less than $100,000 a year."

Even the conservative Forbes magazine agrees, noting that the idea gives "taxpayers earning in excess of $1 million (an) average tax cut of $265,000" and that "there are simply not enough deductions to limit or eliminate to offset" that revenue loss. Forbes adds that if, as the House GOP asserts, the proposal is revenue neutral, that means "those earning in excess of $200,000 are going to walk away with a net tax cut" and there will be an "increase in the tax liability of those earning less than $200,000."

At a time when the noise of a 24-7 news cycle and the complexity of Orwellian newspeak make it seem impossible to tell what's really going on in politics, America today owes a big thank you to Ryan. That's because, as shown, his budget reveals the GOP's dystopian worldview in simple-to-understand, crystal-clear terms. The question now is whether America allows that worldview to become public policy.