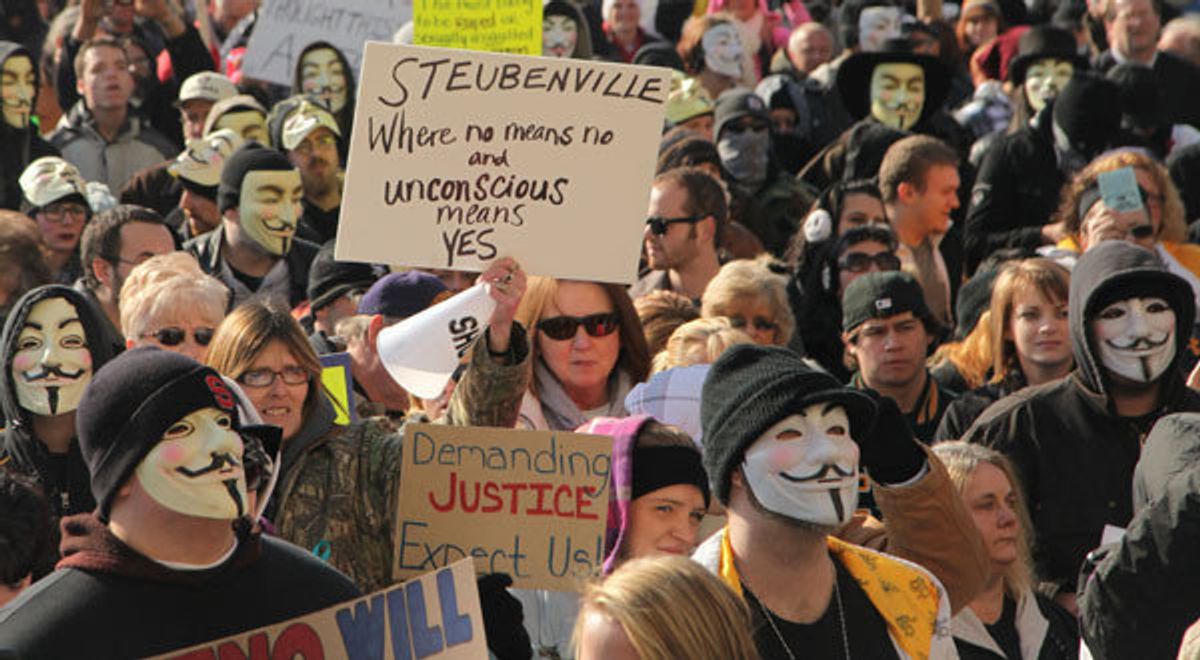 First, there are the photos depicting the 16-year-old Jane Doe at the heart of the Steubenville, Ohio, rape case being carried around by her hands and feet, head hanging lifelessly toward the floor. Then there is the viral video of a high school boy deriding her as "dead" and "so raped." And then there is the pre-trial testimony from three "Big Red" athletes (also implicated but as-yet-untried) who say they witnessed the unconscious girl being paraded around, slurring her words and collapsing on the ground before being digitally penetrated by Trent Mays and Ma'lik Richmond.

But lawyers for the defense are prepared to argue on Wednesday that she consented to it, every step of the way. Not just consented, but as a drunk, football "groupie" following the "Big Red" athletes from party to party, she was practically asking for it.

As Rachel Dissell reported for the Cleveland Plain Dealer:

"Defense attorneys believe the girl, who lived across the river in Weirton, W.Va., made a decision to excessively drink and -- against her friends' wishes -- to leave with the boys. They assert that she consented to sex."

And if you didn't think the framing could get any more more stomach-churning, it can. Attorney Walter Madison, who represents one of the accused football players, told the Plain Dealer that there is "an abundance of evidence here that she was making decisions, cognitive choices," and that the victim, in her impaired state, "didn't affirmatively say no" to being sexually assaulted.

But the law -- and, frankly, common sense -- doesn't require a victim to actively resist or say the word "no" for a rape to occur. And in pretrial testimony, three boys who were present that night told a judge that the deeply intoxicated girl was coming in and out of consciousness while Mays and Richmond digitally penetrated her.

This murky, was-she-wasn't-she conscious, did-she-didn't-she want to be dragged by her hands and feet and sexually assaulted "debate" is only as maddening as it is predictable. Focusing on the victim's behavior -- rather than the actions of the accused -- is an infuriatingly common tactic used to silence rape victims. Silence that, until her parents discovered a leaked video of her assault online, Steubenville's Jane Doe also fell victim to.

And as Alexander Abad-Santos at the Atlantic wrote about the details of the case: "Date rape exists."

That under the law, even though a woman or girl may accompany her attacker, that does not equal consent? And that, under the law, a woman or girl under the influence of drugs or alcohol, willingly or unwillingly, is not at fault for being sexually assaulted? Date rape is a felony under Ohio state law — with two mentions of controlled substances under the National District Attorney's Association classification of rape.

Mays and Richmond are set to go on trial Wednesday in Jefferson County juvenile court. The country will be watching.