The right has a new plan to capture the country's youth vote: Take over public school curriculums 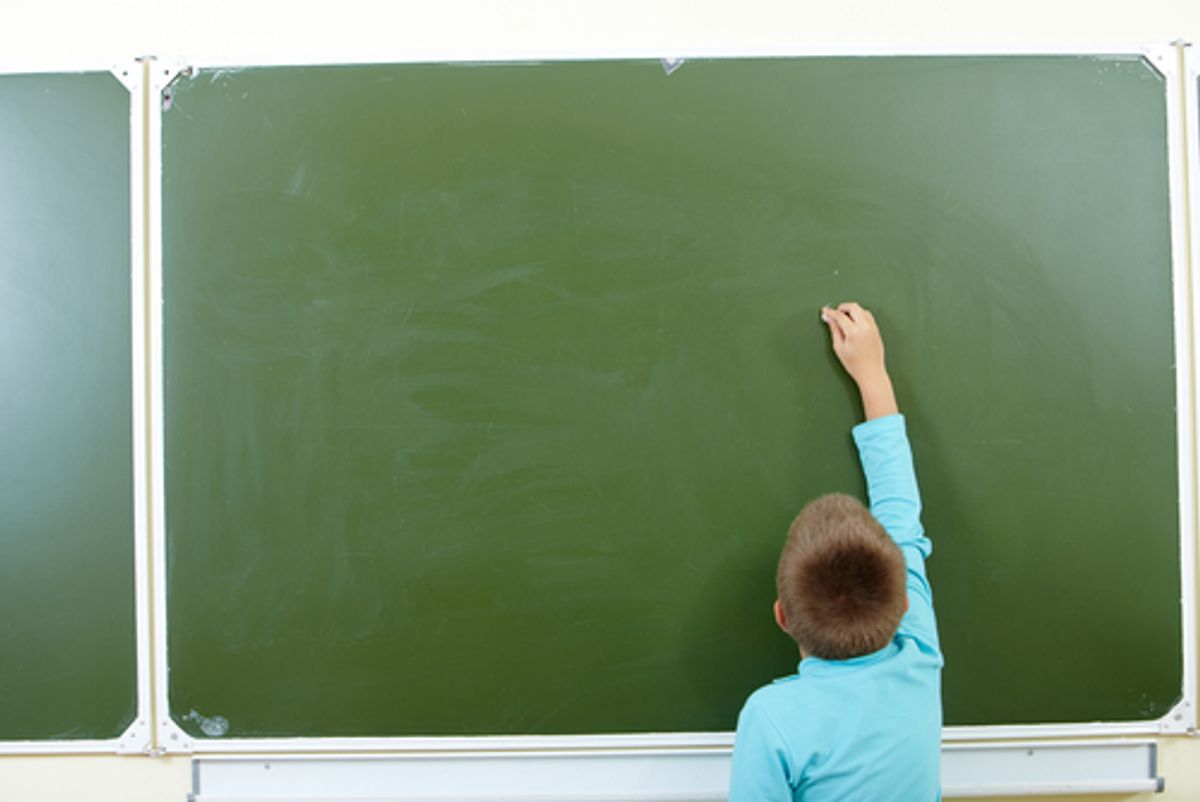 If recent elections have taught us anything, it’s that young Americans have taken a decided turn to the left. Young voters delivered Obama the election: the under-44 set voted Obama and the over-45 set broke for Romney. The youngest voters, age 18-29, gave Obama a whopping 60 percent of their vote.

Now Republicans have a plan to try to recapture the youngest voters out there: Take over the curriculum in public schools, replace education with a bunch of conservative propaganda, and reap the benefits of having a new generation that can’t tell reality from right-wing fantasy.

How well this plan will work is debatable, but in the meantime, these shenanigans present the very real possibility that public school students will graduate without a proper education. To make it worse, many of these attempts to rewrite school curriculum are happening in Texas, which can set the textbook standards for the entire country by simply wielding its power as one of the biggest school textbook markets there is. With that in mind, here’s a list of 11 lies your kid may be in danger of learning in school.

Lie No. 1: Racism has barely been an issue in U.S. history and slavery wasn’t that big a deal.

The Thomas B. Fordham Institute reviewed the new social studies standards laid down by the right-wing-dominated Texas State School Board and found them to be a deplorable example of conservative wishful thinking replacing fact. At the top of list? Downplaying the role that slavery had in starting the Civil War, and instead focusing on “sectionalism” and “states' rights,” even though the sectionalism and states' rights arguments directly stemmed from Southern states wanting to keep slavery. There’s also a chance your kid might be misled to think post-Civil War racism was no big deal, as the standards excise any mention of the KKK, the phrase “Jim Crow" or the Black Codes. Mention is made of the Southern Democratic opposition to civil rights, but mysteriously, the mass defection of Southern Democrats to the Republican Party to punish the rest of the Democrats for supporting civil rights goes unmentioned.

Lie No. 2: Joe McCarthy was right.

The red-baiting of the mid-20th century has gone down in history, correctly, as a witch hunt that stemmed from irrational paranoia that gripped the U.S. after WWII. But now, according to the Thomas B. Fordham report, your kid might learn that the red baiters had a point: “It is disingenuously suggested that the House Un-American Activities Committee—and, by extension, McCarthyism—have been vindicated by the Venona decrypts of Soviet espionage activities (which had, in reality, no link to McCarthy’s targets).” Critical lessons about being skeptical of those who attack fellow Americans while wrapping themselves in the flag will be lost for students whose textbooks adhere to these standards.

Lie No. 3: Climate change is a massive hoax scientists have perpetuated on the public.

The American Legislative Exchange Council (ALEC) has been hard at work pushing for laws requiring that climate change denialism be taught in schools as a legitimate scientific theory. Unfortunately, as Neela Banerjee of the L.A. Times reports, they’ve already had some serious success: “Texas and Louisiana have introduced education standards that require educators to teach climate change denial as a valid scientific position. South Dakota and Utah passed resolutions denying climate change.” Other states are taking the “teach the controversy” strategy that helped get creationism into biology classrooms, asking teachers to treat climate change like it’s a matter of political debate instead of a scientifically established fact.

Lie No. 4: The Bible is a history textbook and a scientific document.

Texas passed a law in 2007 pushing schools to teach the Bible as history and literature in schools. Since that was already being done in most schools, the law was clearly just a backdoor way to sneak religious instruction into schools, and a report by the Texas Freedom Network (TFN) demonstrates that many of them have taken full advantage. One district treats the Bible stories like history by “listing biblical events side by side with historical developments from around the globe.” Many other schools are teaching that the Bible "proves" that the Earth is only 6,000 years old. The Earth is actually over 4 billion years old.

Lie No. 5: Black people are the descendants of Ham and therefore cursed by God.

Among the courses justified by the 2007 Bible law, TFN found two school districts teaching that the various races are descended from the sons of Noah. All the Bible really says about the sons of Noah is that Ham was cursed by his father so that his descendants would be slaves, but American slave owners used this passage to claim that Africans must be the descendants of Ham and therefore their slave-owning was OK by God. Make no mistake. The only reason this legend has persisted and is popping up in 21st-century classrooms is that conservative Christians are still trying to justify the enslavement of African Americans over a century ago.

Lie No. 6: Evolution is a massive hoax scientists have perpetuated on the public.

Creationists have an endless store of creative ways to get around the Constitution and the courts when it comes to replacing legitimate biology education with fundamentalist Christian dogma. Various states have employed an extensive school voucher system that has allowed creationist dogma to flourish. College-age activist Zack Kopplin has been chronicling the problem, and has found various schools nationwide using taxpayer dollars to teach that evolution is a “mistaken belief” and that the Bible “refutes the man-made idea of evolution.” Why do these school administrators believe that scientists are hoaxing the public by making up evolution? Kopplin found a Louisiana school principal who claimed it’s because scientists are “sinful men” seeking to justify their own immorality, and another Florida school teaching that evolutionary theory is “the way of the heathen.”

Lie No. 7: Sex is awful and filthy, and you should save it for someone you love.

While things are improving, even in notoriously fact-phobic states like Mississippi and Texas, “abstinence-only” education continues to persist in school districts across the nation. TFN found that nearly three-quarters of Texas high schools are still teaching abstinence-only, which is based on the fundamental and easily disproved lie that premarital sex is inherently dangerous to a person’s mental and physical health. On top of this, TFN found that many schools are still passing on inaccurate information on condoms and STI transmission, usually exaggerating the dangers in a futile bid to keep kids from having sex. Unfortunately, even Texas school districts that use curriculum that educates correctly on contraception use are still trying to spin abstinence-until-marriage as a desirable option for all students, even though premarital sex is near-universal in the real world.  Abstinence-only may be discredited with the voters, but sadly it’s still very normal in Texas, other red states, and even across the nation.

Lie No. 8: Dragons actually once existed.

As much as “Game of Thrones” fans might wish otherwise, dragons are not real and have never existed. But as reported by Mother Jones, Louisiana’s notorious voucher school system has let some crazy nonsense fly in the classroom, including the claim that dragons used to roam the planet. A book being used in Louisiana classrooms titled "Life Science" and published by Bob Jones University Press claims that “scientists” found “dinosaur skulls” that the book suggests are actually dragons. “The large skull chambers could have contained special chemical-producing glands. When the animal forced the chemicals out of its mouth or nose, these substances may have combined and produced fire and smoke,” the book claims.

Lie No. 9: Gay people do not actually exist.

After being beat back by gay rights and sexual health advocates, Republicans in the Tennessee Legislature are once again trying to bring back the “don’t say gay bill.” The law would ban a teacher from admitting the existence of homosexuality to students prior to the 8th grade, even if the students ask them about it. Instead, the bill would require turning a student who confesses to being gay over to his parents, with the legislators clearly hoping that punishment will somehow make the kid not-gay. The entire bill rests on and promotes the premise that homosexuality isn’t a real sexual orientation, but just the result of mental illness or confusion, and if it’s enforced, that message will come across to the students.

A history textbook snagged from a Louisiana school funded by the voucher program tells students: “Many young people turned to drugs and immoral lifestyles and these youths became known as hippies. They went without bathing, wore dirty, ragged, unconventional clothing, and deliberately broke all codes of politeness or manners. Rock music played an important part in the hippie movement and had great influence over the hippies. Many of the rock musicians they followed belonged to Eastern religious cults or practiced Satan worship.” It’s unclear if the book also teaches that if you play a Queen record backward, you can hear Satan telling you to smoke pot, but that kind of critical information could also be conveyed during the teacher’s lectures on the subject.

Idaho state Sen. John Goedde, chairman of the state’s Senate Education Committee, has introduced a bill that would require students not only to read Rand’s ponderous novel "Atlas Shrugged," but also to pass a test on it in order to graduate. Goedde claims to mostly not be serious about this bill, but instead is using it as a childish attempt to piss off the liberals, but it’s still the sort of item parents need to watch out for.

After all, Texas textbook standards require that an obsession with the gold standard be taught as a legitimate economic theory instead of the mad ravings of cranks that it is. We live in an era where no amount of right-wing lunacy is considered too much to be pushed on innocent children like it’s fact. Anyone who doubts that should just remember one word: dragons.