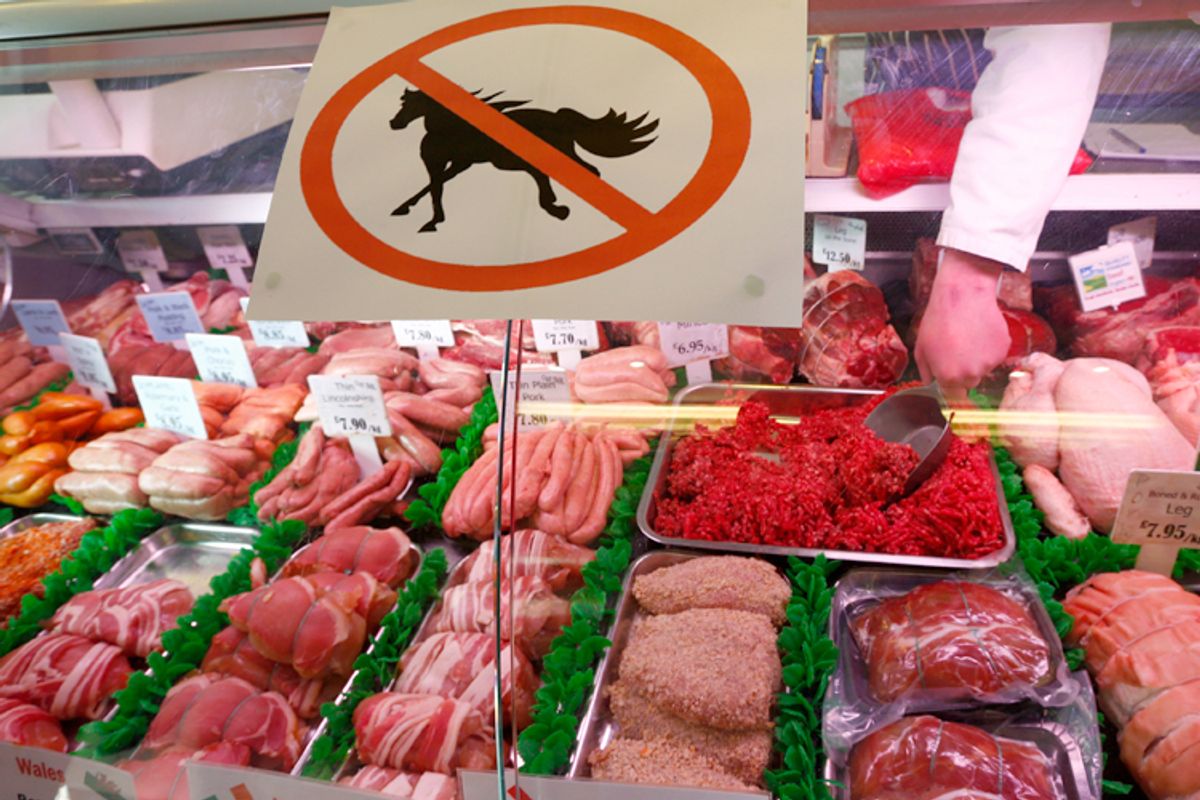 For the first time in six years, the U.S. is set to begin slaughtering and exporting horses for human consumption. But the horse meat scandal sweeping much of Europe has raised the haunches, so to speak, of a bipartisan coalition of lawmakers who have proposed a permanent ban on the practice.

Sen. Mary Landrieu, D-La., Sen. Lindsey Graham, R-S.C., Rep. Patrick Meehan, R-Pa., and Rep. Jan Schakowski, D-Ill., have co-sponsored the Safeguard American Food Exports (SAFE) Act to ban domestic horse slaughter and the practice of shipping horses to other countries to be killed for human consumption. The House version was referred to the Committee on Energy and Commerce and the Committee on Agriculture on Tuesday, and the Senate Committee on Health, Education, Labor and Pensions is currently considering the Senate measure.

“This is a bill whose time has come,” said Rep. Meehan at a press conference on Wednesday. “Until a ban is in place, every horse is just one bad sale away from being sent to slaughter.”

Sen. Landrieu echoed his sentiment in an earlier statement on a similar measure:

Expressing a lifelong love of horse riding like her daughter, Mary Shannon Snellings, who was present, Landrieu said she was "horrified" to learn in the past that horse slaughterhouses existed in the U.S.

The practice may have been dormant for six years, but has a long history in this country. The "horseflesh industry" has been "around since the advent of the train and car," according to Deanna Stillman.

As she wrote for Salon on Saturday:

By the end of the 19th century, the horse had outlived its usefulness — except for being money on the hoof. At the time, there were about two million mustangs running the range, as well as countless other horses across the country — carriage horses, plow horses, war horses and more. As I document in my book “Mustang: The Saga of the Wild Horse in the American West,” hundreds of thousands of wild horses were driven up the cattle trails right to the plants in Chicago, and they were then shipped to Europe in tin cans or to California as chicken feed for the thriving poultry industry. The railroad even had a special rate for such shipments.

One rendering plant in particular processed most of the horses, figuring prominently in the plundering of the West. This was the country’s first major equine slaughter operation, started in 1923 by the notoriously dapper Englishman P.M. Chappel and his brother, Earl. The Chappel Brothers Corporation, or CBC, rendered so much meat that it was known among cowboys as “the Corned Beef and Cabbage.” In its first year, as Walker D. Wyman reports in his seminal book “The Wild Horse of the West,” “about half the 1,446 horses processed under federal jurisdiction were canned, and it is certain most of them were wild.” The result was 149,906 pounds of meat from the Chappel plant alone; the total yield from the nearly 200 plants that were operating across the country that year was 22,932,265 pounds.