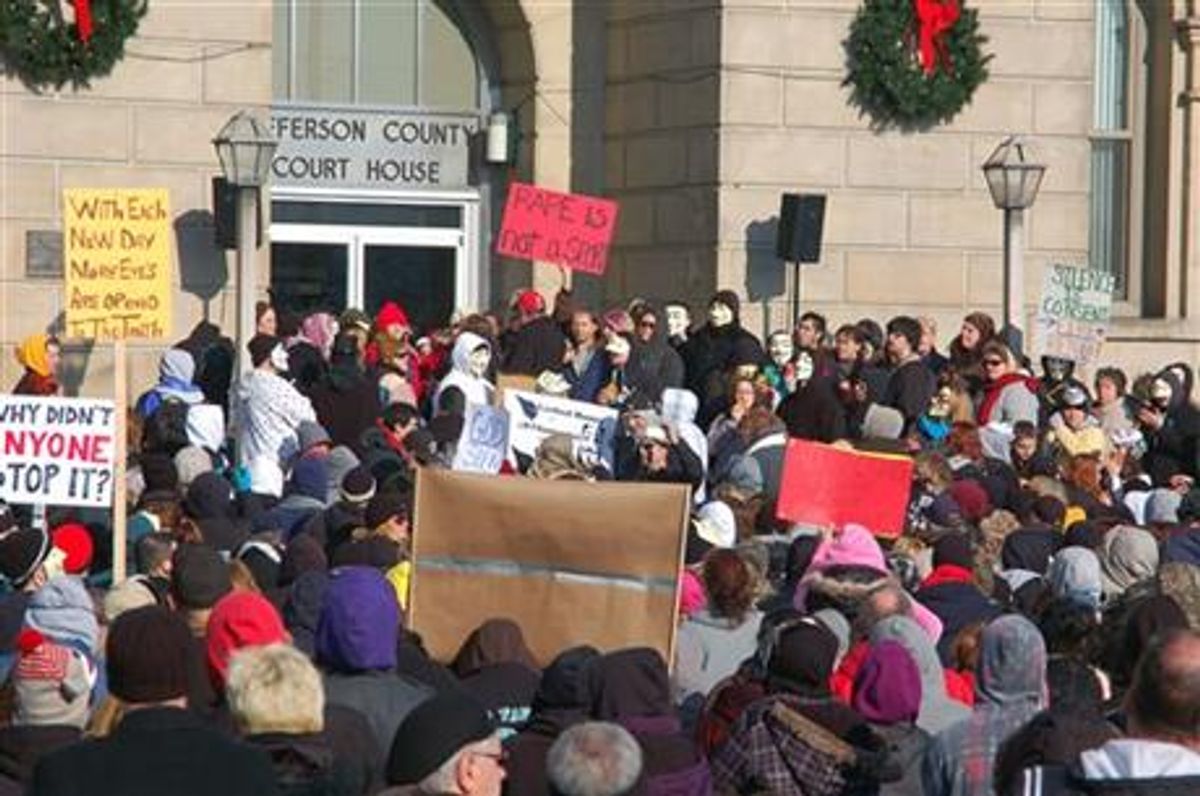 COLUMBUS, Ohio (AP) — Two high school football players were scheduled to go to trial on charges they raped a 16-year-old girl after an alcohol-fueled party last summer, in a case that has drawn international attention over allegations more students should have been charged.

The case being heard Wednesday in Jefferson County juvenile court in Steubenville has led to questions about the influence of the local football team, a source of a pride in a community that suffered massive job losses with the collapse of the steel industry.

Attorneys for Ma'Lik Richmond, 16, and Trent Mays, 17, have denied the charges and are seeking to have the case dismissed.

Each teen is charged with assaulting the West Virginia girl, first in the back seat of a moving car after a party Aug. 11, and then in the basement of a house. Mays also is charged with illegal use of a minor in nudity-oriented material.

Witnesses said the girl was so drunk she threw up at least twice and had trouble walking and speaking. She was also photographed being carried by the two young men.

In an excerpt of a videotaped interview with ABC's "20/20," Richmond said the photo was a joke, and the girl was awake and was a willing participant.

If convicted, Mays and Richmond could be held in a juvenile jail until they turn 21. They have denied any wrongdoing.

The Associated Press normally does not identify minors charged in juvenile court, but Mays and Richmond have been widely identified in news coverage, and their names have been used in open court.

They were charged 10 days after the party, after a flurry of social media postings about the alleged attack led the girl and her family to go to police.

Steubenville officials have protested that outsiders have unfairly criticized police handling of the case and have given Steubenville a black eye. Officials created a website to counter misinformation about the case, refuting, for example, the allegation that the police department is full of ex-football players from the local powerhouse team, nicknamed Big Red.

Hacker activists have publicized tweets and other social media postings made the night of the alleged rape, including a 12-minute video in which one student joked about the alleged attack while others in the background chimed in.

The National Organization of Women has demanded that the student be charged under the state's "failure to report" law. Attorney General Mike DeWine has called the video disgusting, but said the student didn't have first-hand knowledge of the alleged incident.

A West Virginia judge's ruled last week that three juvenile witnesses there could not be compelled to testify in the Ohio case. The juveniles' testimony was expected to bolster the players' defense against the charges.

On Monday, attorneys representing Mays argued in a motion to dismiss the case that one of the witnesses was a friend of the girl's and can testify to the alleged victim's alcohol intake and relationship with Mays.

They say the witnesses have participated in videotaped or documented interviews with Steubenville police and have offered statements that would support their client's position that he did not rape the girl.

The attorney for Richmond filed a motion Monday saying that further prosecution of Richmond violates his due process and equal protection rights and asks the judge or state to dismiss the case.

"You have case where it's clear — clear — that basic, fundamental, constitutional guarantees are not available to this child, my client, to put on a defense," Walter Madison told The Associated Press on Tuesday. "As such, it is patently unfair and un-American to continue knowing that that is not available."

Bob Fitzsimmons, a lawyer for the girl's family, said, "The family wants this matter over so they can move on with their lives and their daughter's healing."

In an order last week, Hancock County Judge Ronald Wilson ruled that no legal case was cited from anywhere in the country to support the argument that the three West Virginia juveniles can be compelled to testify in Ohio.

Ohio and West Virginia law is different for a juvenile delinquency hearing compared to a criminal trial, Wilson said in the four-page ruling on March 6.

Dozens of witnesses for both sides are expected to testify at the trial. Their testimony is considered crucial because the girl was severely intoxicated that night and appeared to be passed out at times, according to several witnesses. She is not expected to testify herself.