Decades after Nixon fired the first salvo, most everyone agrees it's time for a truce. And still the battle rages 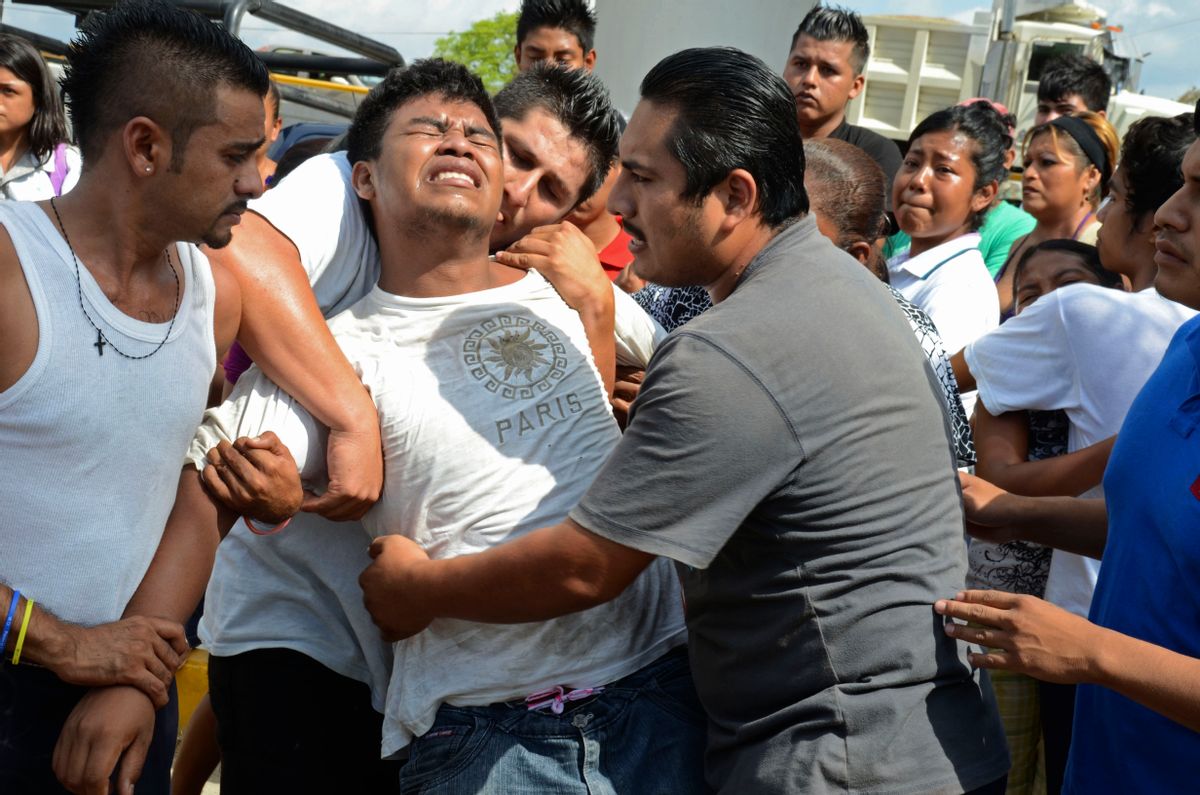 A distraught relative is held back after three men on a public bus were killed by unknown gunmen in the Pacific resort city of Acapulco, Mexico, Monday March 1, 2013. (AP/Bernandino Hernandez)
--

BOSTON — The global drug war is arguably America’s longest armed conflict, declared 42 years ago and still raging at a pace that would startle many citizens.

It is waged daily, on farmland and streets from Colombia to Mexico to Detroit. It has put millions of people behind bars,  and has dramatically influenced our culture and worldview.

By some estimates, it has cost the nation more than $2 trillion dollars.

Less than a year after he fired the first salvos, Nixon's Republican-led Shafer commission sought to calm Americans and temper the president’s claims.

The Shafer commission concluded that the drug problem would “not collapse our society,” and noted that “the compulsive use of alcohol remains the nation’s most serious drug problem.” It cautioned against a “drug abuse industrial complex,” that could perpetuate the problem, and called for a review of programs that might be doing more harm than good.

It even recommended abolishing penalties for private use and possession of cannabis.

Nixon ignored these conclusions, and the nation forged on with a strategy that increasingly emphasized force over treatment.

Most leaders since Nixon have doubled down on that strategy. Even President Barack Obama – who initially promised change, and who allegedly pioneered “roof hits” as a student — has merely tinkered with Washington’s interdiction-oriented program. He continues to ask Congress for billions of dollars in support of overseas eradication.

Drug hawks contend that this is a good thing. They say prohibition is working, especially when compared with the record for legal drugs.

Condemnation of the drug war has gone mainstream. Conscientious citizens have concluded that the collateral harm inflicted by the drug war exceeds the benefits that it may yield.

Voters in Colorado and Washington demonstrated this, with their November 2012 referenda calling for legalization of marijuana. According to a 2010 Pew Research poll, three-quarters of Americans now favor legalized medical marijuana. A sizeable minority, 41 percent, support full legalization.

There is no denying that drug abuse is serious problem, and that society needs to pursue policies to minimize harm. Evidence is emerging that even marijuana, widely considered the most bening of intoxicants, can cause cognitive and neuropsychological impairment.

The trouble is, there’s little evidence that prohibition and harsh criminal penalties are having a meaningful impact. Yet the strategy is arguably inflicting an unacceptable collateral toll on society.

To put it another way, “The public does not like marijuana,” as Brian Vicente, a Denver attorney who co-wrote Colorado’s “Regulate Marijuana Like Alcohol Act of 2012,” told Rolling Stone after voters approved it. “What they like is community safety, tax revenue and better use of law enforcement.”

The statistics are staggering.

This massive prison population exacts a huge cost on families, neighborhoods, and taxpayers. Meanwhile, it hasn’t significantly affected the flow of drugs, because for each trafficker thrown in prison, others seem remain ready to their luck at this risky trade.

The drug ban has also given rise to a vast  global black market, estimated to be worth $320 billion.  This market empowers criminals, and provides lucrative opportunities to anyone with the requisite job skills: a willingness to harm children, break the law and resort to violence. The illicit trade has transformed neighborhoods — from Baltimore to Detroit to East L.A. — into battle zones, where innocent citizens live in fear of violence and shady dealers.

While Americans have long blamed this urban blight on drugs, experts increasingly regard prohibition as the main culprit. “Prohibition creates violence because it drives the drug market underground. This means buyers and sellers cannot resolve their disputes with lawsuits, arbitration or advertising, so they resort to violence instead,” writes Harvard lecturer and Cato Institute fellow Jeffrey A. Miron. “Violence was common in the alcohol industry when it was banned during Prohibition, but not before or after. Violence is the norm in illicit gambling markets but not in legal ones…. Violence results from policies that create black markets, not from the characteristics of the good or activity in question.”

At a time when government debt in the US is soaring, prohibition costs taxpayers dearly. In California, prison expenses leapt from 3 percent of the state budget in 1980 to nearly 11 percent by 2010; education fell from 10 to 7.5 percent in the same timeframe.

In a 2010 study, Miron estimated that full legalization could save taxpayers $41.3 billion each year, currently spent on enforcing prohibition. Additionally, taxing drugs at rates common to tobacco and alcohol would yield government revenues of $46.7 billion — yielding a total benefit of more than $85 billion each year.

Washington’s drug strategy claims victims not just within US borders, but globally where it has aggressively imposed its drug strategy. It has done this in part by demanding prohibition as a prerequisite for foreign assistance, and in part by using United Nations conventions to compel others to ban drugs, including marijuana. As a result, even countries like Pakistan, Egypt and Cambodia that have long-standing traditions of marijuana use have been forced to ban the drug.

Some governments have elected to appease Washington by passing laws — even draconian ones — and then quietly ignoring them. But the US also compels countries, particularly in Latin America, to crack down on drug cultivation, resulting in a “terrible escalation in drug-related violence, corruption and gross violations of human rights,” as former President Jimmy Carter wrote in a NY Times op-ed.

The track record of such overseas eradication offensives demonstrates how difficult it is to staunch the flow of intoxicants. Since 2000, the US has spent more than $7 billion to crack down on Colombian cocaine, an effort that yielded several druglords. Nonetheless, Colombia remains the world’s biggest supplier of the drug. Efforts to fumigate great expanses of its coca crop have apparently led to an herbicide resistant variety, as well as an expansion in acreage under cultivation.

As Colombia became increasingly hostile, the market simply adapted. Coca cultivation shifted to Peru and Bolivia, and trafficking through Mexico surged. Beginning in 2006, the Mexican government launched an offensive that has left 70,000 dead, but merely concentrated power in the hands of the fabulously rich Sinaloa cartel. And as other Mexican cartels suffered setbacks, trafficking has escalating through Central America, where violence is surging.

Just as the Shafer Commission warned, the US’s anti-smuggling apparatus has grown into a sprawling, multinational behemouth. The Drug Enforcement Agency currently has 86 officesin 67 countries. The Pentagon also plays an active role. The US Army, Navy, and Air Force routinely chase traffickers, in what has become a militarized assault costing more than $20 billion in the past decade.

The offensive has hardly eased under President Obama. In 2011 alone, US pilots clocked more than 46,000 hours in anti-drug missions, and the US authorized a record $2.8 billion sale of guns, satellites, radar equipment and tear gas to Western Hemisphere countries, four times the figure a decade earlier, according to an analysis of drug war strategy by the Associated Press.

Despite the high costs and the global battle, there’s strong evidence that the current strategy simply isn’t achieving its objectives.

A principal goal of prohibition is to keep drugs away from kids. But for teens, getting high appears to be as easy as ever. Over the past 35 years, the portion of high school seniors saying that cannabis was “easy” or “very easy” to obtain has remained over 80 percent.

Youth drug use has also remained stubbornly common. In 1975, about 40 percent of high school seniors reported having smoked marijuana in the past 12 months. With the exception of a drop from 1986 to 1992, that rate has barely budged. In 2012, more than 36 percent of twelfth graders said that they had consumed marijuana in the past year; a stunning one-in-four consumed an illegal drug in the previous 30 days. A major emerging problem is that via the internet and their parents' medicine cabinets, children have access to a cornucopia of new intoxicants.

Another key goal of drug law enforcement is to disrupt the supply chain, driving prices up and usage down. But despite the billions spent, the international offensives and the swelling prison population, drugs prices are falling. The street price of cocaine has dropped from $278 per gram in 1980 to $169 in 2010, according to the US office of National Drug Control Policy (both figures are in 2010 dollars, and adjusted for purity). Likewise, heroin has fallen from $1,031 per gram in 1980 to $450 in 2010. Marijuana price data are less reliable (due largely to potency variations), but it is safe to say that getting stoned remains cost-competitive or even economical compared to acquiring a social buzz from alcohol.

With such high costs, and so little evidence of success, reform almost seems inevitable. Indeed, executives and prominent political leaders with no stake in drug culture are lending their prestige to the call for reform. “The global war on drugs has failed, with devastating consequences for individuals and societies around the world,” concluded a June 2011 report published by the Global Commission on Drug Policy. The report noted that between 1998 and 2008, global consumption of opiates had increased 34.5 percent, cocaine 27 percent and cannabis 8.5 percent.

The Global Commission’s leaders are not exactly a cabal of Deadheads; They include former UN Secretary General Kofi Annan, former Republican Secretary of State George Shultz, former Fed Chairman Paul Volcker and a handful of ex-heads of state.

But so far, the pace of change is glacial. Despite with state laws legalizing medical and recreational marijuana, this least addictive of drugs is strictly banned by the federal government. Politicians appear reluctant to risk enacting new policies that might appear to put teens and other vulnerable members of society at risk, even if the status quo is a costly failure.

Part of the problem is “inertia,” says Peter Reuter, a drug policy expert at Rand and the University of Maryland. “Change on major policies tends to happen in response to crises or in narrow windows of political opportunity.” Another issue, he says, is that the communities affected by the current strategy tend to be poor and lack political power.

Even if opinions are shifting, the drug war’s reckoning day apparently hasn’t yet arrived.