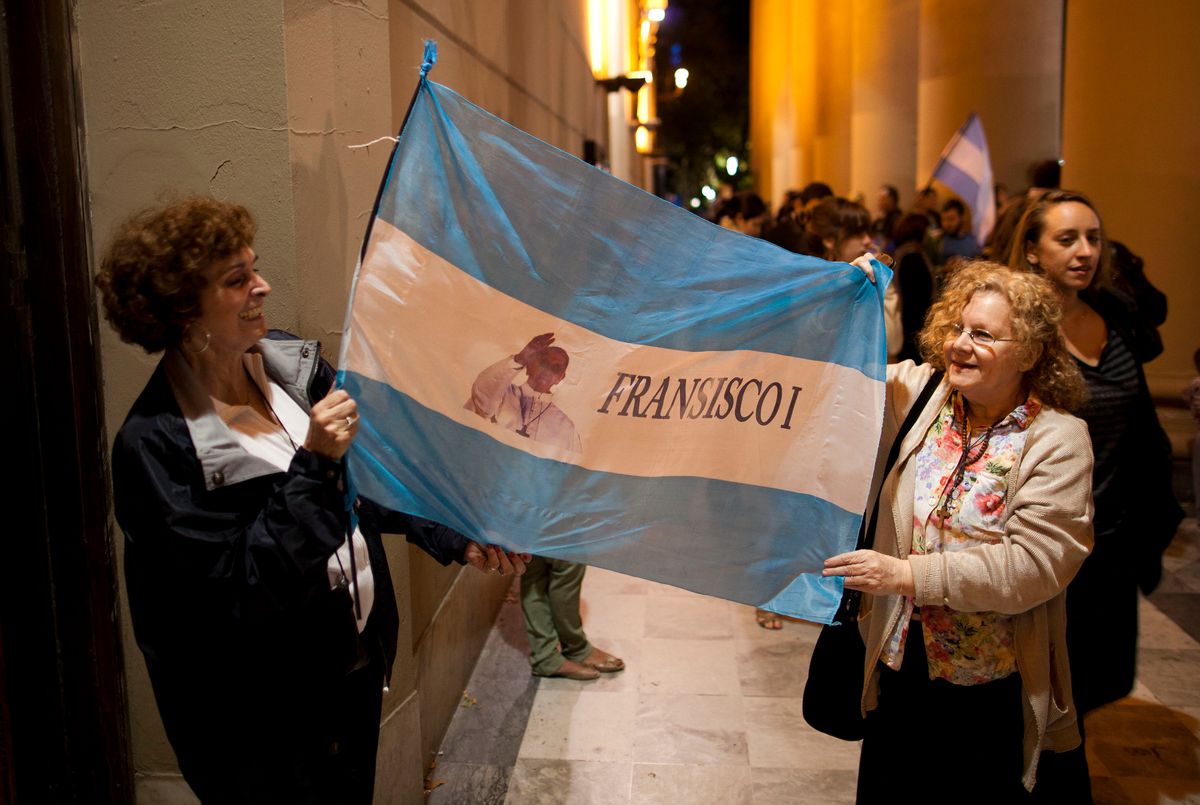 Faithful hold up an Argentine flag with an image of Buenos Aires' Archbishop Jorge Bergoglio that reads in Spanish "Francisco I" outside the Metropolitan Cathedral as people gather in Buenos Aires, Argentina. (AP/Ivan Fernandez)
--

BUENOS AIRES, Argentina (AP) — Pope Francis is known for his humility, his reluctance to talk about himself. The self-effacement, admirers say, is why he has hardly ever denied one of the harshest allegations against him: That he was among church leaders who actively supported Argentina's murderous dictatorship.

It's without dispute that Jorge Mario Bergoglio, like most other Argentines, failed to openly confront the 1976-1983 military junta while it was kidnapping and killing thousands of people in a "dirty war" to eliminate leftist opponents.

But the new pope's authorized biographer, Sergio Rubin, argues that this was a failure of the Roman Catholic Church in general, and that it's unfair to label Bergoglio with the collective guilt that many Argentines of his generation still deal with.

"In some way many of us Argentines ended up being accomplices," at a time when anyone who spoke out could be targeted, Rubin recalled in an interview with The Associated Press just before the papal conclave.

Some leading Argentine human rights activists agree that Bergoglio doesn't deserve to be lumped together with other church figures who were closely aligned with the dictatorship.

"Perhaps he didn't have the courage of other priests, but he never collaborated with the dictatorship," Adolfo Perez Esquivel, who won the 1980 Nobel Peace Prize for documenting the junta's atrocities, said Thursday. "Bergoglio was no accomplice of the dictatorship. He can't be accused of that," Perez Esquivel told Radio de la Red in Buenos Aires.

Other activists are angry over the positions Bergoglio, 76, has taken in recent years, as Argentina pursues investigations aimed at exposing those responsible for killing as many as 30,000 people, and finding traces of their victims. Some say he's been more concerned about preserving the church's image than providing evidence for Argentina's many human rights trials.

"There's hypocrisy here when it comes to the church's conduct, and with Bergoglio in particular," said Estela de la Cuadra, whose mother co-founded the Grandmothers of the Plaza de Mayo activist group during the dictatorship to search for missing family members. "There are trials of all kinds now, and Bergoglio systematically refuses to support them."

Bergoglio twice invoked his right under Argentine law to refuse to appear in open court in trials involving torture and murder inside the feared Navy Mechanics School and the theft of babies from detainees. When he eventually did testify in 2010, his answers were evasive, human rights attorney Myriam Bregman told the AP.

Bergoglio's own statements proved church officials knew from early on that the junta was torturing and killing its citizens even as the church publicly endorsed the dictators, she said. "The dictatorship could not have operated this way without this key support," she said.

Rubin, a religious affairs writer for the Argentine newspaper Clarin, said Bergoglio actually took major risks to save so-called "subversives" during the 1976-1983 dictatorship, but never spoke about it publicly before his 2010 biography, "The Jesuit."

In the book, Bergoglio wrote that he didn't want to stoop to his critics' level — and then shared some of his stories. Bergoglio said he once passed his Argentine identity papers to a wanted man with a similar appearance, enabling him to escape over the border to Brazil, and added that many times he sheltered people inside church properties before they were safely delivered into exile.

The most damning accusation against Bergoglio is that as the young leader of Argentina's Jesuit order, he withdrew his support for two slum priests whose activist colleagues in the liberation theology movement were disappearing. The priests were then kidnapped and tortured at the Navy Mechanics School, which the junta used as a clandestine prison.

Bergoglio said he had told the priests — Orlando Yorio and Francisco Jalics — to give up their slum work for their own safety, and they refused.

"I warned them to be very careful," Bergoglio told Rubin. "They were too exposed to the paranoia of the witch hunt. Because they stayed in the barrio, Yorio and Yalics were kidnapped."

But Yorio later accused Bergoglio of effectively delivering them to the death squads by declining to publicly endorse their work. Yorio is now dead, and Jalics has refused to discuss these events since moving into a German monastery.

Both priests were eventually dropped off blindfolded in a field after a harrowing helicopter ride, two of the few detainees to have survived that prison.

Rubin said Bergoglio only reluctantly told him the rest of the story: that he had gone to extraordinary, behind-the-scenes lengths to save them.

Then in his 30s, the Jesuit leader persuaded the family priest of feared dictator Jorge Videla to call in sick so that he could say Mass instead. Once inside the junta leader's home, Bergoglio privately appealed for mercy, Rubin wrote.

"Fortunately, a while later they were freed, first because they couldn't accuse them of anything, and second, because we moved like crazy people. The very night that I learned of their kidnapping, I began moving" to save them, Bergoglio recalled. All this was done in secret, at a time when other church leaders were publicly endorsing the junta and calling on Catholics to restore their "love for country" despite the terror in the streets. And other members of the slum church who were captured along with the priests were never seen again.

"It's a very sensitive subject," Rubin told the AP. "The Argentine church was one of the most conservative in Latin America. It showed a good disposition toward the military authorities, who, to make matters worse, considered themselves Christians and called themselves good Catholics."

Within the church hierarchy at the time, there were about 50 bishops, and most were conservatives. Some were very progressive, and ended up killed. Bergoglio was somewhere in the middle, Rubin suggested.

"There were some who were in it up to their necks," he said, citing Christian Federico von Wernich, who served as a police chaplain then and is now serving a life sentence for torture and kidnapping.

"There were those who risked it all to openly challenge the junta, and some of those ended up dead," Rubin added, among them Bishop Enrique Angelelli who was killed in a suspicious traffic accident in 1976 while carrying evidence about two murdered priests.

Rubin says activists closely allied with the government of President Cristina Fernandez "have tried to insert Bergoglio into some human rights trials, even when he truly shouldn't be."

On the other hand, activists say the Argentine church waited far too long to apologize for its human rights failures, and has yet to identify those responsible for many human rights violations that the church was aware of at the time.

Bergoglio was named Buenos Aires cardinal in 2001. But it wasn't until 2006, after then-President Nestor Kirchner declared an official day of mourning for Angelelli on the 30th anniversary of his death, that Bergoglio called him a "martyr" in the church's first official recognition that the bishop was murdered.

Under Bergoglio's leadership, Argentina's bishops also issued a collective apology in October 2012 for the church's failures to protect its flock during the dictatorship, but the statement blamed the era's violence in roughly equal measure on both the junta and its enemies.

"Bergoglio has been very critical of human rights violations during the dictatorship, but he has always also criticized the leftist guerrillas; he doesn't forget that side," Rubin said.

Bergoglio also was accused of turning his back on the De la Cuadra family, which lost five relatives to state terror, including Estela's sister Elena, who was five months' pregnant before she was kidnapped and killed in 1977.

The family appealed to the leader of the Jesuits in Rome, who urged Bergoglio to help them. Bergoglio then assigned a monsignor to talk with police, who gave them a heartbreaking statement: The woman was a communist, and therefore doomed, but she had given birth in captivity to a girl. That baby, in turn, was given to a family "too important" for the adoption to be reversed.

Despite this evidence in a case he was personally involved with, Bergoglio testified in 2010 that he didn't know about any stolen babies until well after the dictatorship was over.

"Bergoglio has a very cowardly attitude when it comes to something so terrible as the theft of babies," Estela de la Cuadra told the AP. "The question is how to save his name, save himself. But he can't keep these allegations from reaching the public. The people know how he is."