Your tap water is probably laced with antidepressants 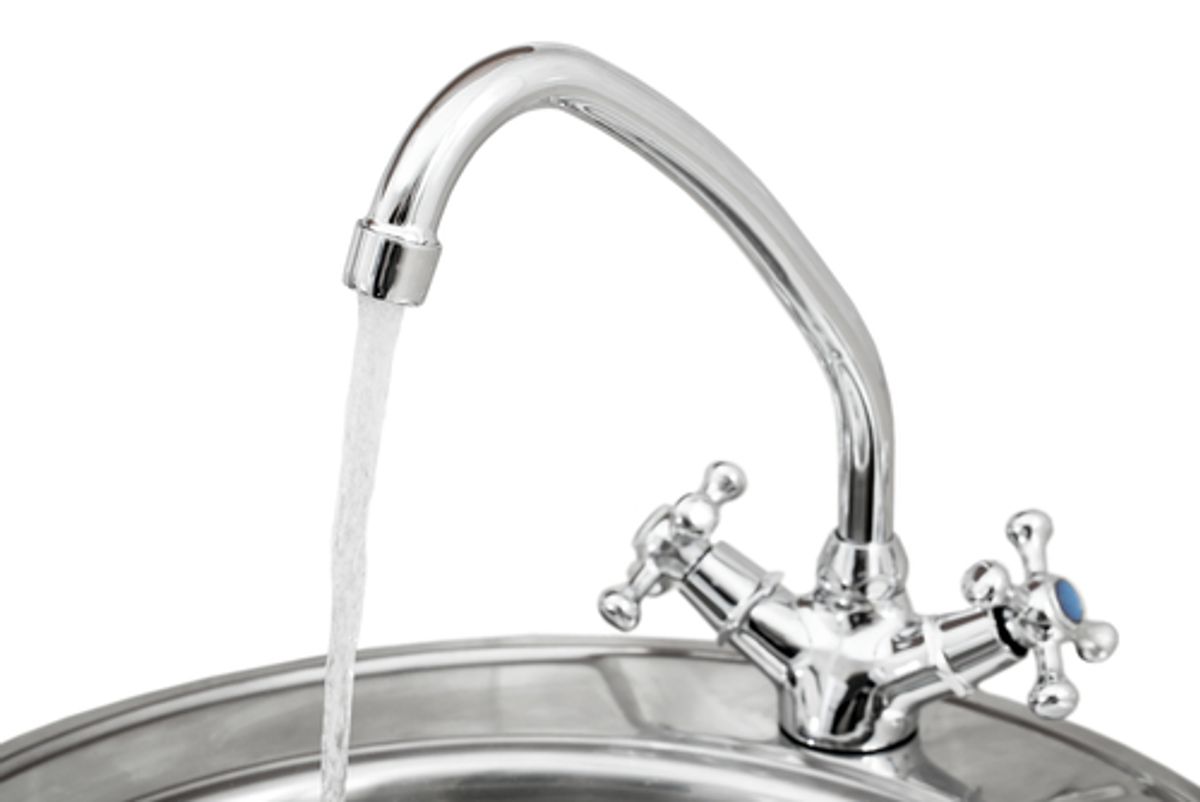 The idea that we’re being unwittingly drugged when we drink a glass of ordinary tap water smacks of dystopian science fiction or political conspiracy theory. Accusations that Communists were spiking America’s water with sedatives—under the cover of the federally instituted fluoridation program—were such a staple of Cold War–era paranoia that Stanley Kubrick satirized it in his 1964 masterpiece, Dr. Strangelove. While such fear-mongering may seem quaint, what’s truly ironic is that Americans today are consuming prescription drugs—including addictive psychoactive ones—via the water supply. Who knew?

There’s a good chance that if you live in an urban area, your tap water is laced with tiny amounts of antidepressants (mostly SSRIs like Prozac and Effexor), benzodiazepines (like Klonopin, used to reduce symptoms of substance withdrawal) and anticonvulsants (like Topomax, used to treat addiction to alcohol, nicotine, food and even cocaine and crystal meth). Such are the implications of environmental studies that have been leaking out over the past decade. Whether or not this psychoactive waste has any effect on the human nervous system remains unclear, but when such pharmaceuticals are introduced into the ecosystem, the fallout for other species is demonstrable—and potentially dire.

There's no mystery to the way prescription medications wind up in our tap water. Whether you flush a bottle of old pills down the toilet or, more likely, excrete the remains of a daily dose (an estimated 80% isn’t broken down in our bodies), active chemicals get recycled back into reservoirs because sewage treatment plants aren’t able to filter them out. “They just fly right through,” says Michael Thomas, an associate professor of bioinformatics at Idaho State University.

Although government officials and scientists are in no rush to look into this potential threat, some environmentalists are becoming worried. In a preliminary study at the University of Idaho, fathead minnows were plunked in water spiked with a combination of SSRIs and anticonvulsants—a lab version of American tap water. After swimming in the contaminated water for 18 days, the minnows exhibited 324 genetic alterations associated with human neurological disorders, including autism.

Mutated minnows admittedly do not signal a hazard of global-warming dimensions. Yet messed-up genes are what cause disease. Studies have shown that regular doses of SSRIs can sometimes damage human DNA, most notably in sperm. The minnows offer evidence that even trace amounts of SSRIs can infiltrate DNA. For now, the implications for humans of ongoing exposure can only be extrapolated from the effects on wildlife: According to a 2008 AP investigation, trace pharmaceuticals already contaminate a wide variety of species, from algae on up to mammals.

The peculiarities of sedative-fed perch were highlighted last month in a front- page article in The New York Times. The fish had been fed trace doses of oxazepam—a benzodiazepine commonly used in Europe—over a period of two months, as part of a Swedish study. The fish exposed to the anti-anxiety medication socialized less but ate more zooplankton and swam further, behaviors with potential long-term consequences for local ecosystems. This sparked fears among environmentalists that under the influence, the fish are more susceptible to predators, which could weaken the strength of the species. Not mentioned in the Times piece is the fact that SSRIs have been detected in plankton, which are a “foundation” organism in the food chain. “It's inescapable,” Sudeep Chandra, an associate professor of natural resources and environmental science at the University of Nevada, told the AP. “There’s enough global information now to confirm [trace pharmaceuticals] are affecting organisms and wildlife."

This drugs-in-our-drinking-water issue has remained mostly below the radar of the government, researchers and the media. The AP chalked up the lack of focus on the issue partly to government agencies' and nonprofits' wariness about stoking public fear. "It's a hard topic to talk about without creating fear in the general public,”said the Water Research Foundation’s Robert Renna.

While the federal Environmental Protection Agency (EPA) mandates that other kinds of contaminants, such as pesticides and lead, be filtered out before our drinking water flows through a municipal tap, there remain no guidelines at all for pharmaceuticals, despite the fact that as far back as 2000, a US geological survey found low levels in 80% of the rivers and streams sampled. Nor is much funding available for even rudimentary studies of this potential public health problem.

The EPA does not even track the statistics collected by the few municipalities that do surveillance. In 2008, after surveying results from the municipalities that did test, the AP found over 50 pharmaceuticals that “could harm humans” in the water of 41 million Americans. Because most cities don’t test—and those that do generally refuse to release their findings, citing “security concerns” —the actual number of affected people is almost certainly much higher. “I think we have a lot of work to do,”said the EPA’s Benjamin Grumbles.

The problem is not restricted to the US. Over a hundred trace pharmaceuticals have been detected in waterways around the globe, from Pakistan to Finland. But the highest concentrations of drug pollution by far are here at home, where nearly half the population is on at least one prescribed medication. The 10% of Americans who take antidepressants (mostly SSRIs) accounted for 255 million scripts in 2010. With all that runoff, you might think Americans would be happier—and less addiction prone—than they are.

In Britain, where psychoactive drugs are prescribed at a fraction of US levels, a 2004 Environment Agency study cited “low-level, almost continuous discharge” of Prozac through the tap water there. Parliament member Norman Baker stated ominously, “This looks like a case of hidden mass medication upon the unsuspecting public.” Yet no US municipalities have done similar measurements that quantify the amount of each drug detected. It’s reasonable to assume, however, that consistent quantities of trace antidepressants flow through American taps—especially since fish collected in fresh-water bodies near several urban centers have tested positive for these contaminants.

New York City is widely believed to have the nation's cleanest tap water, which is supplied from protected upstate reservoirs. The feds consider these reservoirs so pure that the Big Apple’s H2O is not required to be filtered. As far as is known, no official agency has tested the city’s water supply for pharmaceuticals. Yet a 2008 study by Stony Brook University found a number of sedatives and anti-depressants in upstate waterways that feed the reservoirs. A just-released study by the Citizens Campaign for the Environment found that contrary to public health guidelines, over 50% of the medical facilities in nearby Suffolk County flush their unused meds down the toilet.

Because pharmaceutical compounds make their way into the watershed itself, private wells are also affected; as for the bottled stuff, it's no purer than most tap water because it comes from the same water sources. If prescription medications are being passed into the water supply, it follows that some illegal drugs must take the same route, although in substantially lower quantities. Sure enough, a Spanish study found cocaine in 22 of 24 random samples of that country’s tap water and an Italian study found cocaine flowing through the Po River.

The future social and ecological fallout, if any, from the drugs in our drinking water is impossible to foresee. But in the short term, within the 12-step community, the issue could have a special resonance. Many AA members believe that true sobriety requires abstinence from all mood-altering drugs, whether addictive (like benzodiazepines) or not (like antidepressants). A pamphlet issued by AA’s General Services Conference warns that it’s “generally accepted” that these meds can “threaten the maintenance of sobriety.” But given the prevalence of these substances in the water supply, it appears that you can’t even drink a glass of good, old tap water without going off the wagon. Where does that leave people who believe in a literal interpretation of the Big Book? Crossing Italy and Spain off the travel itinerary is easy enough. It may also be time, for sanity’s sake, to take another look at what “total abstinence” means.