Leaning in won't help your career

If you want a better job, unionize 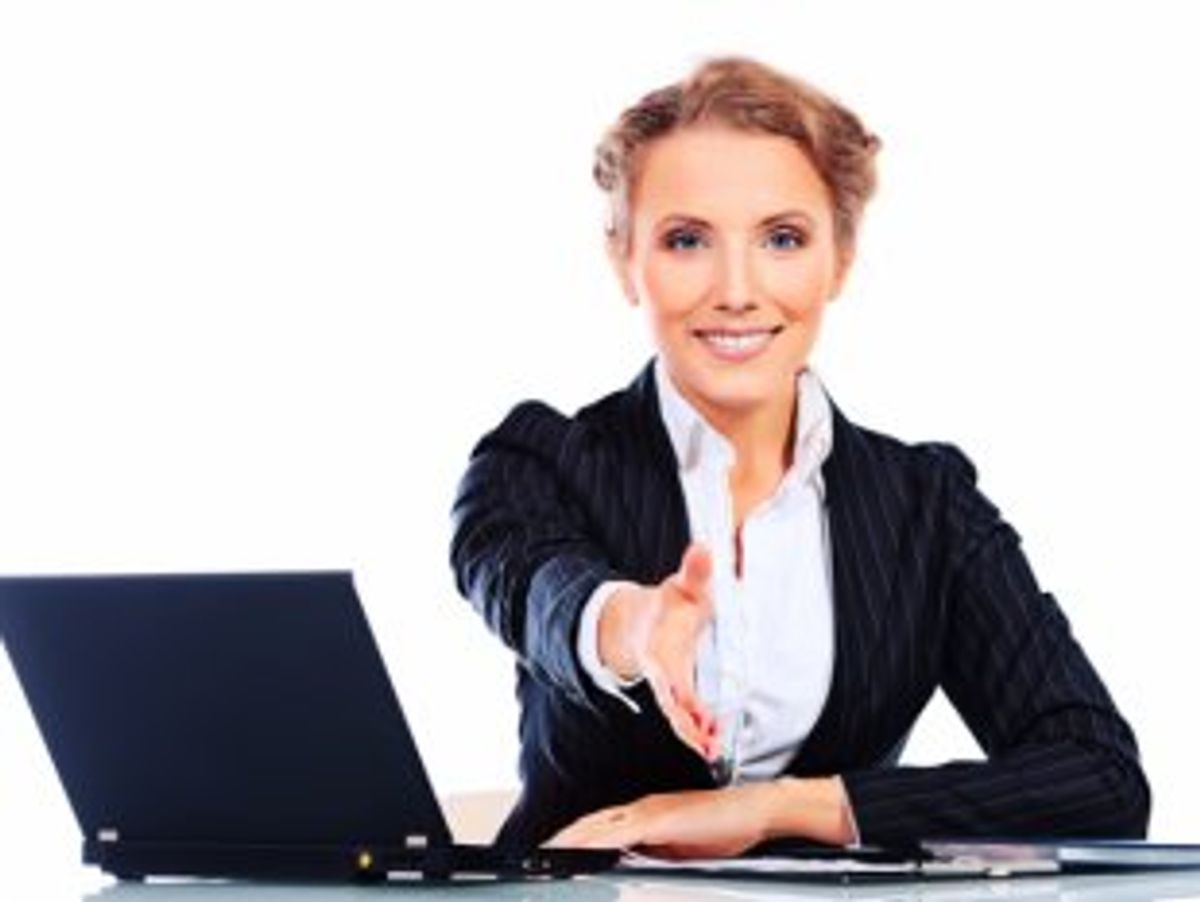 OK, Facebook executive Sheryl Sandberg didn’t say “join a union.” But that’s the message the vast majority of working women should be considering this Women’s History Month. The best way for the most women to improve their working lives is through a union.

The new PBS documentary Makers: Women Who Make America shows how the women's movement changed the workplace for women, men and families. Two of the young Makers highlighted in the film, Sheryl Sandberg at Facebook and Marissa Mayer at Yahoo, now dominate the news. Here's what neither of them tell you: union women earn more than non-union women and have better benefits and working conditions.

Women at Facebook and Yahoo should consider spending their time organizing to have a say in their workplace.

Lean In: Women, Work And The Will To Lead is in the bookstores and online this week. Author Sheryl Sandberg is chief operating officer of Facebook, a multi-millionaire, and the mother of two small children. She leaves work around 5pm to have dinner with her family. She wants to jumpstart the women’s movement, and her focus is on what women, especially those headed for the executive track, can do to remove internal barriers to their own success. Marissa Mayer, 37-year-old chief executive officer of Yahoo and new mother, answered the childcare question by adding a nursery next to her office. She also just ended telecommuting for Yahoo employees.

Sandberg's book rollout is indicative of just how far women have come: New York Times front-page story, “60 Minutes” interview, Time magazine cover spread,Cosmopolitan supplement, a book party hosted by New York City Mayor Michael Bloomberg. She has generated so much debate that there is already a review of the discussionin the New Yorker. During this 50th-anniversary year of TheFeminine Mystique, Betty Friedan would be proud.

Mayer has stirred a renewed debate on the benefits and costs of employees having flexibility over their hours at work and the ability to work away from the office, considered an important policy advance especially for single mothers and dual career parents. The current debate centers around productivity, possibly improved by telecommuting, and innovation, said to be harmed by the absence of face time, collaboration and casual office interaction.

These smart, competent, extraordinarily successful women are reenergizing an important discussion about women at work. They are a welcome addition to a renewed commitment to women’s equality in the workplace. But dignity and respect, as well as programs and policies that fit the needs of diverse women, will not likely come from women in the executive suite, any more than they have come from men in the front office. They will come from women workers, backed by strong legislation, joining together in unions and negotiating for themselves. We need to seize this opportunity.

Women have a right to equal access and treatment in the most elite jobs, but their issues, barriers and strategies for change differ from those for women striving to become electricians and firefighters or for home health aides and waitresses working their way out of poverty. As labor historian Dorothy Sue Cobble has eloquently documented, in the 1960s there was the “other women’s movement” led by labor feminists. Betty Freidan built the National Organization of Women not only on The Feminine Mystique, but on decades of work by union women who advocated on their agenda for the creation of President Kennedy’s Commission on the Status of Women. Led by union women, theAmerican Women Report was issued in 1963 and documented the issues women faced including employment discrimination, lack of childcare services, and race discrimination.

By 1965, Betty Freidan was frustrated that things were moving too slowly. Implementation of new laws like the Equal Pay Act of 1963 and Title VII of the 1964 Civil Rights Act prohibiting sex discrimination in employment needed powerful forces for change. When the National Organization of Women was formed, Caroline Davis and Dorothy Haener of the United Automobile Workers and Catherine Conroy of the Communication Workers of America were at the table. For the first year and a half the UAW provided an office and support services for NOW.

There were differences over goals and strategies. Many labor feminists left NOW and in 1973, over 3,000 union women met in Chicago and formed the Coalition of Labor Union Women. Olga Madar, UAW, was elected president. Addie Wyatt, the first African American woman elected vice-president of a major union, the Amalgamated Meat Cutters Union, became first vice-president. Joyce Miller, Amalgamated Clothing Workers of America, became CLUW president in 1979 and was the first woman to take a seat on the AFL-CIO executive council.

These women were not coming late to the women’s movement. They were continuing on a path started at the end of World War II. Their goal was equality, but this meant respecting their differences as well. There were still disagreements among them, but according to Cobble, “they wanted equality and special treatment, and they did not think of the two as incompatible.” They fought at the bargaining table and in the legislature for equal pay, family and medical leave, childcare, and an end to discrimination and sexual harassment.

The union road has not been smooth. Unions have not always been at the forefront of struggles for gender equity and several unions have been sued for discrimination along with the employers. When women entered the male world of construction work, for example, their triumphs of mastering a trade and the all too familiar stories of a hostile work place, often dangerously so, were documented by tradeswomen like Molly Martin (Hard Hatted Women) and Susan Eisenberg (We’ll Call You If We Need You).

Today, women are almost half of all union members. Liz Shuler of the International Brotherhood of Electrical Workers serves as the first woman and the youngest person to become secretary-treasurer of the AFL-CIO. Mary Kay Henry, a healthcare organizer, is president of the 1.9-million-member Service Employees International Union. Randy Weingarten, a lawyer and educator, is president of the 1.5-million-member American Federation of Teachers. Rose Ann DeMoro, director of National Nurses United, was ranked one of the 100 most influential people in the healthcare field by the industry publication Modern Healthcare.

New organizations are also emerging and working with unions using multiple strategies and approaches. Ai-jen Poo leads the National Domestic Workers Alliance. Organizing the women who care for our children, parents, neighbors, and homes, she championed the New York State Domestic Workers Bill of Rights. Saru Jayaraman co-founded Restaurant Opportunities Centers-United, works with community groups and unions to bring justice and respect to workers in the low-wage restaurant industry. Seven of 10 lowest paying jobs in the country are found in the food service industry.

Next month over 500 tradeswomen will gather in Sacramento for the annual “Women Building California and the Nation Conference” with workshops and strategy sessions: carpenters, iron workers, electricians, green job technicians. One of the organizers is Carolyn Williams, International Brotherhood of Electrical Workers, and a pioneer tradeswoman who chairs the AFL-CIO Building and Construction Trades Department Committee on Women in the Trades. Yet women remain less than 3% of the skilled trades. Tradeswomen need enforcement of the existing laws prohibiting discrimination in employment, banning sexual harassment, establishing hiring goals, and expanding outreach and training programs especially for government contractors.

In short, the “other women’s movement” is alive and fighting. Unions, advocacy groups, and community organizations pursue strategies that include lawsuits, demonstrations, leadership training, mentoring programs, media skills workshops, and organizing. What this year’s Women’s History Month can do is expand the conversation beyond the executives of Facebook and Yahoo and the Fortune 500 to look at workplace issues for our mothers, sisters and daughters in the jobs that support us every day.

“Leaning in” might well help get more women into the top echelons of the corporate world and that is progress for equality. Sheryl Sandberg sets an important precedent by going home for dinner with her family, but can a non-management worker at Facebook do the same?

What I found most troubling about Marissa Mayer’s decision at Yahoo was not the merits of telecommuting, but the way in which this new high-tech company was able to make such an important decision in such an old-fashioned top-down way, apparently without input from employees. While having more money and great perks are important, in the area of negotiation, dignity and respect, Yahoo seems little different than workers at Walmart. Democracy at work, the right to join a union and have a voice in decisions that affect you every day on the job, has been established as a fundamental human right in the Universal Declaration of Human Rights. Yahoo workers need a union.

In 1936, First Lady Eleanor Roosevelt wrote in her My Day column that there were only two ways to bring about protection for workers -- “legislation and unionization.” She explained to delegates at the United Nations that unions were a “fundamental element” of democracy. Sisters can cheer on the struggle for equality among the CEOs, but also use that struggle to remind people of what is needed in the “other women’s movement.” We can seize this moment of discussion and organize.  s Eleanor Roosevelt told delegates to a CIO convention, “We can’t just talk. We have got to act.”