What about Rob Portman's daughter? 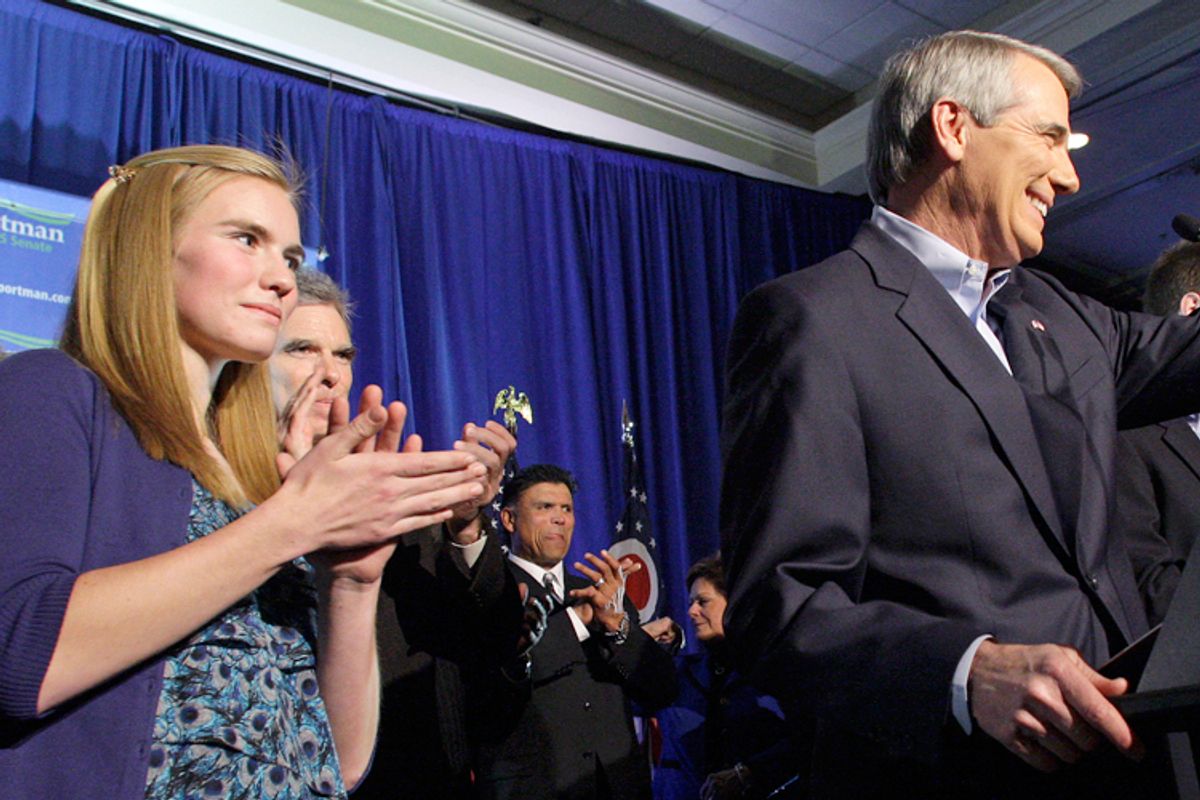 The analogies started rolling out minutes after Ohio publications went live with the news that Sen. Rob Portman now supports marriage equality because of his gay son. "Rob Portman comes out as vegetarian after watching Babe on DVD," joked one tweeter. On a more serious note, Steve Benen commented that he'd be happy to introduce Portman to Americans in poverty and to the African-Americans whose votes Republicans are seeking to suppress. He concluded, "It seems the key to American social progress in the 21st century is simple: more conservatives having more life experiences."

But here is a life experience Portman already has: He is married to a woman. He has a daughter. So do lots of people who oppose safe and legal abortion and better access to contraception. Some of them are even women. When it comes to reproductive rights, it appears, social empathy goes only so far.

Of all the disparate strategies for saving the Republican Party that have been offered so far, almost no one has suggested the party moderate its stance or focus on women's reproductive rights and access. (I say almost, because Dick Morris, to the extent that he counts, declared at CPAC yesterday that “single white women run screaming from the Republican Party, largely because of our pro-life position." Apparently even in Dick Morris' fantasy land of Mitt Romney's landslide win, women of color voting Republican is still a lost cause.) Despite last year's drubbing of candidates like Todd Akin and Richard Mourdock, the most we've heard so far in the soul-searching is that Republicans need to talk less about rape.

Indeed, possible party savior Marco Rubio seemed to be making up for his heresy on immigration reform by doubling down on culture war politics. “Just because we believe that life – all human life – is worthy of protection at every state of its development does not make you a chauvinist,” Rubio said. He added climate denialism for good measure: “In fact, the people who are actually close-minded in American politics are people that love to preach about the certainty of science with regards to our climate but ignore the absolute fact that science has proven that life begins at conception."

Rubio also included support for "traditional" marriage in his bromide, but that's losing any status as consensus within his party. (Dick Cheney told him to follow his heart!) Yesterday, Foster Friess, previously most notorious as a major supporter of Rick Santorum -- Rick "Man on Dog" Santorum -- told BuzzFeed that he has a gay brother-in-law and that the party needs to get its message straight on gay rights. "You've got people who are gay-bashers, who forget that these are human beings that need love just like all of us need love," he told Chris Geidner. "We have to be sensitive to that."

If you need any convincing that marriage has lost its salience as a wedge issue Republicans consider favorable terrain, consider how few of them publicly indulged in homophobia in the last election season, even as they fulminated about rape victims and sluts. This is a political calculation at least as much as it is a moral one: Views on marriage equality are shifting rapidly in this country, while views on abortion are relatively hardened, and the fraying Republican coalition still depends on those abortion-obsessed social conservatives. Just ask Mike Huckabee and Bob Vander Plaats, who last month threatened to "run from this party" if it stinted on abortion. Huckabee said, "This issue cannot be moved off our platform and if it is, then I’ll meet you somewhere outside the tent and we’ll build a new one.”

Abortion and access to contraception often get lumped with marriage equality as "social issues," but there are reasons why they've played out differently. Take Portman's own reasoning in his Op-Ed this morning: "We conservatives believe in personal liberty and minimal government interference in people’s lives. We also consider the family unit to be the fundamental building block of society. We should encourage people to make long-term commitments to each other and build families, so as to foster strong, stable communities and promote personal responsibility." In other words, gay and lesbian people are joining what Portman considers to be, and has historically been, a conservative institution -- much like the military, where they'd already been serving in secret.

Although family planning used to be considered a conservative issue, there is still something more radical and terrifying about a woman not wanting to be a mother, or wanting to be a mother on her own terms. There will always be people who consider it the same as murder of a fully developed person in the world. There is still far more empathy for an embryo or fetus than for the living woman.

The issue is also profoundly economic. Friess famously told Andrea Mitchell that he didn't understand what the fuss was about contraception, since girls could just hold aspirin between their knees. Not all Republicans share Santorum's opposition to contraception in and of itself, but all of the ones who opposed making it more affordable through private insurance lacked the ability to imagine anyone finding it expensive. One in three women will have an abortion, but either these Republican politicians aren't being told about the choices of the women in their lives or they compartmentalize them as somehow justified or different. And the women in their lives probably aren't on Medicaid and are thus unaffected by the Hyde Amendment, and they can probably afford to pay out of pocket if their insurance refuses to cover abortion. Even before Roe, wealthy women had access to abortions, if with some difficulty. In the eyes of these men, it seems, not all women are created equal.