I was a 13 year-old star at CPAC in 2009. When I returned this week, I realized I wasn't the only one who'd changed 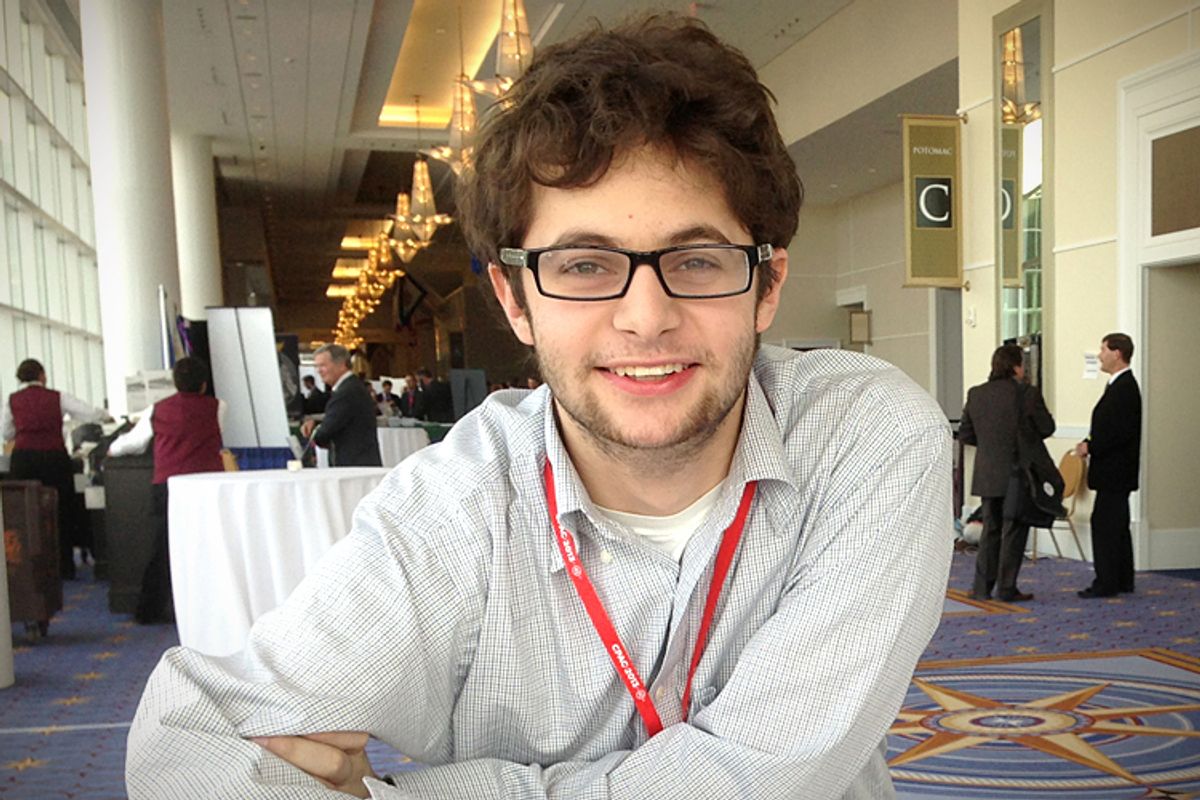 Does being back at CPAC, the annual gathering of conservatives from all over the country, feel weird?

That’s the question I got everywhere I turned these past few days. I suppose it was a natural question to ask, seeing as I had been a high profile speaker at the conference in 2009 as a thirteen year-old conservative wunderkind, before renouncing conservatism last year. So my return this year was an object of fascination to many.

The answer to the question is: No, it didn’t feel weird. I mean, I guess it should have, but it didn’t. In a way going back to CPAC seemed like going back home and visiting your old libertarian friend from high school: it’s pretty predictable, there’s a familiarity to the situation, you know the kind of stuff she’s going to say, you never know exactly how (or why) she says the stuff she says (and neither does she, in all likelihood), and so long as you don’t talk politics and just listen, you’ll be fine.

Still, there definitely were differences between this year’s CPAC and the conferences of the past, which may signify larger differences in the conservative movement more broadly.

Last time I attended CPAC, I remember seeing the Ron Paulers in full force. As soon as Congressman Paul (R-TX) arrived, it was like something out of A Hard Days Night: security had to escort Paul to the green room and then back out of the building afterwards. The room was packed whenever he came on stage, but, to be honest, his Young Americans for Liberty group seemed kind of too far-out for a lot of people -- even though they came in force the second time I went, even bringing along a pair of those inflatable Sumo-wrestling suits for their booth (don’t ask…I know I didn’t).

This time around, Paul’s son, Senator Rand Paul (R-KY), his “Stand With Rand” campaigners and today’s YA for Liberty all seemed far less hokey and weird, and much more a part of the mainstream.

The sleeker, more polished member of the Paul political franchise, Rand showed himself to be a more than capable campaigner. With his new (and free!) Stand With Rand t-shirts, buttons, wristbands, and campaign signs (which all look strangely like the cover art one might see on a White Stripes album) Rand Paul brought down the house at CPAC with arguably the best speech of the convention to one of the biggest (if not the biggest) crowd of the weekend. His insistence upon using the “stand” line over and over again (“stand for righteousness,” “stand with me”) gave it the sound of a campaign announcement or stump speech, while the abundance of overly-enthusiastic Paul staffers gave it the feel of a convention speech.

But most interestingly—to me anyway—was the fact that while the base of the Paul family’s support is almost entirely composed of young people, most of the Young Republicans I spoke to who voted for Rand in the straw poll actually told me they had never been (and still aren’t) fans of Ron Paul. When I asked them their reasoning, the almost universal reply by a country mile was: Rand is more polished and electable.

Something else that stood out as different between then and now is the exclusion of GOProud. When I attended CPAC in 2010—when GOProud was a sponsor and socially conservative groups threatened to boycott the event—attendees and speakers began picking sides, trying to decide whether to side with GOProud or the social conservatives. I remember hearing panelists and speakers getting on stage and stoically opening many of their remarks with, “I am (name) and I (do/do not) support GOProud.” The hate that this group got from so many people had an impact on me not long after I decided to start reconsidering my beliefs.

While there is still some didactic language regarding social issues, the whole social conservative cause seems to be getting less and less important to the movement, to be honest. The younger generation of 18-35 year olds (who composed 52% of the voters in the straw poll this year) seem to see gay marriage as not only no longer an issue worth fighting over, but one they think might be best for America as a whole. Even on abortion (where many adopt the old “leave it to the states” line) more and more of the young conservatives I talked to seemed to adopt the view that they are pro-life, but don’t believe they should impose that view on others.

Regardless of this shift, however, GOProud is banned from CPAC (in large part due to the efforts of ACU board member and powerful lawyer, Cleta Mitchell). This year, though, they got their own panel hosted by the Competitive Enterprise Institute (CEI), and featuring Washington Post’s Jennifer Rubin and even National Review who all came out in favor of gay marriage, saying it isn’t a necessary plank for Republicans anymore. The panel, entitled “A Rainbow on the Right” also included GOProud President Jimmy LaSalvia who gave a rousing speech, only to be rewarded by a stunning standing ovation at the end of the panel. There were no protesters (which one might expect at an event where stuff like this goes down) and most everyone I saw there seemed to beam with the knowledge that they were doing something a bit cheeky in the eye of the-powers-that-be at ACU (or maybe that was just their anticipation for the open bar in the back of the room after the event, I don’t know).

My favorite part of every CPAC, though, is the campaign button vendor in the exhibit hall. Four years ago when I first visited, the next time I visited, and even just two months ago when I covered the National Review Institute’s summit, this guy is always there. When I saw him at the NRI I half-jokingly told him to bring me some LBJ buttons for CPAC. I didn’t think he’d do it, but sure enough, there they were. (My favorite button he had on display this year was from William Jennings Bryan’s 1900 campaign which was a small, simple button with the open endorsement of a cigarette company on the bottom, which shows how far we’ve come.)

To me the most telling quote of any comparison between this CPAC and the last one I attended came from Jonah Goldberg on the “Rainbow” panel after he asked himself whether his support of gay marriage made him a RINO: “I’m okay with being called a RINO because I don’t take much pride in being called a Republican.” Unlike my previous CPAC experiences where everything seemed pretty much focused on being true conservatives, there seemed a genuine welcoming of some relatively minor change.

All in all, CPAC is the best annual political event of the year, every year (except for presidential election years because then it’s the party conventions). There is no denying this no matter what your political persuasion, and I can’t help but think that the next generation of conservatives will come kicking and screaming, and revitalize the party on social issues.

But let’s also think for a moment why the libertarian sector of conservatism is becoming more and more popular every CPAC: they provide the same old views on taxes, spending, regulation without the need to be beholden to anything else traditional. They’re more socially liberal and pretty modern on most other issues. This even applies to defense issues where it’s pretty easy to see the appeal for young conservatives of their social-justice-first, anti-war, anti-drone, anti-wiretapping agenda, over defense hawks and the like. (This also explains why “End the Fed”-type antics have less appeal to your average Republican than “Stan With Rand” has.) At least, that’s the impression of almost every college Republican I talked to, with the exception of some like the handful that printed and handed out their own pro-Christe info-sheets in front of the exhibit hall.

Don’t get me wrong, there were certainly some aspects of CPAC that feel like they’ll never change. For example, on foreign policy, the only thing you will ever hear about Iran is how it is evil incarnate. Rep. Buck McKeon (R-CA), Chairman of the House Armed Services, summarized this nicely when he said in a panel that, “Everything [involving] terrorist Islam is Iran.” (Mr. McKeon later told me that he’d meant “most things” instead of “everything,” but not after trying to first explain that he had heard the “everything” line from a General’s testimony, and, then, back-tracking). Likewise, Breitbart’s Editor-in-Chief Joel Pollack said that, Iran is “bridging the Sunni-Shia divide” to benefit a radical Islamic agenda. Both of these statements show a bit of misunderstanding of the complicated politics of the Middle East: Iran does not support every bit (or even “most” bits) of Islamic terrorism, with obvious bits including both Jabhat al-Nusra and Jabhat al-Wahdet al-Tahrir al-Islamiyya in Syria, and al-Qaeda. And neither does Iran do anything that would “bridge” the divide between Sunni and Shia as this runs afoul of what the Iranian powers-that-be stand for.

In the end, it was good to visit CPAC again. The event was entertaining, and the people who recognized me or remembered, were cordial and excited to see me again.

Plus, I even was the target of an ambush by Breitbart and Townhall “journalists” who were astonished that I’d agree with the statement that “Islam is a religion of peace and love.” For whatever modest change might be afoot in the conservative movement, it’s nice to think there are some parts of CPAC that will probably never change.

Jonathan Krohn is a former conservative pundit who is now the International Affairs and Politics Fellow for the Kurdish news organization Rudaw. He has written for various American websites and publications on domestic politics and foreign affairs including The Atlantic Monthly, Mother Jones, and The New York Times' Local East Village blog. He has also produced reportage for the European public television channels Arte and RTS.