Breaking with tradition, Pope Francis delivered off-the-cuff remarks instead of reading from a written speech 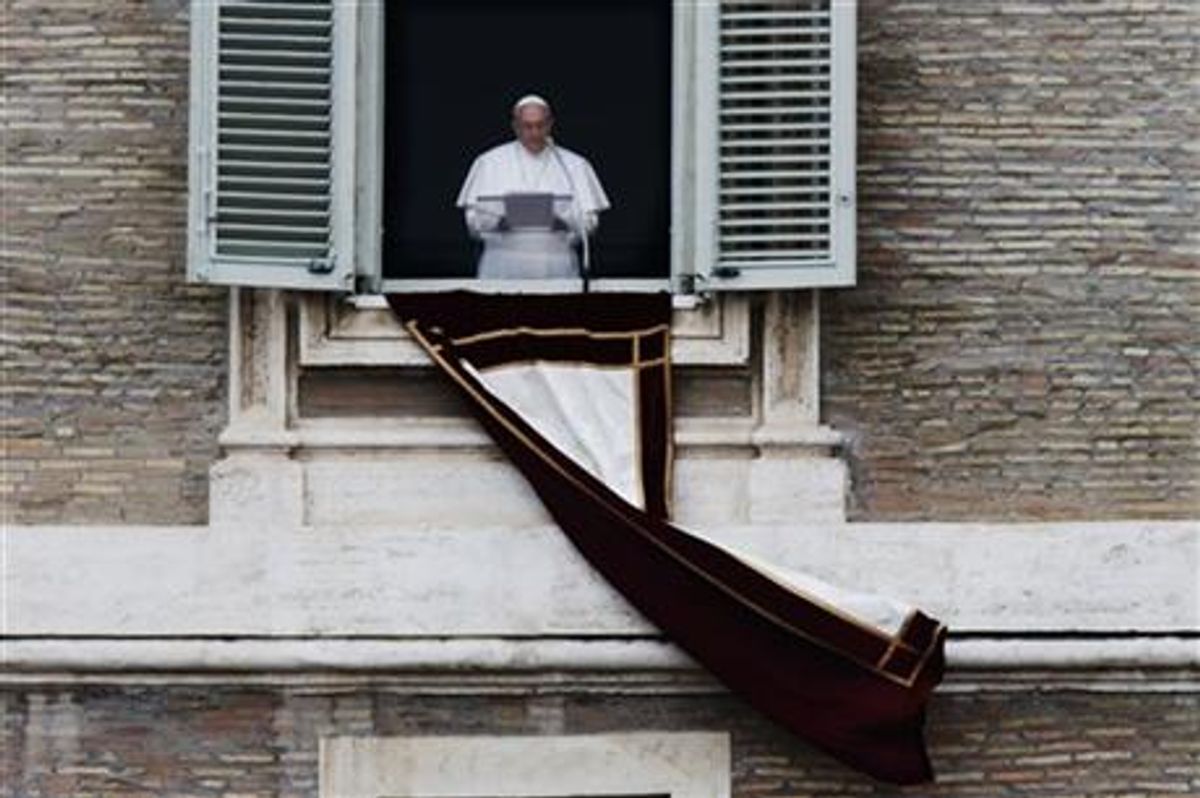 VATICAN CITY (AP) — Breaking with tradition, Pope Francis delivered off-the-cuff remarks about God's power to forgive instead of reading from a written speech for the first Sunday window appearance of his papacy.

He also spoke only in Italian — beginning with "buon giorno" (Good day) and ending with "buon pranzo" (Have a good lunch) — instead of greeting the faithful in several languages as his last few predecessors had done.

His comments and humor delighted a crowd of more than 150,000 in St. Peter's Square, drawing cheers and laughter.

Earlier Sunday, he made an impromptu appearance before the public from a side gate of the Vatican, startling passers-by and prompting cheers, before delivering a six minute homily — brief by church standards — at the Vatican's tiny parish church.

Before he entered St. Anna's church to celebrate Mass, he heartily shook hands with parishioners and kissed babies.

After Mass, Francis put his security detail to the test as he waded into the street just outside St. Anna's Gate. As the traffic light at the intersection turned green, Francis stepped up to the crowd, grasping outstretched hands. The atmosphere was so casual that several people even gripped Francis on the shoulder.

A few minutes later as the traffic light turned red, Francis ducked back inside the Vatican's boundaries to dash upstairs for the window appearance from the papal apartment in the Apostolic Palace.

The studio window was opened for the first time since Francis' predecessor, Benedict XVI, gave his last window blessing on Sunday, Feb. 24. Four days later, Benedict went into retirement, the first pontiff to do so in nearly 600 years.

Francis, the first pope from Latin America, was elected on March 13. He has been staying in a hotel on the Vatican's premises until the papal apartment in the palace is ready.

Hundreds of extra traffic police were deployed Sunday morning to control crowds and vehicles, for it was also the day of Rome's annual marathon.

Bus routes were rerouted and many streets were closed off in an attempt to channel the curious and faithful up the main boulevard from the Tiber river to St. Peter's square.

Giant video screens were set up so the huge crowd could get a close-up look at Francis, and dozens of medical teams were on hand for any emergencies.

After the Mass, the pope stepped out jauntily from St. Anna's Church and waved to a crowd of hundreds kept behind barriers across the street, and then greeted the Vatican parishioners one by one. One young man patted the pope on the back — an indication of the informality that has been evident from the first moment of his papacy.

"Francesco! Francesco!" children shouted his name in Italian from the street. As he patted one little boy on the head, he asked "Are you a good boy?" and the child nodded.

"Are you sure?" the pope quipped.

In his homily, Francis said the core message of God is "that of mercy." He said God has an unfathomable capacity to pardon and noted that people are often harder on each other than God is toward sinners.