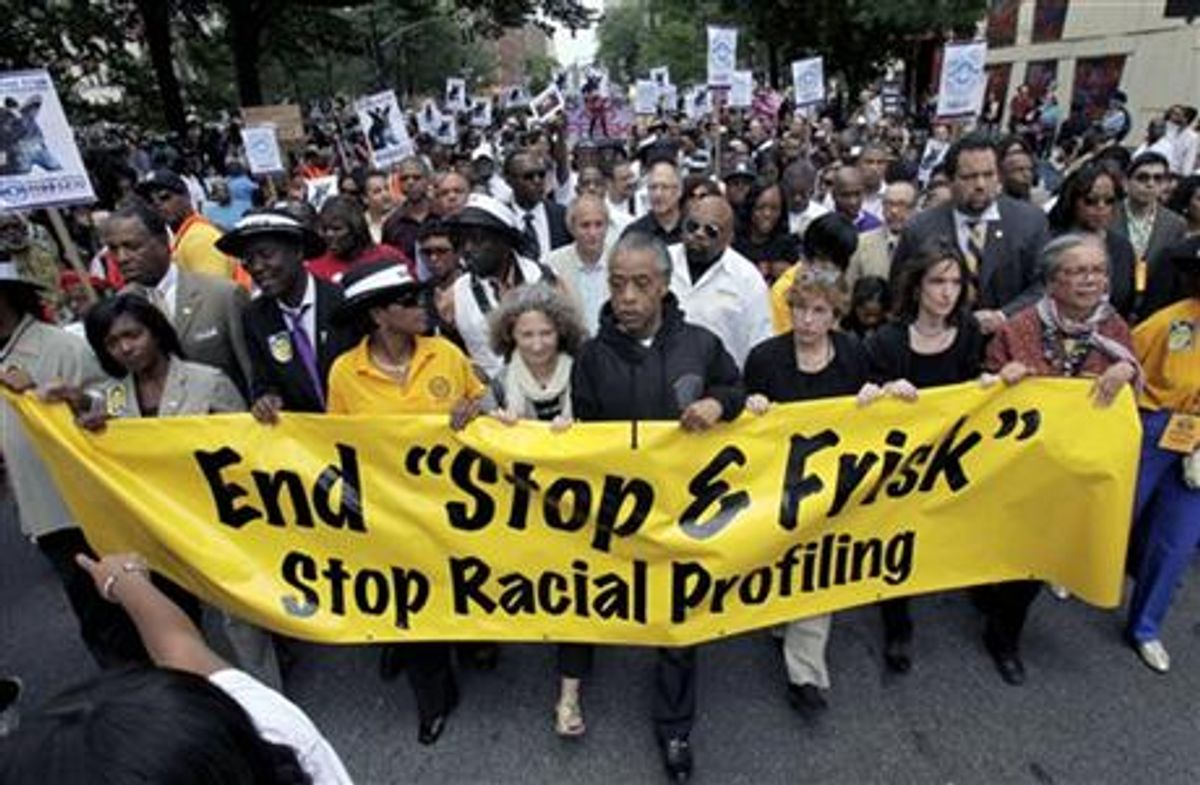 NEW YORK (AP) — The New York Police Department's practice of stopping, questioning and frisking people on the street is facing its biggest legal challenge this week with a federal civil rights trial on whether the tactic unfairly targets minorities.

Police have made about 5 million stops of New Yorkers in the past decade, mostly black and Hispanic men. The trial, set to begin Monday, will include testimony from a dozen people who say they were targeted because of their race and from police whistleblowers who say they were forced into making slipshod stops by bosses who were too focused on numbers.

"When we say stop, question and frisk, we're not talking about a brief inconvenience on the way to work or school," said Darius Charney of the Center for Constitutional Rights, the lead attorney on the case. "We're talking about a frightening, humiliating experience that has happened to many folks."

U.S. District Court Judge Shira Scheindlin, who has said in earlier rulings that she is deeply concerned about stop and frisk, is not being asked to ban the tactic, since it has been found to be legal. But she does have the power to order reforms, which could bring major changes to how the nation's largest police force and other departments use the tactic.

Street stops have become a New York flashpoint, with mass demonstrations, City Council hearings and, most recently, days of protests after police shot a teenager who authorities say pulled out a gun during a stop.

It's an issue outside of New York. Philadelphia settled a civil rights lawsuit last year over its stop-and-frisk program by agreeing to court monitoring, and San Francisco Mayor Ed Lee backed off plans to adopt stop and frisk after weeks of criticism last summer.

A 1968 Supreme Court decision established the benchmark of "reasonable suspicion" — a standard that is lower than the "probable cause" needed to justify an arrest.

Street stops increased substantially in New York in the mid-1990s, when, faced with overwhelming crime, then-Mayor Rudy Giuliani made stop and frisk an integral part of the city's law enforcement, relying on the "broken windows" theory that targeting low-level offenses helps prevent bigger ones.

Stops rose and overall crime dropped dramatically in a city that once had the highest murder rate in the U.S.

There were only 419 murders in 2012, the lowest since similar record-keeping began in the 1960s, down from more than 2,000 in the 1990s. And there were 531,159 people stopped, more than five times the number when Bloomberg took office a decade ago. Fifty-one percent of those stopped were black, 32 percent Hispanic and 11 percent white. According to census figures, there are 8.2 million people in the city: 26 percent are black, 28 percent are Hispanic and 44 percent are white.

About half the people are just questioned. Others have their bag or backpack searched. And sometimes police conduct a full pat-down. Only 10 percent of all stops result in arrest, and a weapon is recovered a fraction of the time.

Police documents indicate that officers are drawn to suspicious behavior: furtive movements, actions that indicate someone may be serving as a lookout, anything that suggests a drug deal or a person carrying burglary tools such as a slim jim or pry bar.

Celeste Koeleveld, a city Law Department attorney, said police go where the crime is, and minorities are overwhelmingly the victims of violent crime in the city. A 2003 court settlement and various city laws have instructed police to provide stop-and-frisk data and avoid racial profiling.

But minority residents say they're targeted regardless of location. Nicholas Pert, a 24-year-old black man, says he has been stopped many times in his gentrified Harlem neighborhood, while his white neighbors are not.

"We go to the gym and we have hoodies," he said. "One of my friends said, 'Maybe we should walk around with yoga mats instead.'"

Recent polls show a stark divide over how blacks and whites view the tactic, while among Hispanics, disapproval of the practice has grown. The debate has drawn in Muslim-Americans concerned about NYPD surveillance revealed in a series of reports by The Associated Press; the family of a 16-year-old shot by police who say he couldn't have had a gun; and City Councilman Jumaane Williams, who was detained at the September 2011 West Indian Day Parade. He recently tangled with Kelly on the issue during a public safety hearing.

The case was first filed in 2008 on behalf of David Floyd, a freelance film and video editor, and three others. It has since been named a class-action lawsuit on behalf of everyone who may have been wrongly stopped. Floyd said he was stopped and harassed at least twice by police, once simply walking home and again outside his apartment. In both cases, he said, they had no reason to stop him.

The trial is expected to last more than a month and include more than 100 witnesses. Lawyers will also plan to play hours of audio tapes made by Adrian Schoolcraft, an officer who was hauled off to a psych ward against his will after he said he refused to fill illegal quotas. His former bosses, including some reassigned after their statements were made public, are also expected.

In addition to seeking broad reforms, the lawsuit also requests a court-appointed monitor to oversee those changes.