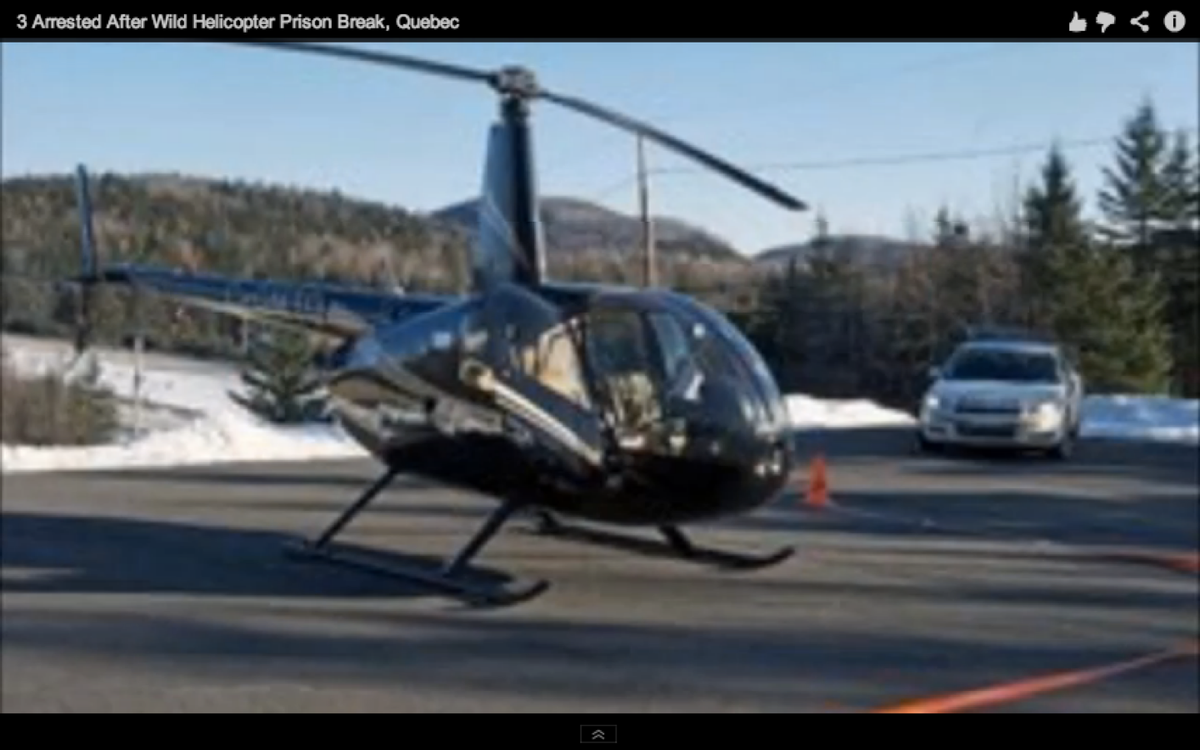 SAINT-JEROME, Quebec (AP) — Two Quebec inmates climbed into a hijacked helicopter to make a daring daylight escape from a prison outside Montreal, then led police in a car chase and exchanged gunfire at a rural cabin before they were finally recaptured, authorities said Monday.

Police said the helicopter pilot was held hostage in the Sunday jail-break and was not a suspect. He was treated for shock in hospital.

Quebec provincial police spokesman Benoit Richard said Monday that they had arrested four people about 50 kilometers (30 miles) north of the Saint-Jerome prison from which the inmates escaped. Police said they followed the helicopter until it landed, and then chased a car until it reached a rural cabin.

"When they got out of their vehicle they started shooting at police officers," Richard said.

Two of the suspects then broke into the cabin and the residents fled unharmed.

Two of those arrested Sunday were inmates Benjamin Hudon-Barbeau, 36, and Danny Provencal, 33. Hudon-Barbeau was arrested first and police cornered Provencal later in the evening, after establishing a security perimeter around a building where he had barricaded himself. Richard said Provencal had surrendered peacefully after negotiations continued through the night. Police found one of the other suspects on a highway.

Richard said the charges could include attempted murder, hijacking an aircraft, evasion, possession of restricted weapons and breaking and entering. The suspects are due in court on Monday afternoon. Richard said the accomplices are known to police.

On Sunday afternoon police received a call from the staff at the Saint-Jerome jail, reporting the escape at about 2:20 p.m. local time, Richard said.

The prison's warden told police that Hudon-Barbeau and Provencal had grabbed a rope dropped from the helicopter to make their getaway, Richard said.

Quebec provincial police tracked down the helicopter used in the escape to Mont-Tremblant, about 53 miles (85 kilometers) away from the jail but only the chopper's pilot was still at the scene. Police called the pilot "an important witness."

"It's spectacular. It's out of the ordinary," Quebec police spokesman Gregory Gomez Del Prado said. "Three were in custody within five hours. The fourth was in custody around midnight."

Police said Hudon-Barbeau had suffered an injury during the incident, unrelated to the shooting, and was under guard in a hospital.

Hudon-Barbeau was arrested in November on two firearm related charges and associating with people with criminal histories, according to a provincial police report. The arrest came as part of an investigation of a double murder in Quebec.

A Montreal radio station, 98.5 FM, said it received a call Sunday from a man claiming to be Hudon-Barbeau, who said he was "ready to die" as he tried to evade police.

"The way they're treating me in there, it's unreal," the man told the radio station. "They won't let me be. They put me back in prison for nothing."

Authorities did not immediately respond to the claims made in the radio station interview.

Yves Galarneau, the correctional services manager who oversees the Saint-Jerome jail, said he'd never seen anything like the dramatic escape in more than three decades on the job.

Galarneau said there are no security measures in place at the prison to prevent a helicopter from swooping down from above.

"This is the first time this has occurred in a Quebec facility," Garlarneau said. "An assessment will be carried out. We will be looking at what further steps can be taken."

Although the tactic is a first for Quebec, using a chopper to break out of jail has a long and colorful history, and not just in the movies.

A helicopter swooped down on a prison courtyard in Greece last month as armed men on board fired on guards and lowered a rope to help a convicted killer make his fourth attempt to escape from the prison. But the plot was foiled after the prisoner was shot and the chopper was forced to land in the prison's parking lot.

In 2009, one of Greece's most wanted men, bank robber Vassilis Paleokostas, escaped from from a prison with another inmate by helicopter — staging their second chopper getaway in three years. Paleokostas remains at large while an accomplice was arrested several months after the breakout.

A convicted murderer escaped from a Russian penal colony aboard a hijacked helicopter last year, but he was captured a few hours later.

Three inmates escaped from a Belgium prison by helicopter in 2009, but were later arrested. An inmate also escaped by helicopter from another Belgian prison in 2007. He was arrested two days later.

A New York businessman, Joel David Kaplan, used a chopper to escape from a Mexican jail in 1971, and went on to write a book about it. Pascal Payet, a French prisoner, used a helicopter to escape on three occasions, only to be caught by authorities every time.

The prison at the center of Sunday's escapade in Quebec is a provincial detention center with a maximum-security wing.

Saint-Jerome jail, located about 37 miles (60 kilometers) northwest of Montreal, experienced a mini-riot by about a dozen prisoners a little over a month ago. In that incident, police were called in to secure the outside of the jail, which holds about 480 inmates, and jail staff used pepper spray to disperse the mob.

A man answering the phone at Heli-Tremblant in Mont-Tremblant, Quebec, confirmed one of the company's helicopters was involved in the hijacking, but refused to comment. He said there was "no way" the pilot would comment.