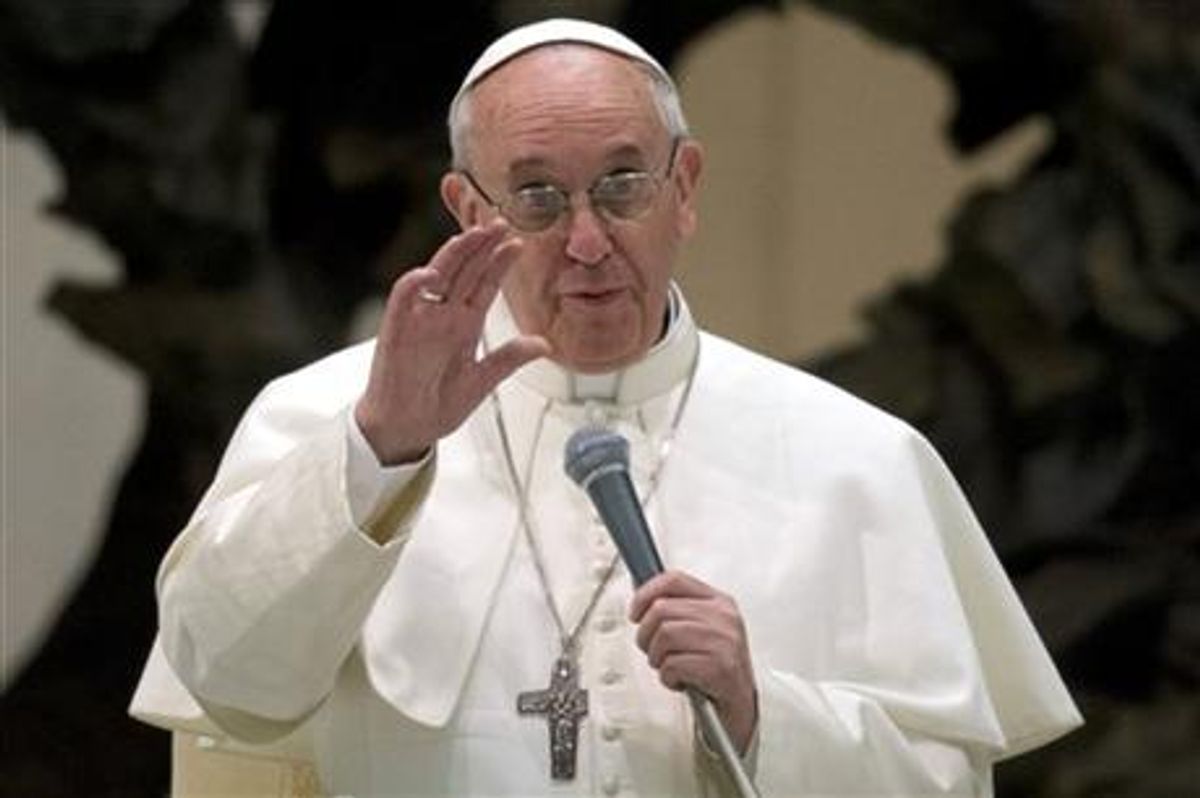 VATICAN CITY (AP) — Pope Francis' diplomatic skills are being put to the test Monday, as the first head of state he meets is his own: Argentine President Cristina Fernandez, with whom he has clashed over her socially liberal policies and what he has called the government's strident displays of power.

Fernandez was calling on the former Archbishop of Buenos Aires Monday at his makeshift home, the Vatican hotel on the edge of the Vatican gardens, a day before she and other world leaders attend his installation Mass in St. Peter's Square.

The venue is unusual, given the pope has technically taken possession of the papal apartment in the Apostolic Palace, where such formal audiences are usually held. For a pope who has already come to be known for his gestures, the choice is perhaps significant, though he has conducted all of his audiences in the hotel, including with the Vatican secretary of state.

Fernandez and her predecessor and late husband, Nestor Kirchner, defied church teaching to push through a series of measures with popular backing in Argentina, including mandatory sex education in schools, free distribution of contraceptives in public hospitals, and the right for transsexuals to change their official identities on demand. Argentina in 2010 became the first Latin American country to legalize same-sex marriages.

According to Francis' authorized biographer, Sergio Rubin, the former Cardinal Jorge Mario Bergoglio was politically wise enough to know the church couldn't win a straight-on fight against gay marriage, so he urged his bishops to lobby for gay civil unions instead. It wasn't until his proposal was shot down by the bishops' conference that he declared what gay activists called a "war of God" on the measure — and the church lost the issue altogether.

Fernandez issued a perfunctory message of congratulations when Francis was elected last week, calling the election of the first Latin American pope "historic" and saying she hoped that given his namesake, St. Francis of Assisi, the new pope would inspire world leaders to pay greater attention to the poor and pursue dialogue rather than force to resolve disputes.

She has, however, remained unusually silent about the election on her otherwise prolifically active Twitter account, posting a single tweet on his election day: "To your Holiness Francis I" with a link to her letter of congratulations, which wasn't even signed.

Their chilly relations became crystal clear after the Kirchners several years ago stopped attending the church's annual "Te Deum" address challenging society to do better, which is delivered each May 25.

In last year's address, Bergoglio said Argentina was being harmed by demagoguery, totalitarianism, corruption and efforts to secure unlimited power: a strong message in a country whose president has ruled by decree and left scandals unpunished.

The Fernandez meeting isn't the only diplomatic dance Francis will be conducting this week as more than 120 official delegations descend on Rome for the Mass formally installing Francis as the 266th leader of the 1.2-billion strong Catholic Church.

One significant VIP is the spiritual leader of the world's Orthodox Christians, Ecumenical Patriarch Bartholomew I. His presence at the installation is the first from the Istanbul-based Patriarchate in nearly 1,000 years since the Great Schism divided the church in 1054.

Also arriving in Rome on Monday was Taiwanese President President Ma Ying-jeou, a rare European foray for the head of the diplomatically isolated island that underscores the tricky nature of its relations with China and the Vatican.

"We want to have much better relations with the Vatican and I think we will, thank you," Ma said as he arrived. He said Francis was a "wonderful person. I think he'll do a very good job."

Taiwan has full diplomatic relations with only 23 countries, most of them in Latin America, Africa, and the south Pacific. Its only diplomatic ally in Europe is the Vatican, though even that tie remains tenuous.

The Vatican has long expressed a willingness to transfer its diplomatic recognition from Taipei to Beijing, though it has made that conditional on China allowing its Catholics to worship freely, without Communist Party restrictions.

China has congratulated the new pope on his election, but said that establishing formal relations would depend on the Vatican cutting ties with Taipei and ceasing activities Beijing considers interference in its internal affairs.

State radio in Zimbabwe said Monday that President Robert Mugabe had also arrived in Rome for the inaugural Mass.

Mugabe, 89, is the subject of a travel ban by European nations to protest his human rights record in a decade of political and economic turmoil in his southern African nation, but it does not affect his trips to the Vatican through Italy.