Priebus is right about his party's terminal illness, but he'll have to fight Palin and Limbaugh to save it 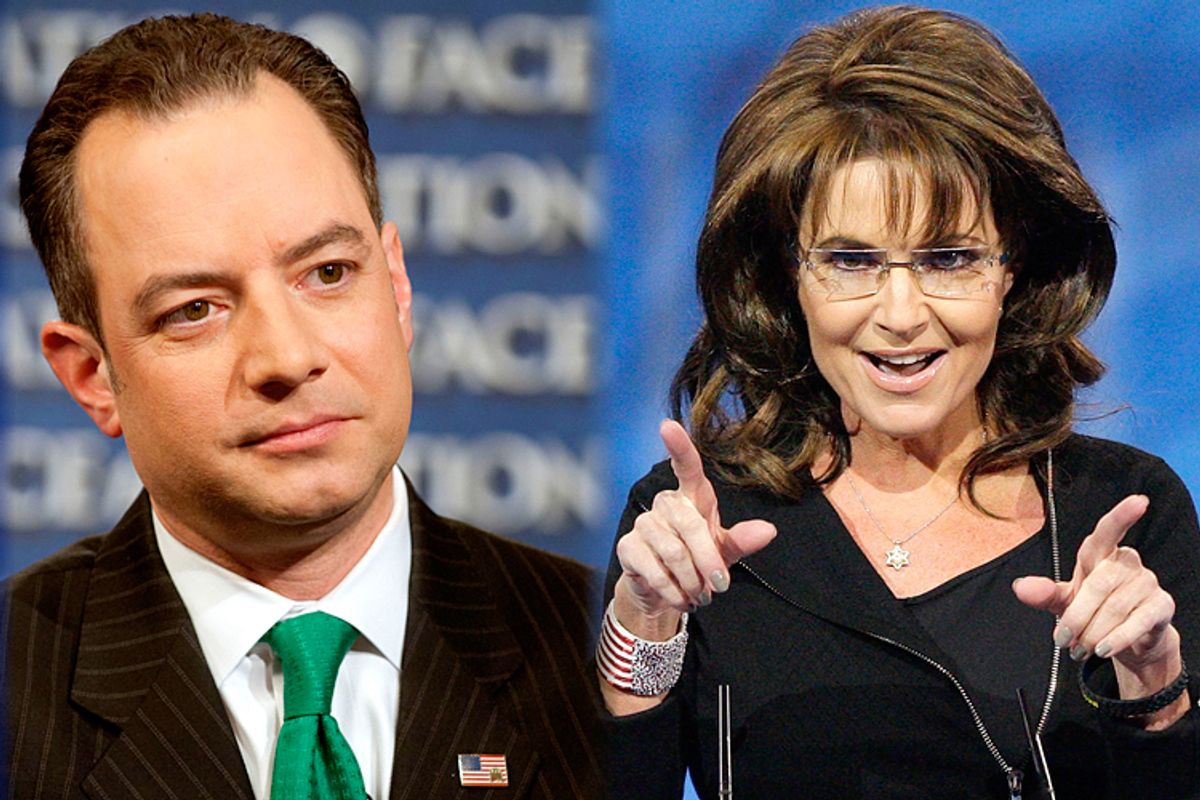 It’s a little weird to call an inquiry into the troubles of a living entity an “autopsy” – they’re normally performed on the dead -- but that’s what Republican National Committee Chairman Reince Priebus labeled his four-month examination of his party’s 2012 defeat. It turns out he believes in truth in labeling.

Priebus’s thorough-going investigation and its 200 pages of recommendations leave the modern GOP dismembered, its diseased vital organs cut out, their toxicity examined, and the patient lying dead on the table. Some of the recommendations are surprisingly substantive, urging the party to rethink its harsh stands on gay rights and to back comprehensive immigration reform, for instance. It admits many voters see the party as “scary” and “out of touch.” But with the far-right crackpot CPAC convening as its backdrop – Exhibit A in scary and out of touch -- it’s hard to see any organized GOP constituency for such changes, while there’s plenty of party opposition.

“Let’s be clear about one thing, we’re not here to rebrand a party,” Sarah Palin declared Saturday. “We’re here to rebuild a country.” Rush Limbaugh has already declared war on Priebus and his makeover plans. “The Republicans are just getting totally bamboozled right now,” Limbaugh told his listeners. “The Republican Party lost because it’s not conservative, it didn’t get its base out. People say they need to moderate their tone — they don’t.” He dismissed Priebus’ project as designed to soothe the party’s “donor base.”

Sure, some of the language is just namby-pamby massaging of the message. The section on women sounds like an old Midol commercial, promising to “address concerns that are on women’s minds in order to let them know we are fighting for them.” (Actual policies not included.) Of course, in the real world Republicans are still trying to defund Planned Parenthood and introducing new anti-choice bills coast to coast. And just over the weekend, Senate Minority Leader Mitch McConnell showed his desire to reach out for the women’s vote by ridiculing Hillary Clinton as the right age for the cast of “Golden Girls” but not the White House.

There’s also lots of support for “speaking out,” as in “We should speak out when a company liquidates itself and its executives receive bonuses but rank-and-file workers are left unemployed,” the report says. And also: “We should speak out when CEOs receive tens of millions of dollars in retirement packages but middle-class workers have not had a meaningful raise in years.” Speak out, and say what? Tougher still – do what? It’s clear Priebus is concerned that the party is perceived as the protector of the top 1 percent – but that’s because it is.

The report recommends a $10 million outreach effort to Latinos, African-Americans and Asians, concluding, “If we want ethnic minority voters to support Republicans, we have to engage them, and show our sincerity.” Still, there’s not much acknowledgment that GOP policies are actively repelling voters who aren’t white – and just pushing those policies with more friendliness and sincerity isn't likely to win those voters to the GOP. It pledges to do more outreach to low-income voters, and help them become middle-class, but since Paul Ryan’s latest budget gets two-thirds of its cuts from programs for the poor and working class, that’s going to be a hard sell.

The one exception to that preference for outreach above policy overhaul is in the area of immigration, where the report endorses comprehensive reform. Even at CPAC it was clear there’s a split in the party, with Florida Sen. Marco Rubio, a 2016 hopeful, pushing reform that includes some kind of path to citizenship, an idea Ann Coulter blasted as self-destructive. "If amnesty goes through, America becomes California and no Republican will ever win another national election," Coulter said. It’s amazing how conservatives’ anti-Latino racism finds new justifications: Now the problem isn’t that they’re taking “our” jobs, or bring violence with them across the border à la Jan Brewer – it’s that they vote Democratic. But Coulter has lots of company in concluding that GOP-backed immigration reform doesn’t help Republicans, by taking a wedge issue off the table, it helps Democrats by handing them new voters.

The other bold declaration in the report has to do with gay rights. It’s framed in terms of the party’s worry that young people are increasingly voting Democratic, but it’s still a step forward. “[W]e do need to make sure young people do not see the Party as totally intolerant of alternative points of view. Already, there is a generational difference within the conservative movement about issues involving the treatment and the rights of gays — and for many younger voters, these issues are a gateway into whether the Party is a place they want to be.”

And while there’s some movement within the party on gay rights, House Speaker John Boehner still felt it necessary to reassure Republican voters that unlike Ohio Sen. Rob Portman, he wouldn’t support gay marriage --  not even if his son was gay! House Republicans paid to support the Defense of Marriage Act even as the Obama administration refused to back it before the Supreme Court. Gay rights may be the policy issue where change comes fastest for the party – but it probably won’t be in time for 2016. That year’s presidential primaries will almost certainly feature a roster of Democrats who support gay marriage – Hillary Clinton made it formal with a video Monday -- making it a divisive issue only on the GOP side.

Priebus deserves some credit for tackling a couple of tough issues as well as facing up to the party’s collision course with extinction if it doesn’t broaden its demographic base beyond older white people. But if he goes too far for the right, he doesn’t go far enough to make a real pitch for moderate voters and voters who aren’t white.  His autopsy won’t make sense until Republicans realize their party is dead as a national entity at least in its current paranoid, polarizing incarnation.