"Spring Breakers" director Harmony Korine: "There's no such thing as a sell-out"

The "Spring Breakers" director says of all the gun violence: "I wasn't trying to make a film that's realistic" 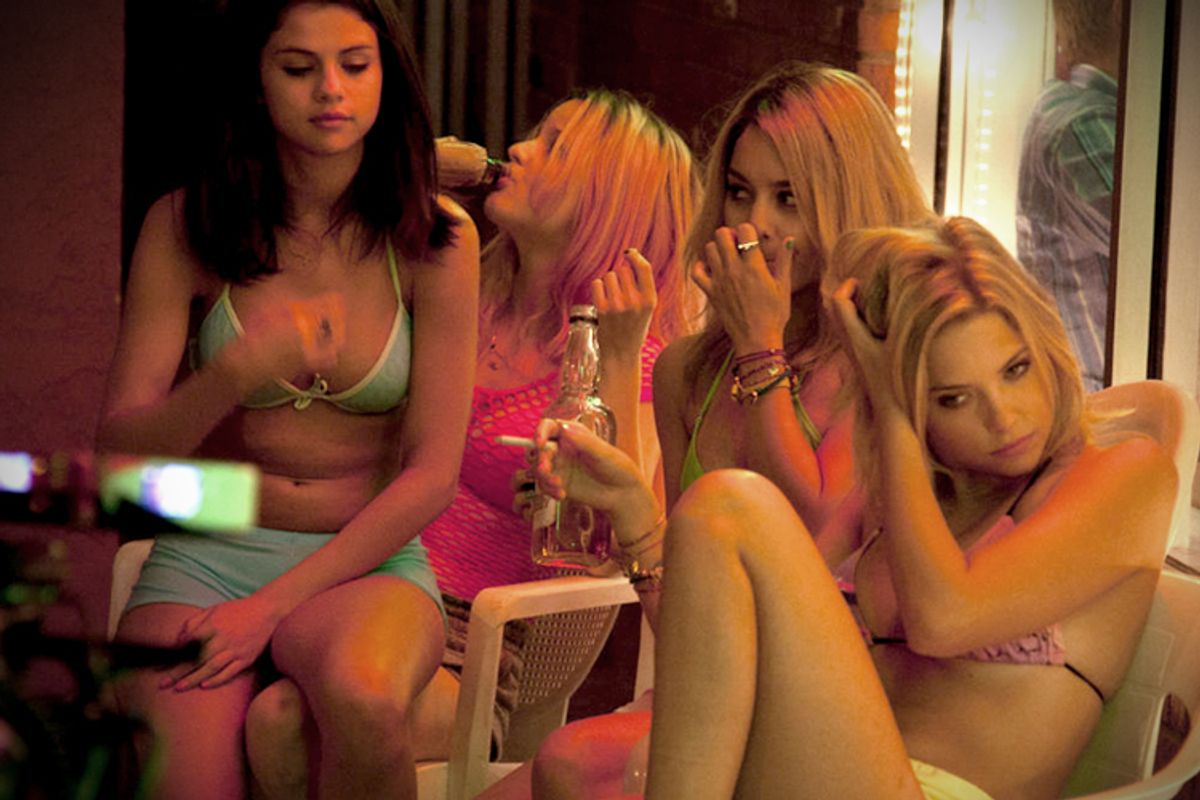 Harmony Korine's movie "Spring Breakers," which tells the story of four girls seeking risqué fun on a week in Florida, had a huge weekend, as it averaged $90,000 per screen in three theaters. As the ultra-violent movie -- starring Disney Channel tween queens Selena Gomez and Vanessa Hudgens along with a Britney-singing James Franco -- gears up to expand nationally on Friday, director Korine battled a sore throat to talk to Salon about whether his movie glorifies or deplores gun violence and whether he's a sellout now.

After beginning your career with little-seen indies like "Kids" and "Julien Donkey-Boy," do you feel like a "sellout" for making a widely seen movie about spring break?

Here's the thing that people don't understand: I don't really care. I've never been a careerist. It's not a strategy. I react to certain characters and story lines and specific mode of filmmaking. I feel a kind of emotional pull in a specific direction and that's what I follow. As far as the sellout thing goes: It makes me laugh. That term means nothing anymore. This whole idea of "sellout culture" or what's high or low culture is an old person's thought process. It's counter to the truth of the moment. It does not exist anymore. It's been obliterated.

There's no such thing as underground, no such thing as sellout. There's nothing high. There's nothing base. It all exists in the air. Things are either interesting or not interesting. Good or not good. Things have a connection and a grace and an energy or they don't. That's all I care about. The way that people watch things on the Internet and modes of viewing and creating: How could anyone say there's such a thing as an underground anymore?

The most interesting rap music is that way. Chief Keef or Drake -- they're seemingly really pop on the surface, really catchy. But it has this super-druggy, trippy kind of sinister pathology as well. I see two things working at once.

Do you think your stars' careers will be damaged going forward if they desire to return to kiddie fare on Disney or ABC Family?

The truth is, I don't know. But I know from working with them that there was never any conversation about that kind of thing. That was never discussed. Maybe someone was thinking that behind closed doors. I never got a sense that was a real issue. The thing that attracted them were the characters and the story line and their excitement at challenging themselves and doing this style of acting. To my surprise and my chagrin, they responded to my world.

How did it cause you chagrin?

Do you feel any sense of responsibility when you make a film that's so full of gun violence?

And I don't want it to be necessarily talked away. It's something that's more transcendent and almost like a drug experience. As far as the violence goes, the violence in the movie is kind of gangster mysticism. It's this idea of the culture -- these characters specifically distilling their values or their philosophy into these base ideas of money, sex, drugs and violence. This was a distillation of all of these things.

It almost sounds like you meant the violence in "Spring Breakers" to make a moral point about the baseness of American culture.

So, here's the thing with that. I know and I feel strongly about what's in the film. The film is on the side of righteousness. All those things are in there. But for me to make the film in the way it's made, and also have to say that it's a condemnation, is a disservice to the film. It's a completion of the act. And it's more important to me to let people dream on it. If I said, "This is what it is, and I feel strongly about what it is," that negates people's interpretation of the film. It can suffocate it.

Not to belabor this, but do you have any opinions about gun violence?

But it's the entire history of movies. And so I don't even know where you'd begin with that. It's so entrenched culturally. It's so woven into the American psyche. I'm also a product of that! I don't even know: It's very difficult to even examine it and separate yourself.

Did Britney Spears' people get mad when you used "Everytime," her ballad, to score a hyper-violent montage? And do you really like the song?

Everything was just great! I think everyone understood: It was kind of an amazing moment.

And I like her music! I think it's like perfect pop music. That song "Everytime" -- I was always taken by that song. It has this real kind of beauty and airlessness and this haunting kind of morose lullaby effect and underneath it there's some type of hardcore aggression and menace that was really connected to the film in the way that the film deals with the culture of surfaces, this candy-coated neon haze reality. Underneath it, there's this subtext and feeling of this kind of darkness. It was a connection I felt.

Did you ever go on a spring break trip yourself?

As a kid, when everyone went, I didn't go. I was more into skateboarding at the time. It was such a common thing. Everyone would drive to Daytona Beach and I was trying to get away from it at that point. I never even knew that it was that interesting until a year ago.