At this point, America's notorious prison gang is more devoted to the drug trade than it is to its racist ideology 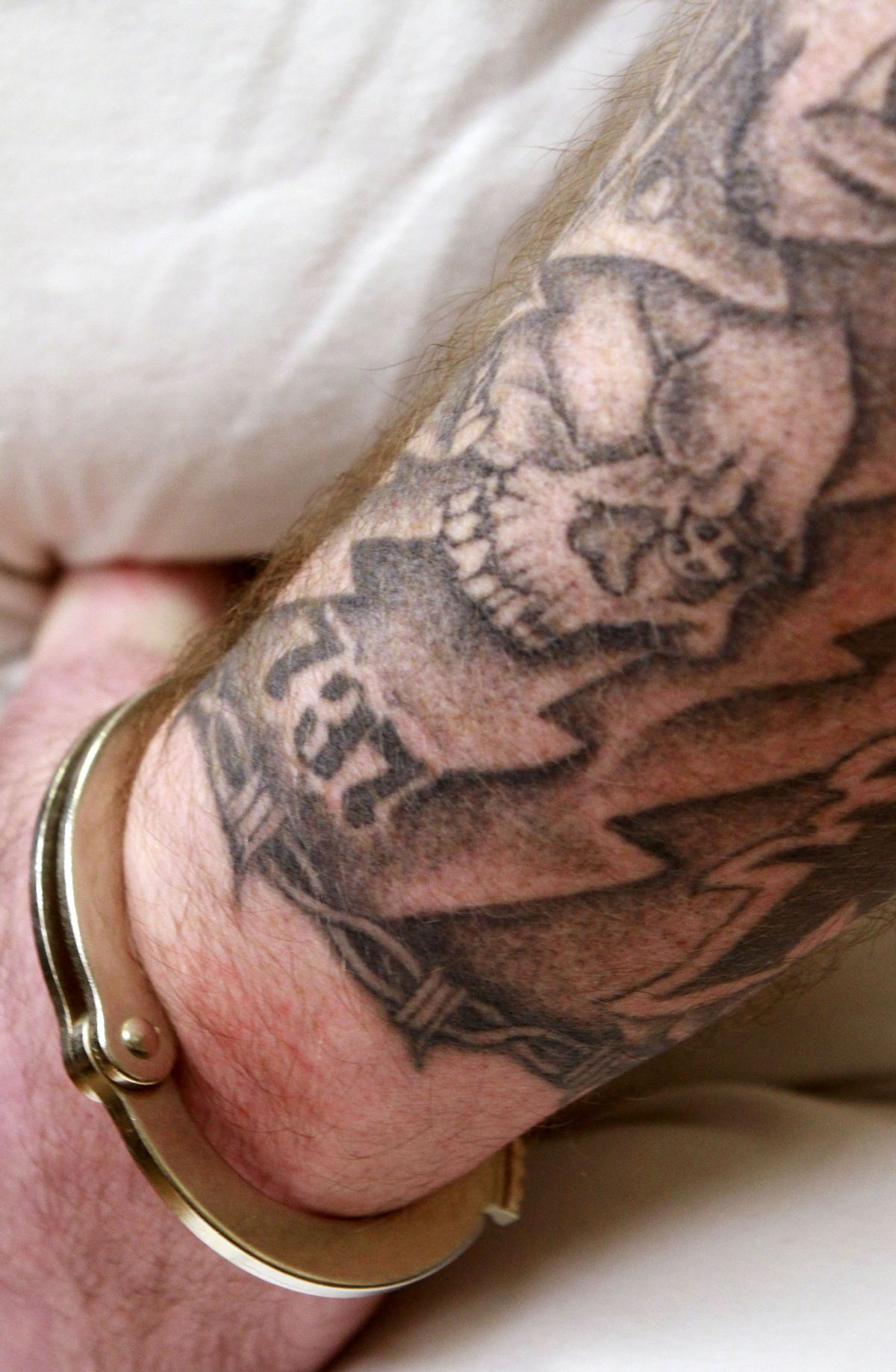 Prison is a place where racial hatred is routine, where gangs rule the roost and heroin is the most valuable commodity. “A white person in prison is in deep trouble if he doesn’t have people to stand with him,” one prisoner tells The Fix. “The guards can’t do nothing. All they can do is prosecute the winner.” And there are few bigger winners in the feds than the Aryan Brotherhood.

Despite some high-profile crackdowns against the gang in recent years, its grip on many facilities remains strong. “I just came from USP Lompoc [in Southern California] and the AB is running that yard,” the prisoner says. “The drugs are flowing. They got Atwater, Victorville, Canaan, Hazleton, Florence, Marion, Big Sandy and Coleman on lock. They are all over the system. The feds can’t stop anything.”

The AB is one of the nation’s “big four” prison-born gangs, along with the Mexican Mafia, the Black Guerilla Family and the Nuestra Familia. The “Brand,” as it's also known, is estimated to have over 15,000 members and associates nationwide, half behind bars and half on the street. The gang was born in the violent California prison system of the ‘60s, reflecting the racial tensions of the times. “The mentality back then was ‘kill whitey,’” says an old-timer who did time back then. “In the beginning, the AB had one true purpose: to stop blacks and Mexicans from abusing whites. If you weren’t picked up by the AB, you were dead.”

But if you wanted to join, all you had to do—belying claims of a merely defensive purpose—was to kill, or attempt to kill, a black or Mexican inmate. The Brand’s motto was “Blood in, blood out”—meaning once you spilled blood in order to join, the only way you were leaving was in a body bag. The AB’s leaders read Machiavelli, Nietzsche, Sun Tzu, Tolkien and the old standby, Mein Kampf. They touted their white supremacist ideals with tattoos, such as Nazi swastikas and lightning bolts (for the SS), and Celtic and Viking symbols to represent Anglo-Saxon and Nordic roots. The shamrock cloverleaf was a key ink ID.

But the AB long ago subordinated its racist ideology to the acquisition of money. “The leadership became much more interested in power than race and started muscling in on the gambling, extortion and dope rackets,” the old-timer says. As part of its bid to exert control over these prison “industries,” the AB adopted a structure in the ‘80s similar to the Italian Mafia—with a three-man ruling commission and a formal hierarchy, with orders sent down the chain of command. The gang started operating as a full-fledged criminal enterprise. The Brand eventually ran much of the drug trafficking, gambling and prostitution behind the walls, and plenty more on the outside. They use murder or the threat of it to enforce their authority.

The Brand’s prison trafficking operations are legend. Mules smuggle in heroin, marijuana, cocaine and methamphetamine wrapped in balloons, condemns or cellophane, either by swallowing up to a dozen a time or by “keistering” them. Black tar heroin is especially profitable and easy to cop from AB’s outside sources. Serving life sentences, often in 24-hour lockdown at Pelican Bay or ADX Florence, AB kingpins still control the flow of drugs into prisons nationwide, by sending out “kites”—coded operational instructions passed through the mail or via bribed prison staff, visits, lawyers or other inmates.

The leaders also order stabbings and murders. Prisoners have been killed for transgressions as minor as making disparaging remarks about the Brand, as court documents show. According to the FBI, gang members constitute under 1% of the total federal prison population but commit up to 20% of the murders inside the system. “They have become a bloody organization that enforce their will through murder and chaos in prisons across the country,” a correctional officer says. “They will stab another inmate in full view of correctional staff. These guys do not play.”

Prison authorities often look the other way when it comes to the lesser evil of trafficking. The Brand’s leaders wield so much control that they effectively serve as powerbrokers to maintain order. “Prison is where these guys live. We only punch the clock,” the correctional officer tells The Fix. “If you are going to spend the rest of your life in prison, why not be an AB member? They live like kings.” That power is maintained largely by drugs. “Selling heroin to fellow convicts generates a lot of money for the Brand,” says the officer. “Several hundred thousand a year from a single prison. And how many yards do they control? You do the math.”

But the violence involved in running the drug trade is increasingly threatening the gang’s dominance, if not survival. A series of federal investigations into the Brand have had the effect of widely publicizing the brotherhood's activities. Some court records from 2007, for example, state that the Aryan Brotherhood sought “to launch a cooperative effort of death and fear against staff and other inmates in order to take over the system.” But even as AB leaders are dragged into court and convicted, the life sentences they often receive are mere slaps on the wrist for men who already know they will die behind bars.

One of the first and most notorious targets of the feds was Michael “Big Mac” McElhiney, who sits, to this day, on the Brand’s governing body. Having been in and out of the California State prison system for years, Big Mac was a long-time Brand member whose body was covered in tattoos—including a shamrock in the middle of his chest. In 1989 he became a federal prisoner serving 21 years and 10 months for possessing methamphetamine with intent to distribute, conspiracy to murder a witness and illegal possession of a firearm. In fall 1994 Big Mac arrived at USP Leavenworth, known as "the hothouse" for its small, sweltering cells, where the Brand’s presence was already strong. Big Mac, already a prison celebrity due to his AB status, was immediately surrounded by a fearsome group on the yard and handed the keys to the white boy car.

“For the whites, anything that we did, we had to answer to Big Mac," the younger prisoner, who was there at the time, tells The Fix. "He likes to have everybody know he’s God.” Big Mac soon complained about the "lack" of drugs on the yard. So he started to canvass the population for vulnerable prisoners: drug addicts and men who were in debt, or simply scared. “He could sway the weaker inmates to have their people bring in drugs,” the correctional officer says. “The visiting room is the main route for drug smuggling into the prison.”

In the visiting room at Leavenworth, prisoners and their girlfriends or wives—and other women, desperate for money—can kiss once when they greet each other and once when they part. A balloon containing two grams of heroin is smaller than a marble and can easily be passed mouth-to-mouth. The prisoner swallows the balloon and later regurgitates it or lets it pass through his body. Those kisses form part of a major entry port, with an estimated 95% of Leavenworth’s drugs entering through visits.

“Big Mac had it set up so that five prisoners would be out on the dance floor copping on the same day,” the prisoner says. “He knew that even if one got caught the other four would make it through. He got a piece of everything.” Heroin flooded in; in 1995, the year after Bic Mac’s arrival, Leavenworth registered 1,200 positive urine tests. Even prisoners in solitary confinement could get it. “Over three-fourths of the yard used heroin,” the prisoner estimates. “Heroin deadens everything. You’re feeling no pain and Leavenworth was not a nice place.”

Big Mac’s crew would cut the heroin into quarter-gram pieces, then distribute them to prisoners who sold them on. Each gram, which cost $75 on the street, brought back as much as $1,200. Big Mac transferred much of the cash to California by money order and Western Union. There, dealers would arrange to transport the heroin, packaged in balloons, to prison visitors, starting the cycle over again. Thousands of dollars of heroin a month were moved through an elaborate system of payoffs and profits—all funding the Aryan Brotherhood’s activities and leadership.

In fall 1995, Michael “Big Mac” McElhiney was charged with conspiring to smuggle heroin into Leavenworth. At the trial in 1998, he acted as his own attorney, wearing a dark suit, white shirt and tie; his tattoos were visible only as he was cuffed and shackled to leave the courtroom. When Big Mac delivered his summation, he told the jury that because the prosecution had no solid evidence, it was prosecuting him on the basis of his alleged membership of the Ayran Brotherhood. His motivation to smuggle heroin into prison, he said, was entirely magnanimous. “The biggest conspiracy the evidence shows is I’m trying to help my brother get a shot of dope. I don’t use heroin. He’s my friend, he does. I will help him.” He was convicted of conspiracy to possess heroin with intent to distribute. Thirty years were added to his original sentence. But although Big Mac seemed all about his defense (which was even commended by the judge for its high quality), he had an ulterior motive.

“He used the trial to bring members of the Brand together by calling them as defense witnesses,” the prisoner says. “The government and Warden goofed and allowed everyone that Mac had subpoenaed to be housed together in an isolated segregation unit known as building 63.” In this way, the AB effectively held a summit to share information and plan future endeavors. Under 24-hour lockdown, they still communicated easily, by "using strips of torn sheets to pass kites from cell to cell," the prisoner says. "Also by draining water out of their toilet bowls, they could use the sewer system pipes as a makeshift telephone line. They talked directly into the empty toilets."

The feds were not through with the Brand. In fall 2002, following a three-year investigation, 29 leaders, including Big Mac, were charged with 32 murders or attempted murders, drug conspiracy and racketeering. The RICO laws, designed to prosecute Mafia families, were now being used against AB’s systematic business of murder, gambling, extortion and narcotics trafficking. The massive indictment asserted, among many other crimes, that the AB was importing heroin from as far away as Thailand through a partnership with Asian gangs. The prosecution wanted the death penalty—indeed it was the largest death penalty case in US history—arguing that since many of the defendants already had life sentences, nothing else would deter them from continuing their bloody operations. Instead, everyone was convicted and sentenced to life.

The convictions and headlines count for little, though. The Brand is still running the heroin trade in the feds and California state system today. They often use young guys in smaller gangs, like the Nazi Low Riders and the Dirty White Boys, as proxies to do their dirty work. “Most of the AB dudes are dinosaurs now. They need fresh blood,” the prisoner says. “These other gangs act as the minor leagues for the brotherhood. Only the most vicious, lethal and go-hard white boys are selected for full membership. And when they get that shamrock, it’s show time.”

Still, the crackdown continues. In November 2012, 34 members of the Aryan Brotherhood of Texas were charged with a barrage of crimes, including murders, racketeering and conspiracy to distribute methamphetamine and cocaine. Four “generals” face the death penalty.