Is "Olympus Has Fallen" anti-Obama?

An acting president, who is black, fails to prevent an attack from extremists tied to North Korea. Interesting 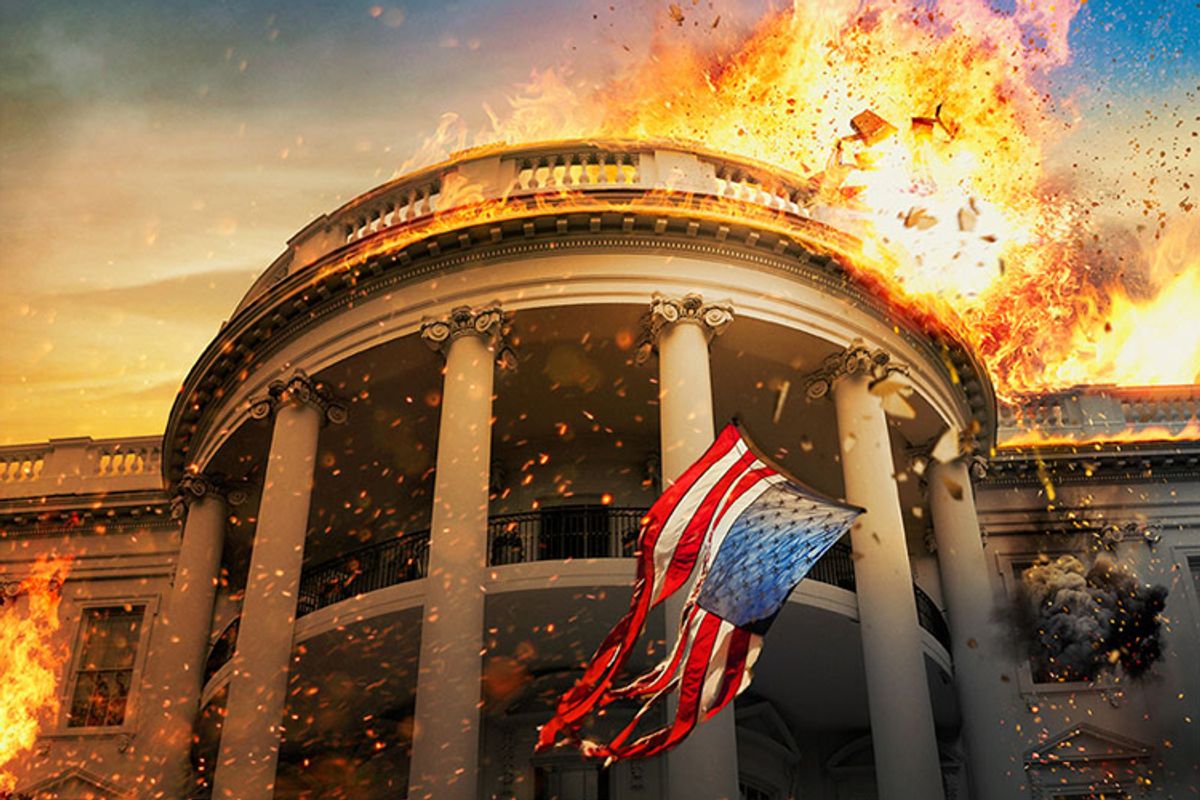 Image from "Olympus Has Fallen" (Filmdistrict)
--

In the new film "Olympus Has Fallen," a black man is acting president, Ashley Judd is (for a time) the first lady and paramilitary forces with North Korean ties overwhelm the White House defenses. The president, vice president and secretary of defense barricade themselves in a bunker deep underneath 1600 Pennsylvania Avenue -- good thing, because the White House is a burning shambles.

Get used to seeing the president's home under attack. This summer brings "White House Down," a film starring Jamie Foxx as the president in a seat of power under siege. Later this month, the "G.I. Joe" sequel is to feature black flags flown over the White House as a mysterious supervillain impersonates the president and takes over the country. The "Iron Man 3" trailer reaches its climax at a shot of Air Force One getting shot out of the sky.

So what is it we thrill to about watching our national landmarks destroyed on the big screen? And at a time when real North Korea nuclear threats are in the news, what's so entertaining about watching them score a direct hit on Washington?

"It’s kind of fun," says "Olympus Has Fallen" director Antoine Fuqua, "especially when you know that you can walk out of there OK and go home."

For Fuqua, disaster films exist as a sort of catharsis. He's unapologetically patriotic and means the film as a sort of statement of American might. But go back to the disaster thrillers of other decades and you'd never see such explicit destruction. The 1964 film "Seven Days In May," for example, remains a chilling tale of a coup. "At the time it was seen as quite shocking," says Mark Feeney, the Pulitzer Prize-winning Boston Globe critic and author of "Nixon at the Movies." But it wasn't taking place in the White House. It didn't show the White House being blown up."

For Feeney, that we now see such images at the movies is a sign of the way we now consider politics.

"Prior to Watergate, the White House was held in such high regard that the idea of the president getting used as a plot device and getting treated in such a fashion was unthinkable," he said. "In a very general sense, ["Olympus Has Fallen"] reflects the less exalted view we now have of the presidency."

With Morgan Freeman playing an African-American president, however, it's also easy to wonder whether the filmmakers are playing to an audience that holds a less than exalted view of Barack Obama.

"There's a cynical aspect to this," said A.S. Hamrah, a film critic for the journal n+1. "Producers make films because they think they understand what's going on in the national mood. They prey upon the fears of a certain audience."

Hamrah suggested that it was no accident that a series of 2013 films depicted the presidency under siege: "They just seem like movies made to capitalize on the fears and uncertainties of an audience that doesn't accept Obama as a legitimate president."

After all, the most famous White House destruction on film took place in 1996's "Independence Day," but that film's buff, Clintonesque president was never threatened in any meaningful way. The White House was only blown up because it was a recognizable building. In "Olympus Has Fallen," it's the man inside the White House -- and his failure to prepare for or fight off a threat from the East -- that's in question.

Fuqua, however, denies that's his message.

"In this movie, we're waving the flag -- even when we're getting our asses handed to us," he says. "Ultimately, the statement is that there’s hope and we’ll always rise. And you can tear down buildings but you can’t break our spirit and who we are. I think it’s important to say those things, and not be afraid to say those things, not afraid to be proud of our country."

The explicit imagery of the White House burning or burning American-flag motifs are no accident: "We’ve ripped this flag, and it's being thrown off the side of a building, so that you feel something," said Fuqua.

Perhaps Fuqua's stated patriotism helped the "Olympus" production gain access to former Secret Service agents, who consulted on the script so that the events following the North Korean invasion played out as true-to-life as possible. The director even suggested he had top-secret information: "Some things I can't say," he said cryptically. "There are some things they told me that I had to leave out."